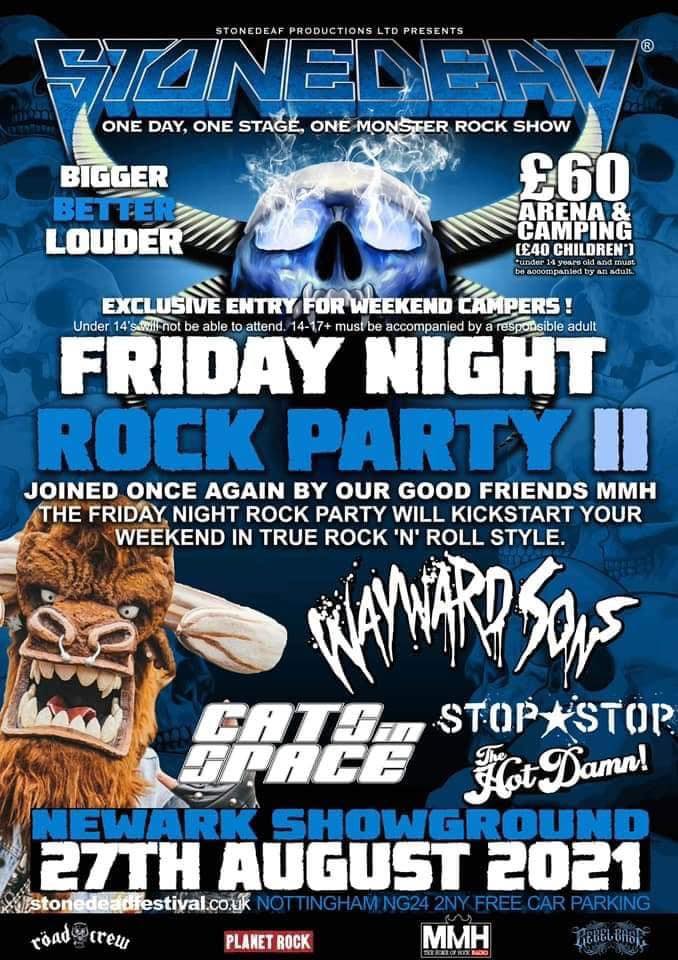 The gates to the arena opened at 5.45pm. MMH DJ Mitz (presenter of the Rock ‘n’ Roll Penitentiary) opened the rock party, with some killer tunes.

Krusher Joule then announced the first band, The Hot Damn!

Just before they entered the stage, a man dressed as a giraffe came dancing onto the stage and got everyone smiling, and ready for the live music to begin. For many people, this was their first festival for 2 years, and they were ready to party.

The band were very entertaining and looked relieved to be performing for us all. They treated us to some proper rock ‘n’ roll. The bassist Lzi especially, not only treated us to some amazing sounds, but also had a very energetic stage presence. The audience seemed to really enjoy the band and were happy to sing and dance along with them. They had a very powerful aura and played a blinder.

An excellent choice in my opinion to start off the party in style.

Next up was another DJ set from MMH with Tina C. (presenter of the Early Bird breakfast show). The audience were clearly enjoying the music and were dancing and singing along, the set included a live on stage video call to MMH’s terminally ill legendary breakfast show DJ Mr Tony Heare so the Stonedead family could make Tony a part of this festival that he so dearly wished he could be at, not a dry eye in the house as radio boss Adam Till held Tony high above the stage via video call.

Krusher was then back on stage to announce the next band, Stop*Stop.

Stop Stop are a 3-piece band, originally from Barcelona. After becoming frustrated by the Spanish music scene, they pooled all of their resources together and bought themselves a van. After filling the van with all of their equipment, they came over to the UK. To begin with they had to sleep in the van, then made some friends and slept on their sofas/floors. After becoming a hit on the UK tour scene, they then managed to rent a flat. Their dedication proved fruition, and many festivals in the UK and Europe soon began to book them.

The audience were hooked from the first track, to the last. Stop Stop kept the crowd engaged during the entire set. I thought they were a perfect addition to the Friday Night Party. For me, there seemed to be a bit of a Kiss influence for their make-up and performance, and a bit of AC/DC with some of the dance moves. During the set, the drummer Danny, had a solo performance, and even took a small drum out with himself into the audience. This went down extremely well.

The band were fun from the first note to the end note. Their performance is a perfect mix of visual and audio entertainment.

MMH DJ Caz (co-presenter of Rock n Roll Penitentiary – The Other Side), was next up with her set. Caz kept the audience well and truly entertained, with them singing and dancing along whilst waiting for the next band. Her set was increased to 50 minutes, due to the next band being late to the stage. That is festival life though, and you always need to be prepared to extend your set if needed. Caz handled this with ease and professionalism.

Along came Krusher again to introduce CATS in SPACE

Cats in Space describe themselves as “…THE MOST ORIGINAL CLASSIC ROCK BAND SINCE THE 1970s!…”

Once the band arrived on stage, they were full of energy. The vocalist, Damien Edwards has a very impressive vocal range, which he used extremely well. The full band were quite enjoyable to watch, although they weren’t really ‘my cup of tea’. It seemed that the crowd would have disagreed with me though, as they seemed fully entertained!

Back to another MMH DJ set once the band had left the stage. This time was the second stint for DJ Mitz. Mitz kept the audience fully engaged, and lots of singing (not always in tune!) and dancing were evident until Krusher returned to the stage to introduce the Friday Night Party’s headliner…..

British Rock band, Wayward sons released their debut album, Ghosts of yet to come, in September 2017, and the band consists of: Toby Jepson on Vocals, Sam Wood on Guitars, Nic Wastell on Bass, Phil Martin on Drums and Percussion, and Dave Kemp on Keyboard.

The band are set to release their third album, Even up the Score, later on this year (2021). This follows on from their 2nd album (my favourite of the first 2), The truth ain’t what it used to be. Released October 2019. There are a variety of other acts that the band have been involved in, including, but not exclusively: Little Angels, Gun, Fastway and Dio’s Disciples.

I have managed to see Wayward Sons a couple of times before today and was definitely ready to see them again. Once on stage the band burst straight into performing. They are an exciting, energetic band. With their performance being tight, faultless and together.

The crowd were definitely ready to see the band, and sung along, and danced to the entire set. The band expertly combine knowledge of their instruments, with pure rock & roll vibes. If you are yet to see this band, and you enjoy rock music, I would definitely recommend giving them a go.

To close the show was MMH DJ Adam Onslaught (presenter of the Global Onslaught show). Unfortunately, due to previous delays, his set was cut from 30 minutes to around 3. He managed to play the beginning half of War pigs, Black Sabbath. All sound has to finish by 11pm to protect those living nearby.

We were thoroughly entertained this evening, but still have more to come tomorrow ‘See you at the bar’!!!