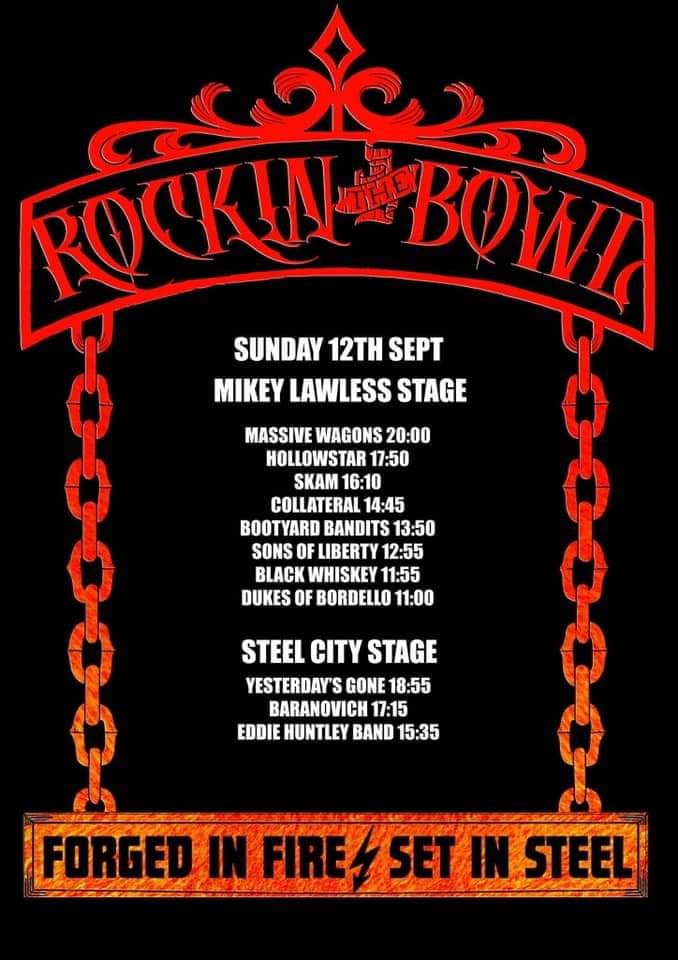 Special thanks to compere – Pete K Mally; the man, the myth, the legend. Genuinely a lovely bloke, funny and engaging, and trying his best to sell a book or two. He made the weekend a better place with his smile and banter.

Described as “snot nosed rebellious rock” Dukes are a band who take no prisoners with their high octane, no nonsense rock with a touch of punk thrown in. They have a strong set which starts the Sunday off in the right manner; no excuses, no hangovers, we are here to rock n roll.

They have a full length album ‘Lowdown n Dirty’ and an EP released in 2020, ‘Deaf or Glory’. Find them on facebook https://www.facebook.com/TheDukesBordello

“The UK’s own original Hard Southern Rock Band!….a group of passionate and experienced musicians who were there the first time”, this hard hitting southern rock n roll band have been gracing the stage since 2014, releasing their first EP ‘Shinola’ in 2018, quickly followed by another ‘Aged in Oak’, their debut full length debut album ‘Animism’ in 2019, and their latest release is ‘Aces and Eights’.

They put on an authentic show which is guaranteed to bring out your inner cowboy (or girl) and in 2020 the band were voted #4 band of the year by the New Wave of Classic Rock community and featured on ‘The Official New Wave Of Classic Rock – Volume 1’ compilation CD, reaching #10 in the official UK Charts.

‘Damaged Reputation’ was the first single from their latest album and has a thumping drum intro, hard-hitting bassline and those familiar growling vocals of Rob Cooksley. My favourite track is ‘Rich Man, Poor Man, Beggar Man, Thief’ from their ‘Animism’ album, which is a touch more country and catchy as hell!

They put everything into their live performance and never disappoint.

A little ‘Smoke on the Water’ on the banjo (yes, that is what I said) gets the crowd whipped up and this continues with the suggestive ‘Ladies Man’, my song of the set. There is a good degree of comedy but those vocals are sexy as hell. A big shoutout to the drummer, who was mesmerising throughout.

Fab set and a band I will be looking for again.

A band many will have come just to see, Collateral have been super busy making a name for themselves on the new wave scene, and also the acting business as lead singer Angelo was cast as a young Steven Tiler. FFO ‘80s rock, hair rock, AOR and Bon Jovi, if you haven’t heard Collateral – what the hell..?

I had the pleasure of reviewing both their debut EP and album in a former life and loved both! I’ve seen them a few times now and they, supporting Jared James Nichols, were my last gig pre-Covid.

This is a must-see band with ferocious energy, scintillating guitars and soaring riffs, alongside powerful, melodic vocals with a warmth and sensuality. The lead singer is a natural performer and holds the audience in the palm of his hand, oozing charisma, and making eye contact with as many people as possible.

‘Bigshot’ gets the crowd dancing and singing along, ‘Promiseland’ is a favourite of mine, seductive and building to a huge chorus. ‘Merry Go Round’ gets me in my cowgirl feels, reminiscent of Bon Jovi at their best. ‘About This Boy’ is simply beautiful and compelling, and ‘Lullaby’ closes an incredible set.

The band have such presence and finesse it’s fantastic to see them live again. Please don’t make the mistake that this band is anything other than a genuinely talented, original and hugely entertaining UK rock band. They look good but they sound great!

I heard from Angelo himself that they are re-releasing the album with a few special guest stars, including Danny Vaughan and, one of my rock gods, Jeff Scott Soto. Wow, I can’t wait for that.

Take a look at their website https://collateralofficial.com/ and have a listen to their music

Worth the ticket price alone. The first time I saw them supporting Stone Broken with Those Damn Crows they blew my mind. I loved everything about Hollowstar from that first moment; the way they interact with the audience, their profound honesty and integrity, and most of all the fact that they deliver kick ass music!

If Hollowstar come near your city, it’s a no brainer that you must go. They bring their debut album to life in a live show in a way that few can match, and they have grown and developed in confidence over the last few years so that you are assured of a show you will not want to go home after.

‘Take It All’ starts the show, making a statement and setting out the intent to rock our socks off. The confidence and vitality is insane, Joe Bonson’s lush vocal reaches out across the arena, the band bringing their A game as they power through a set which sees all of their ‘H’ album, as well as ‘Sinner’, ‘Feel the Burn’ and a couple of covers; 500 Miles (Proclaimers), Wishing Well (Free). They are sensational. Standout for me is always ‘Invincible’ – this is my jam, I may have mentioned…

They describe new guy Carl as a “50p budget Kris Barrass” which has the audience in stitches as he does indeed bear a striking resemblance.

I could wax lyrical about this band all day but sufficed to say, their set is outstanding and the performance of the day for me. The crowd were singing and bouncing in unison and there was a brilliant atmosphere which made for an unforgettable experience. It’s so good to be back, baby!

Hollowstar have soul, they have rhythm, they have a whole lot of talent and the ability to go all the way and pleasure our lugholes (ears) for a long time to come. Don’t miss the ride.

Find out more at https://hollowstar.uk/

“Wagons are a live band” – so many people have told me this but I hadn’t seen them live (unbelievable yet true). I now find, that statement is so true – there was no roof to raise but they would’ve torn straight through it at Rockin the Bowl!

The stage was hidden, and press weren’t allowed backstage, so it was obvious there was going to be something special but this was next level.

Baz was tearing round the stage, throwing his hair back and devouring the attention from a crowd who could not have been any more enamoured and attentive.

They absolutely smash the headline slot and leave everyone there wanting more. Confetti canons, flames and pyrotechnics made the set extra special but the reality is that Massive Wagons rocked the hell out of Sheffield! Wagons are a live band and you don’t want to miss it.

Setlist: In It Together; China Plates; Pressure; Bangin in Your Stereo / I Fought The Law / Sitrender; The Day We Fell; Hero; Sad Sad Song; Ratio; Hellascrewya; Nails; Fee Fi Fo Fum; House of Noise; Encore: The Curry Song; Tokyo; Back to the Stack.

A relatively new band, their style is bluesy with a little Jamiroquai funk and a touch of stoner rock. Inspired by the greats BB King and Jimi Hendrix, Eddie describes his sound as positive and relatable.

They were engaged with the festival from before the gates opened and interacting with bands and gig goers alike through social media, genuinely seeming like good blokes excited to be there.

Despite recently undergoing a kidney transplant the band played 2 sets, 1 full and 1 acoustic. I was worried he may need a sit down a few times but he powered through like a pro!

Today is a given, Tomorrow is never certain but one thing remains, “Yesterday’s Gone”

With a fabulously dirty rock and blues sound, Yesterday’s Gone are going far. They released their second EP ‘Set in Stone’ Friday 17th September and it’s one to watch for.

YG rip into a great set that no doubt wins them, some new fans! A storm is brewing here in the tent and Rob Walker is at the helm.

Headlining the Steel Stage today, the set is 14 tracks long.

‘Demons’ goes down well, and ‘Whiskey Chaser’ is a favourite for me – a heavy hitter with a gritty vocal and catchy chorus.

Setlist: Rock n Roll; Break Me; Demons; Roll The Dice; Keep on Marching; Ride or Die; Inside Me; Whiskey Chaser; Into the Sun; End Up Like Me; She’s So Lonely; Mine All Mine; False Smiles; Greed

Also on the bill:-

Wicked Jackals – so sorry to miss this, they were a last minute addition and I’d gone for food!

Thank you to Steve and Zhany Hughes for creating this festival, seeing it through from concept to reality, sticking with it through 2020, and bringing it back bigger and better. Born and raised in Sheffield, I can’t tell you how great it is to see something of this calibre come to the city – long may you reign, I’ll be there again next year.

To all the bands, staff and volunteers, thank you from the bottom of my heart.

See also our highlights of Day 1 and Day 2