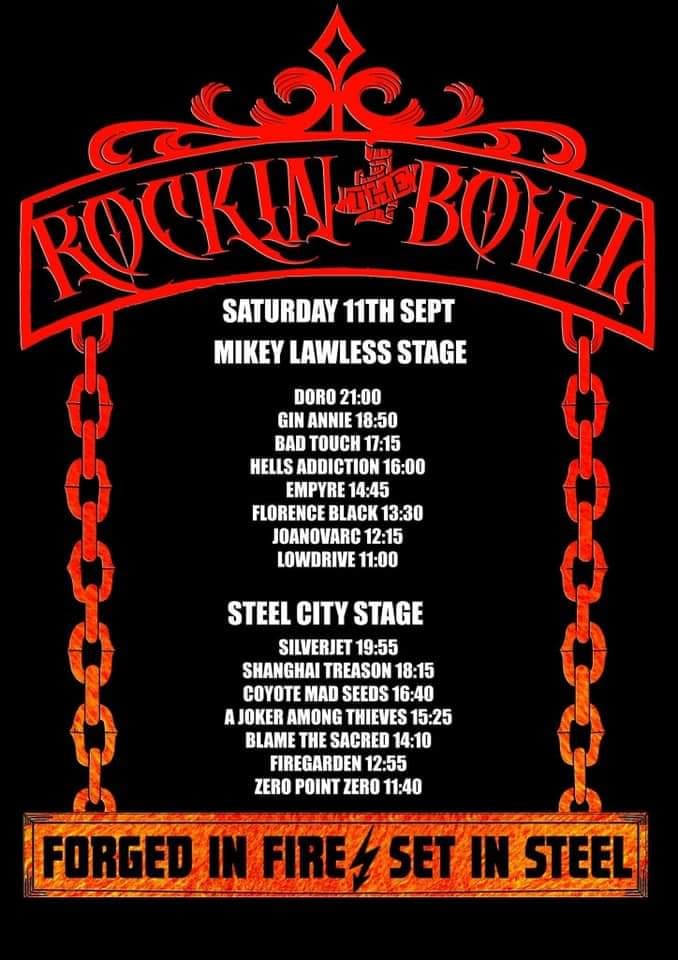 Rock emcee, stand up comedian, author and science teacher, Pete also has his own radio show – ‘The Pete K Mally Breakfast Show’ every Saturday 10am to noon at MMH-The home of rock radio.

Pete did a fantastic job keeping us all entertained and introducing the bands. His crowd interaction as a compere is unparalleled. Excellent job. We love ya Pete.

Hard rock band Lowdrive features former members of Goat Leaf & Warrior Soul and have been going since about 2016. Their debut album ‘Roller‘ was released via Cargo Records in 2018 and they are currently working in the studio on the follow up, tentatively scheduled for release in early 2022.

They have a deliciously grungy-stoner sound and play riff-fuelled dirty, retro alt rock with attitude. ‘Roller’ is an anthemic grunge-fest which sets my feet stomping each and every time. I adore Andy Sawf’s vocal and guitarist John Hodgson plays some pretty sexy solos.

Fab band you need to see – you will end up buying the album, I guarantee.

Find out more at https://www.facebook.com/Lowdrivemusic

Anybody who has ever met, spoken with, or even seen me, will know that I am a massive Florence Black fan, with just about every item of merch they have ever produced and all their EPs on repeat. Listening to them with my eyes closed is quite simply one of my favourite things in the world, and seeing them perform live again is even better.

Florence Black already have 3 successful EPs behind them and release their highly anticipated debut album this very week! I’m so excited I could wet my pants!

Perry beats the living bejeezers out of a drum kit, Fozzi is exceptional on bass duties, and Tristan is simply incomparable on vocals and guitar. These guys are masters at their craft.

The set has a bit of everything from their EPs and the pending album, including my beloved ‘Ghost’ from their first EP, which remains my favourite to this day. They have a hard and heavy, unique sound and the show at Rockin the Bowl is simply phenomenal. Everyone I spoke to agreed it was a blistering performance.

Bar the Massive Wagons set, this is the performance of the weekend.

Make sure you familiarise yourself with this amazing band https://www.florenceblack.uk/

BBC Introducing said “No stage is too big for these guys” and they are correct. From the second they walk onto the stage, the audience is in the palm of their hands as they belt out 7 (I think! – I was enjoying myself) tracks in a blazing set with songs from their debut album ‘Self Aware’ and a new song.

The band have been growing a name for themselves, and a good solid fanbase, over the last few years, appearing at Breaking Bands and Wildfire amongst others. They are touring right now with Mason Hill and Hollowstar – what a lineup – so make sure you catch them.

Take a look at their website to find out more about Empyre https://www.empyre.co.uk/

Bad Touch originally formed in Norfolk in 2010 when the band members were still in college and played covers in local pubs, and they gradually began to compose original material. Over the last few years Bad Touch have started making huge waves as one of the “must-see” bands, their live show always exciting and memorable.

They have 6 studio releases under their belts, the last two being the most well known and highly acclaimed by fans and critics alike. Their sound is southern inspired rock.

This is a band who always deliver and put on a fun, energetic show that gets you singing and dancing along.

Their website is here https://badtouchrocks.co.uk/ go take a peek

I discovered Gin Annie just before they won Highway to Hell in 2018 – well deserved winners I might add. Part of the prize was a record deal with Off Your Rocka and their album ‘100% Proof’ was borne to rave reviews and a whole boatload of live shows, supporting the likes of Ugly Kid Joe, and Geoff Tate, and headlining, and indeed they were scheduled to headline Ramblin Man’s Rising Stage in 2020 & 2021.

The set included some of my favourites ‘Dead and Gone’ and ‘Fallin’ before closing with the epic ‘Born to Rock n Roll’. They came, they saw, they conquered, and they probably sold a shit load of merch.

Love these guys to the moon.

Headlining the Saturday night, leather-clad Doro gave a stunning “greatest hits” show demonstrating just why she is the Metal Queen. With plenty of Warlock tracks and a Judas Priest cover, all hail the queen.

Born Dorothee Pesch, Doro is a German heavy metal singer now living in the US and the former frontwoman of heavy metal band Warlock.  Her popularity as an iconic singer has inspired many new female metal artists, and she is known for her duets, both live and in studio, with fellow metal singers, including Lemmy.

To date, Doro has released 17 studio albums, the latest being ‘Forever Warriors, Forever United’ in 2018.

The performance for Rockin the Bowl is nothing short of majestic.

A local band, and a personal favourite, Firegarden light up the Steel Stage with their brand of prog inspired rock which captivates the audience.

With an impressive back catalogue of 8 albums, this band have been around for a while, their last album ‘Voyage to Crab Mountain’ was released in March 2018. Being of a prog sentimentality a lot of their songs are quite lengthy but you just don’t want them to end!

The band are aflame today and it’s literally the best gig I’ve seen them do as they take the audience from ‘1649’ ‘Ride the Storm’, on a journey through crab mountain – ‘Mountain’, and my absolute favourite ‘Crabs’ – and then back to ‘Firebird’ and ‘The Circle’.

The talent is unreal, each musician at the top of their game and playing together seamlessly in unison. The vocals, though he would never admit it, are wonderfully husky and entice the listener in for more. I’ve described them before as “melodic classic rock vocals giving way to a piratical melody and dramatic vaudeville style monologue” but this doesn’t begin to do them justice – as a three piece they build a huge wall of sound that is so intricate and detailed you don’t know where to start in trying to describe it. I will always love Firegarden. Long live prog n roll.

I featured ‘Crabs’ in my Repeat Offenders article earlier this year https://mmhradio.co.uk/repeat-offenders-34/

A Joker Among Thieves

One of my ‘finds’ of the weekend, this band blew me away with their sound and the fact that they either don’t know just how good they are or are very humble and down to earth. I will definitely be checking them out again and the sooner the better – no idea why I haven’t come across them til today!

They describe themselves as “a tuneful, riffy heavy rock 3 piece” but this is an understatement. They have a fresh and exciting sound, gravelly vocals which can suddenly switch to become incredibly melodic, a great rumbling bassline and some strong guitar solos, which makes for an all-round impressive set.

‘Swinging’ opens the set with an undeniable bluesy quality and, for 3 guys on a small stage, they have a massive presence and sound as they power through track after track and, I have to say, I’m a little bit in love with the vocals. ‘Stomp on My Heart’ has a killer groove and growl in the vocals which I absolutely love, and ‘Zombie’ is simply addictive. I am waiting with bated breath for the next single ‘Don’t Run Away’.

I couldn’t see any merch when I looked but I will be back!

Go check them out https://www.facebook.com/AJokerAmongThieves/

Definitely “full force balls out rock n roll” CMS have a face-melting set. ‘Jaded Son’ opens with a dirty riff and pounding drum beat, the vocals soaring in that incredible chorus. ‘Get Outta My Way’ from their 2017 EP is impossible to not engage with! I love this song. There were a couple of newer songs ‘Cavalry’s Call’ and ‘Wish You Well’, and the fabulously metal ‘Extremis’ and ‘No Way’ which whip the tent into a frenzy and anarchy ensues.

Coyote Mad Seeds is a band that begs to be heard. Find them on facebook https://www.facebook.com/CoyoteMadSeeds

This band of “Banjo punks” deserves a write up if not simply for the fact that their set had the most impact on the crowd in the tent. The audience lapped up their breakneck speed Celtic punk set and the whole tent was jumping up and down as one throughout. Great fun and some cracking songs.

Also on the bill