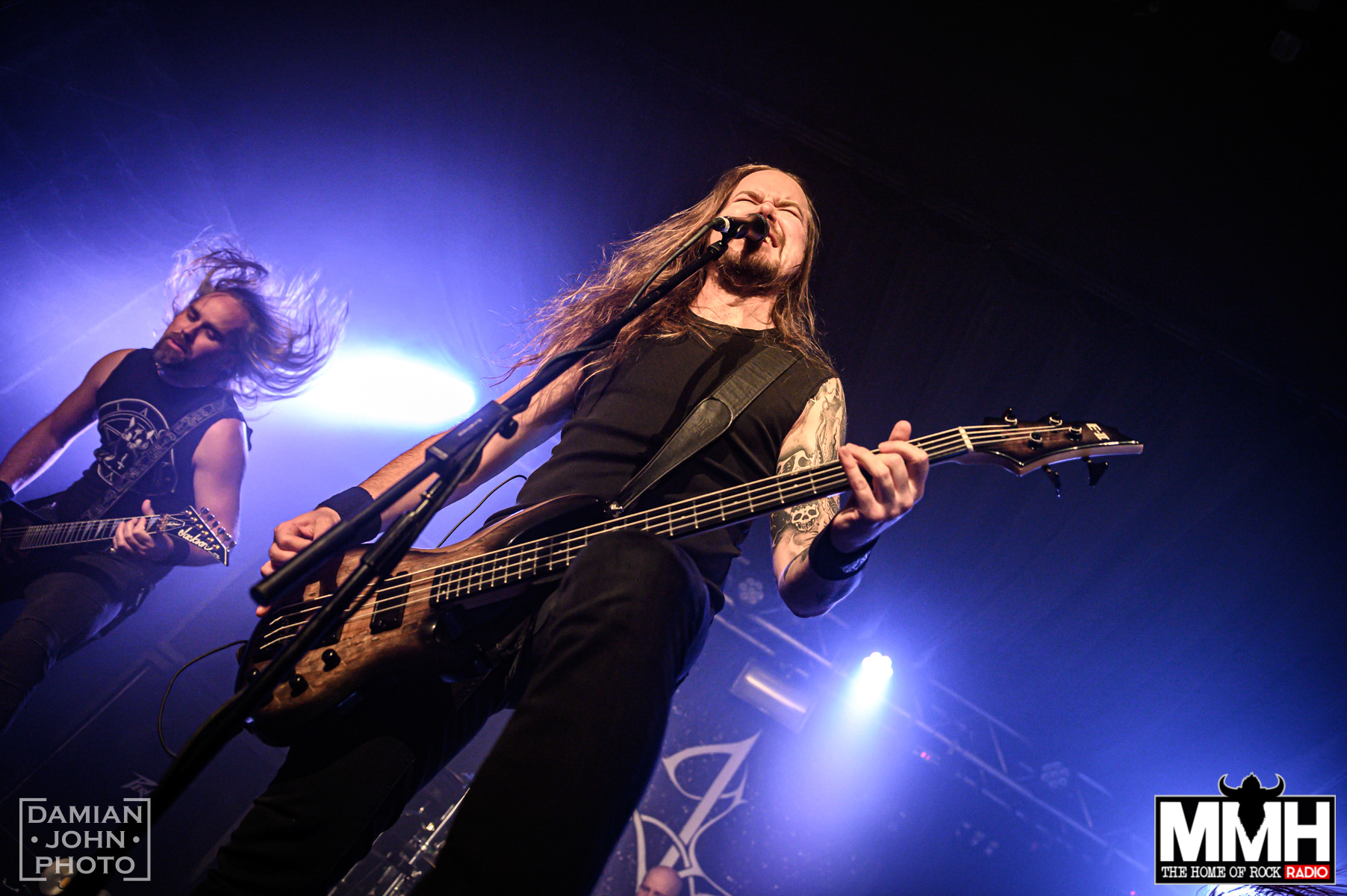 ‘We are Insomnium… from fucking Finland!’
On a bitterly cold Friday night in January, the upstairs room at the O2 Academy in Birmingham slowly filled out. As a sea of metalheads gradually began to defrost, the lights went dark and the opening broken chords from ‘Behold the Swine’ started to ring out and Conjurer took to the stage. The UK’s best-kept secret in sludge metal and ferocious, downtuned riffs, although likely not for much longer, it is easy to understand the real buzz around Conjurer at the moment while witnessing their live show. Playing the first two tracks from 2016’s I EP before the crowd opens the first moshpit of the night to 2018’s ‘Retch’, the band are extremely tight but without losing an ounce of energy, with bassist Conor Marshall (who recently joined Sylosis) windmilling his hair furiously at every opportunity. Comfortably flitting between heart-stoppingly fast speeds (Retch, Choke) or devastatingly slow tempos (Hollow, Scorn), it is hard to believe the boys have been active for barely five years. Closing with ‘Hadal’ from 2018’s Mire, which is fast becoming a modern classic, they depart the stage triumphantly. If there’s one point of commentary, it seems the crowd here tonight are less energetic than at most of their shows, whether supporting or headlining. Yet with Conjurer’s trajectory it’s only a matter of time before they headline this room, or even the bigger one downstairs.
A loud cheer erupts as Insomnium take to the stage, and the crowd are notably more animated throughout. With only two bands on the bill, Insomnium treat their fans to a bumper 13-song set, mostly drawing from Heart from a Grave, only released in October. Now active for almost 23(!) years, the band are like a well-oiled machine at this point in their live careers. Opening with a particularly epic-sounding ‘Valediction’, the band’s infectious energy starts from the first second and doesn’t drop. The fans are in awe throughout, with a wild moshpit taking a permanent residence in the centre of the room almost from the outset. Insomnium’s own brand of melodeath, more importantly than anything, feels good to listen to, with catchy, sing-along parts that invite wide audience participation. The loyal fans scream back every single word. A huge roar goes up as the opening chords of ‘Pale Morning Star’ ring out, and one of the best pits of the night erupts. It is a cliché that ‘true’ metalheads will always prefer their favourite bands’ old material, but Insomnium’s new tracks are so good that it’s not relevant in this room.

The crowd roar as they are treated to an older song in ‘Change of Heart’. Crucially, the band also look like they’re having fun. Smiling and headbanging, lead guitarist Markus Vanhala pulls up his Flying V and fires at the crowd as if from a gun. Tearing through a few more tracks, including a well-received one-two of new tracks in the form of ‘And Bells They Toll’ and ‘Mute is My Sorrow’, it is easy to remember that Heart Like a Grave peaked at Number One in the Finnish charts with fans this devoted. The last notes of ‘In the Groves of Death’ die out and the lights dim – briefly. A jubilant fan jumps onto his friend’s shoulders just before the encore starts. Fortunately, in view of health and safety, he gets off before the crowd erupts for a final helping of tracks. The moshpit regulars show no sign of tiring out as Insomnium tear through ‘The Primeval Dark’ and ‘While We Sleep’, both from 2014’s Shadows of the Dying Sun. Insomnium ought to act as inspiration for many younger bands, as they dominate the room with their masculine yet very fun stage presence. Their ability to fire on all cylinders both on stage and in the studio in their third decade of existence is no mean feat, as they prove for one final time, with the title track from Heart Like a Grave whipping up one final frenzy from the fans for the night. The band depart triumphantly yet gratefully, knowing not to take their spot in the metal universe for granted. Yet tonight shows exactly why they deserve everything.