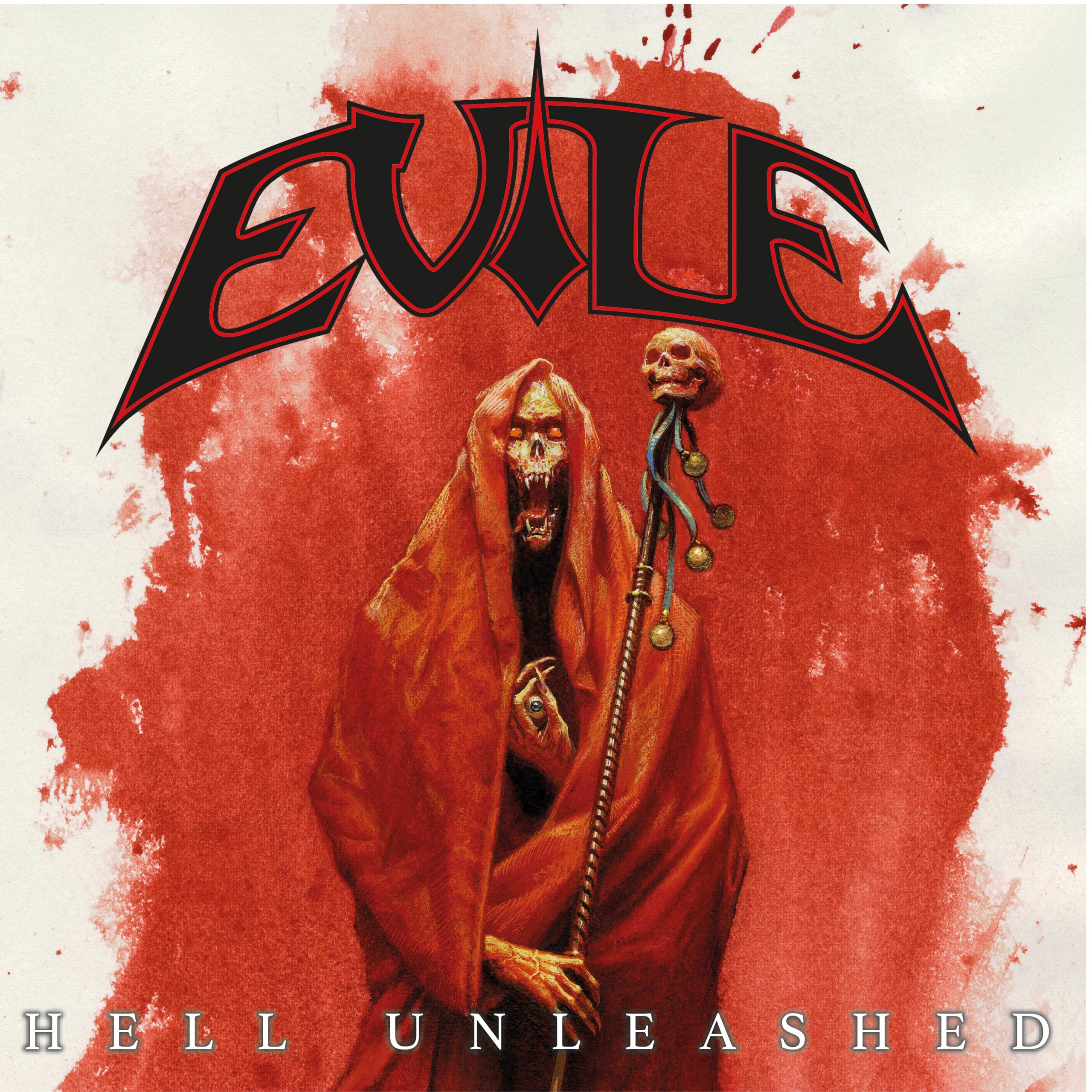 When I first got into heavy music, a frankly terrifying number of years ago now, I was obsessed with thrash metal. This was thanks in no small part to Evile being one of my gateway bands. While some people cite their peers Municipal Waste as the leaders of that wave of thrash revival, Evile’s more musically ambitious take on the genre set them head aand shoulders about the competition for me. After their fourth album, Skull, the band hit an impromptu hiatus with the departure of lead guitarist Ol Drake. Now eight long years later, Evile are back with a slightly rejigged line up and a new album. Does Hell Unleashed recapture my childhood obsession?

The most obvious change on Hell Unleashed is the vocal approach. Previous vocalist Matt Drake has left the band, with Ol Drake replacing him. Ol’s vocal approach is obviously much harsher and less melodic that Matt’s as soon as he comes in on opener Paralysed. This isn’t death metal by any stretch of the imagination, so if that’s not your jam I wouldn’t be put off here. Ultimately whether you prefer this or the previous vocal approach is going to be a matter of personal taste, but I quite like it. I would prefer a little more force behind the barks, especially on War of Attrition. That little extra push would just help these tracks feel that bit more aggressive that the need to really land.

Even dating back to their debut, Enter The Grave, Evile have been masters of constructing songs with interesting and complex song structures with plenty of distinct sections in each song. This frequently comes with shifts in tempo, which can be exhilarating like when the pace picks up on the labyrinthine Incarcerated but it lacks what I often consider to be the best attribute of thrash. When the tempo cuts on Angel of Death, it feels like all the breath has been sucked from your lungs- it has incredible impact. Here we don’t ever quite get that feeling of running headlong into a brick wall, even if the increases in pace do hit the part of your brain that generates adrenaline in just the right way. It’s a bit of a shame in my view.

Every member of Evile, both past and present, have consistently been top tier instrumentalists. They’ve always been tight and in sync, even when playing technically challenging music at high speeds. That’s still true here, and maybe it’s down to my gravitation towards more chaotic music in recent time, but it feels like a bit of a weakness here. Despite the speed, it never makes me feel like I have to cling on for dear life, like some of my all-time favourite music does. That’s because the band is so tight and precise that the songs never feel as though they’re about to collapse in on themselves, it doesn’t feel dangerous or suspenseful like it should do. It feels a bit strange to criticise a band for having too high a standard of musicianship, but here we are. In a recent Repeat Offenders article, I spoke about a band called Intoxicated who had a bit of chaotic sloppiness to their thrashy sound that made the experience so much more fun and thrilling. I suggest checking them out if you want to get what I’m talking about here.

I expect a high standard of riffs from Evile, and we get that here. The Thing (1982) is a treasure trove of great thrash riffs as is Control From Above. The best riff of the album might be on their cover of Mortician’s Zombie Apocalypse, but it’s a close-run thing which says a lot. There is one feature of the Evile sound that I feel is missing from the album that really harms it for me. Ever since their second album, Infected Nations, Evile have has a very distinctive sound to their lead guitar melodies. It’s touched on, very briefly, at the start of Paralysed here. This lead sound and approach is so tied to their identity for me that I still mentally refer to them as “Evile leads”, even if I have to talk about the rare bands who do similar things. It feels like such a step backwards to not have these lead guitars singing through, so much so that I actually went back through their back catalogue to make sure I wasn’t over estimating their presence and crunched the numbers to see how many times per track this feature appears on each album. Other than Enter The Grave, Hell Unleashed has the fewest individual uses of this technique, and the lowest per track average. I don’t really understand why this is the case, why so drastically cut such a unique element of your sound?

It feels bad to be so down on a band you once loved. Part of this is due to the development of my own music tastes in the intervene years but there are aspects of Evile’s song writing on Hell Unleashed that I don’t think hit the quality standards that I would expect of them. I often ask myself when listening to modern thrash bands, why I should listen to this album rather than Reign In Blood or Master Of Puppets. I felt strongly that there was a reason for this on older Evile albums, even with my nostalgia goggles removed. Hell Unleashed struggles to cross that bar, it is by no means a bad album, but it’s not the album is should be based on the standards Evile themselves has shown they can perform in the past. Maybe next time around I’ll fall back in love again.

Hell Unleashed is out Friday 30th April via Napalm Records and can be purchased here.