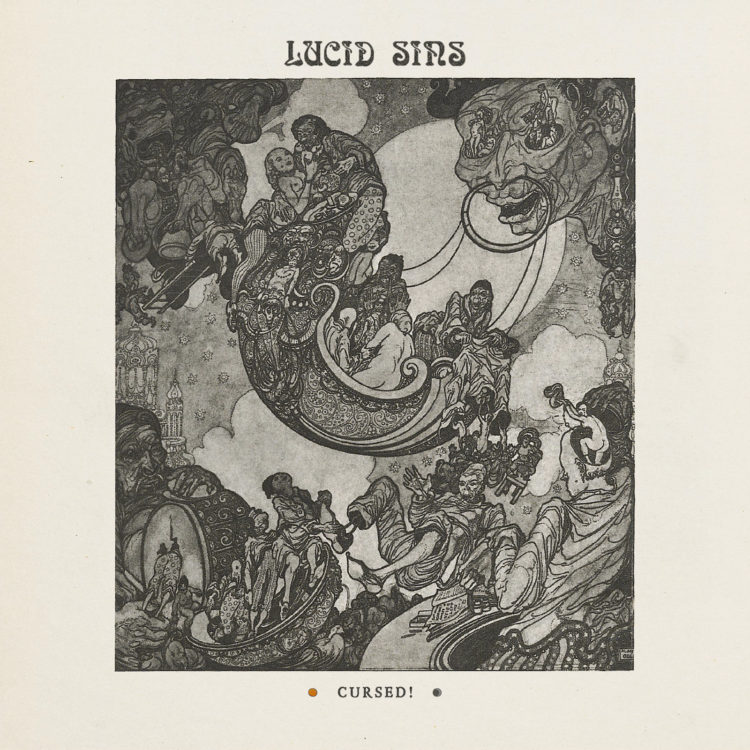 Scottish two-piece Lucid Sins are best described as a 70s progressive rock band with tones of psychedelia and the occult. It’s been six years since their debut album Occultation yet despite such a lengthy gap between releases, Lucid Sins have lost none of their retro charm. Cursed! is a welcome return for the band, heading into a more progressive direction with a host of various musicians joining them to elevate their sound. I’m immediately drawn to the incredible album artwork, the intricate and surrealistic details proving to be an accurate representation of the band’s aesthetic and overall sound.

Opener Joker’s Dance begins with a light and jaunty riff, the vocals floating and moving like a cascading wave. There’s such a consistent ethereal quality to this track, curating a deeply relaxing vibe. This is followed by The Serpentine Path, an immediate switch with a heavier guitar tone backed by marching style drums. The bluesy guitar melodies and solos have a certain hypnotism to them akin to a snake charmer.

Beginning with a Deep Purple style organ, Sun and the Moon has such a beautiful meditative quality throughout, encouraging thoughts of the sun rising across a wide open grassy plain. There’s real indulgence in the instruments here with a 3-minute span of enticing guitar solos and angelic vocal melodies.

The tone then shifts to one of melancholy with The Devils Sign effectively creating an ominous ambience. There’s a shift in tempo where a new form of life is breathed into the piece, the guitar melodies frolicking alongside a haunting violin.

With waves of distortion title track Cursed begins, complete with a playful guitar riff and vocal melodies snatched straight from the 70s. At just over six minutes long, the track is one of the longest on the album with real room for the listener to become lost in the instrumental jams and mystical themes.

Snake Eyes is foreboding and devilish, the intro riff creeping like a stalker in a midnight forest. Following in a similar darker wave to Cursed, there’s such brilliant little intricacies in this track such as the vocal delivery of “Roll the dice” cleverly embodying that of a snake’s quintessential hiss. And to top it off, there’s a fantastic Black Sabbath infused guitar solo towards the end.

By Your Hand returns to a musically lighter tone yet the lyrics are anything but, speaking of risky deals and a man struggling to stay alive. Album closer Forest is another meditative track, containing a vast selection of riffs and a beautiful instrumental segment towards the end.

Cursed! is such a promising release from Lucid Sins as they venture into more progressive territory whilst fully embracing psychedelic tones. There’s such a purposeful balance to the album as it begins with such a freedom and lightness whilst the second half embraces the occult and darker themes. Due to its contemplative character, Cursed! would be the perfect album to play whilst walking in nature or following a creative pursuit such as drawing or painting.

However you choose to listen, Cursed! is an album worth checking out.

Lucid Sins are a part of Totem Cat Records