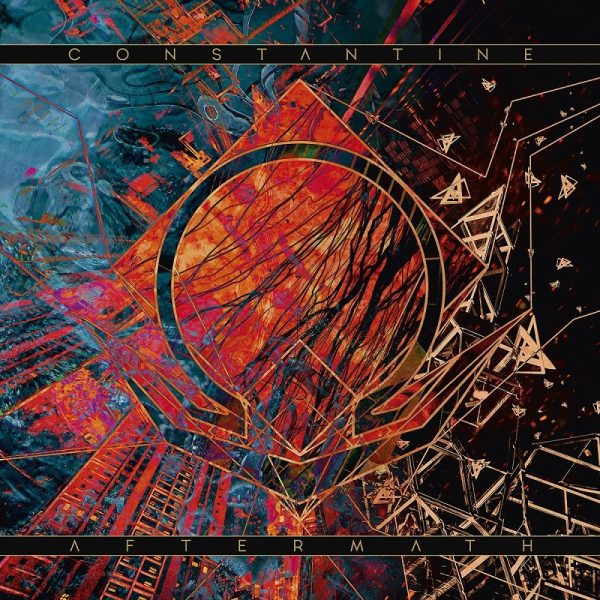 Fast guitar players are a dime a dozen these days. The more ‘shred’ albums that are released the more difficult in becomes to impress and gain a significant amount of attention for any particular one. One of the most prominent recent releases from the genre is Controlled Chaos by Nita Strauss (released in November last year), and the reason for its positive reviews came from Strauss’ ability to blend the guitar wizardry of her heroes with a very contemporary metal sound. Aftermath, the second album from Greek guitarist Constantine, promises something similar: a ‘collection of songs that cover the whole spectrum of the heavy metal genre’. To help achieve this feat he has harnessed the talents of an impressive array of guest vocalists, including Bjorn “Speed” Strid (Soilwork) and Ralf Scheepers (Primal Fear) amongst others. Epic and monumental melodic metal would be the order of the day it seems.

Aftermath opens with its only instrumental track: “Bushido”. Cramming all of Constantine’s considerable talent into one friendly sub four-minute package, it opens with a rapidly picked major riff that sounds refreshingly sparse on the production front. There are no backing instruments other than drums and bass to allow the riff to speak for itself. When the synths and rhythm guitars are introduced for the chorus it adds that extra bit of impact, but the focus is still the guitar melody. It will stick in your head for days. For full effect it should be listened to while viewing the ridiculously wide power stance Constantine adopts in the music video. I expected epic melodies and “Bushido” certainly delivers.

After such a strong start I was rather disappointed at the mixed bag the rest of Aftermath turned out to be. Bjorn Strid brings all the confidence he has on Soilwork’s recent album, Verkligheten, to his part on “Hellfire Club”, adding life to what would otherwise be a fairly immemorable song. The same can’t be said for “Press on Regardless”. Ralf Scheepers is in predictably fine form, but the run-of-the-mill riffs and sluggish chorus can’t be saved by even him. The blend of power metal and AOR used on “Another Day” will be familiar to anyone who listens to the regurgitated melodies churned out by the Frontiers Records factory. Regardless of how often this sound is used, it’s still catchy as f**k, only this time round it is ruined by a poor performance from Apollo Papathanasio. When the chorus hits it sounds like a badly recorded live version, where his voice sounds thin and isolated, with none of the power and breadth you would want from a song like this. Alongside Strid, the strongest vocal performance of the album is put in by Chris Clancy (Wearing Scars) on “Holding on ‘til the End”. His note-perfect and powerful performance carries the best chorus on the album, and compliments rather than overpowers the lead guitar melodies. It wouldn’t be a complete melodic rock album without a four-chord chorus in there somewhere, and this is kindly supplied by “Elegy” (feat. Bill Manthos on vocals). It goes for the mournful melodic approach, and the superb guitar solo ends the album on a high note.

It is strange that a review for an album by a guitarist doesn’t actually mention the guitar work that much… But that is the problem with Aftermath: all the styles and techniques used are already abundant in the melodic/AOR/power metal scene, so instead I found my focus drifting to the delivery and melodies of the various vocal performances. “Bushido” is the notable exception and is a genuinely excellent instrumental guitar track: guitarists would kill for the overdriven yet crystal clear tone, it has melodies that are instantly engaging and don’t get boring, and a main riff that allows Constantine to show off both his creativity and his playing speed. It’s just a shame that the rest of the album has little to no differentiating features from the type of melodic metal that the scene has been saturated with for years. Maybe this reflects badly on the scene more than it does on Constantine’s writing ability, but an album goes from good to great when it can do something unique and do it well. Constantine may be an incredibility gifted guitarist, but “Aftermath” does little to lift itself above the masses.

Highlights: “Bushido”, “Hellfire Club” and “Holding on ‘til the End”

Aftermath is available from 31st May via Rockshots Records and can be purchased here.