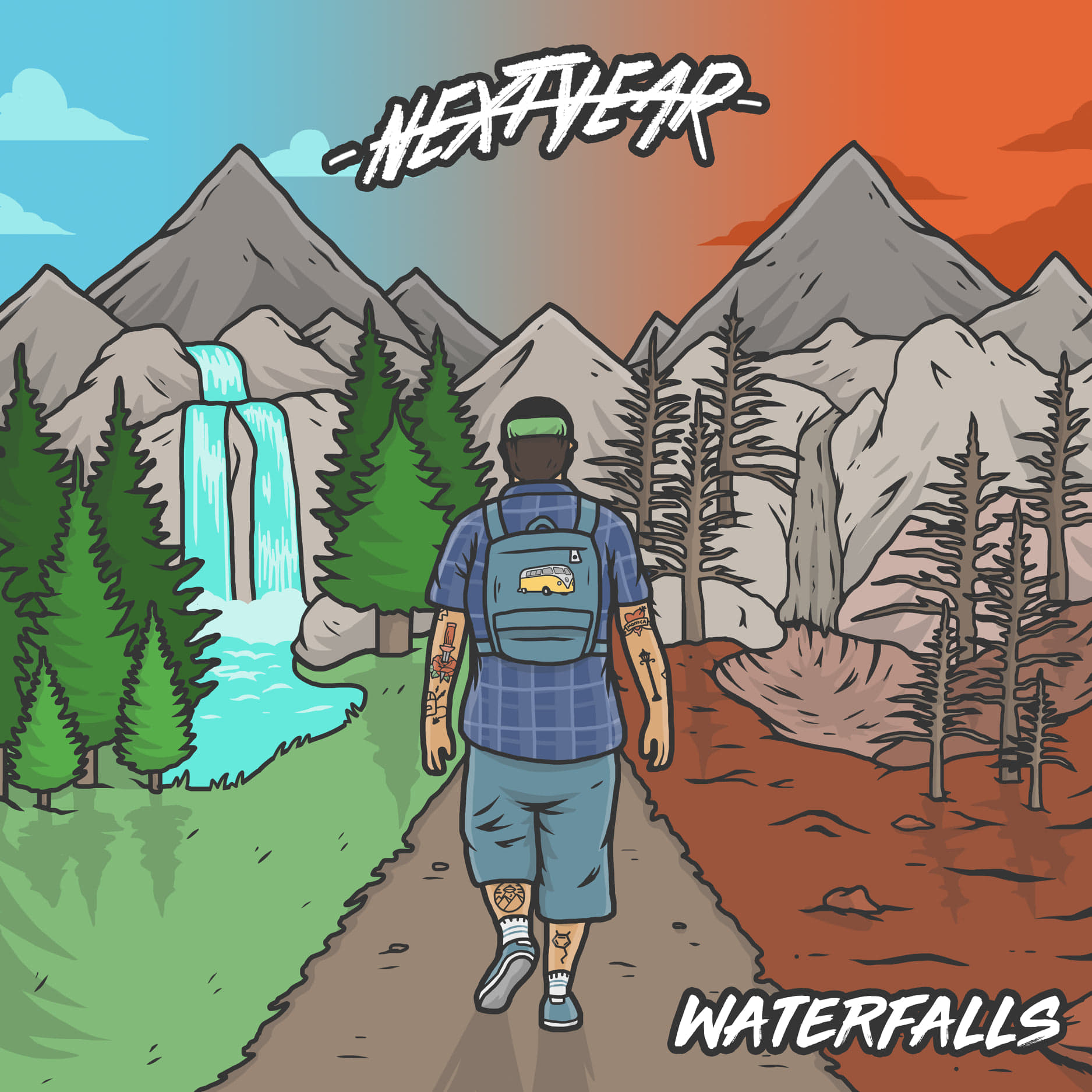 Five years ago I would have discarded any highly polished pop-punk release as a cynical cash grab. Over the intervening years as my music taste has expended and the zeitgeist of what’s commercially viable in rock music has changed, pop-punk of this variety has become more convincingly authentic. This is the world that Next Year find themselves in on the release of their second EP, Waterfalls.

The clean highly polished production on the guitars on Waterfalls is obvious from the moment that opening track Aliens & Pyramids kicks in. While it’s off putting to me to hear guitars robbed of all bite and rough edges, it’s a sound and production style that’s popular with a lot of fans of pop-punk so it’s an understandable stylistic choice. Instrumentally, it’s got some excellent lead guitar melodies, and solid rhythm guitar riffing. The drums are also solid, though not particularly outstanding. The vocals are really where the album falls down, though. They’re very characterless, and don’t have a lot of force behind them. The melodies constructed for them aren’t interesting or hooky, and often reach into strain falsettos that don’t quite work, like on the chorus of the first track. The harmony vocals are too low in the mix to bring the richness they should to chorus, and often sound like they needed another take, as they’re often not quite in key. By the time I’d hit the end of fourth track Remember Me I was ready to pass this EP off to another reviewer who might enjoy it more, or just bin it entirely. Then something remarkable happened.

A huge, stompy metallic riff came swinging in out of nowhere. Not really a song in itself, more just a jam, but one with grit and bite to it that had been lacking from the previous songs. It gave me a second wind to get through the rest of the EP. And thank the stars it did. The following song, Marquette, has more grit behind the vocals as it rattles along at high speed. It hits a solid chorus where the emotions on the vocals are finally noticeable, sounding yearning and passionate. It breaks into a slow more peaceful section focusing on layered vocals, that are pulled off well, though still with some of the earlier issues with harmonies. It’s a great song, that- if re-recorded for a future full length- could become an anthem for Next Year’s fans. The final track Dopamine doesn’t quite hit the same heights but is still a stand out song on the EP, with its mid paced alt-rock riffing and excellent harmonies on the chorus. These two tracks save the EP from feeling quite limp and give reasons for listeners to return.

Next Year have released a mixed bag of an EP, but the riff at the end of Remember Me and the final two tracks really show the potential of this young band. If they have the opportunity to keep writing and improving their material, they may well become the UK’s shining hope for pop-punk. If you’re a big fan of this sort of thing Waterfalls is worth picking up, but if you tend to only enjoy the best of the best from this genre give this a pass and wait for the next release.

Highlights: Marquette, Dopamine, that riff at the end of Remember Me

Waterfalls is out on 31st May 2019 and can be purchased here.

You can find Next Year on: