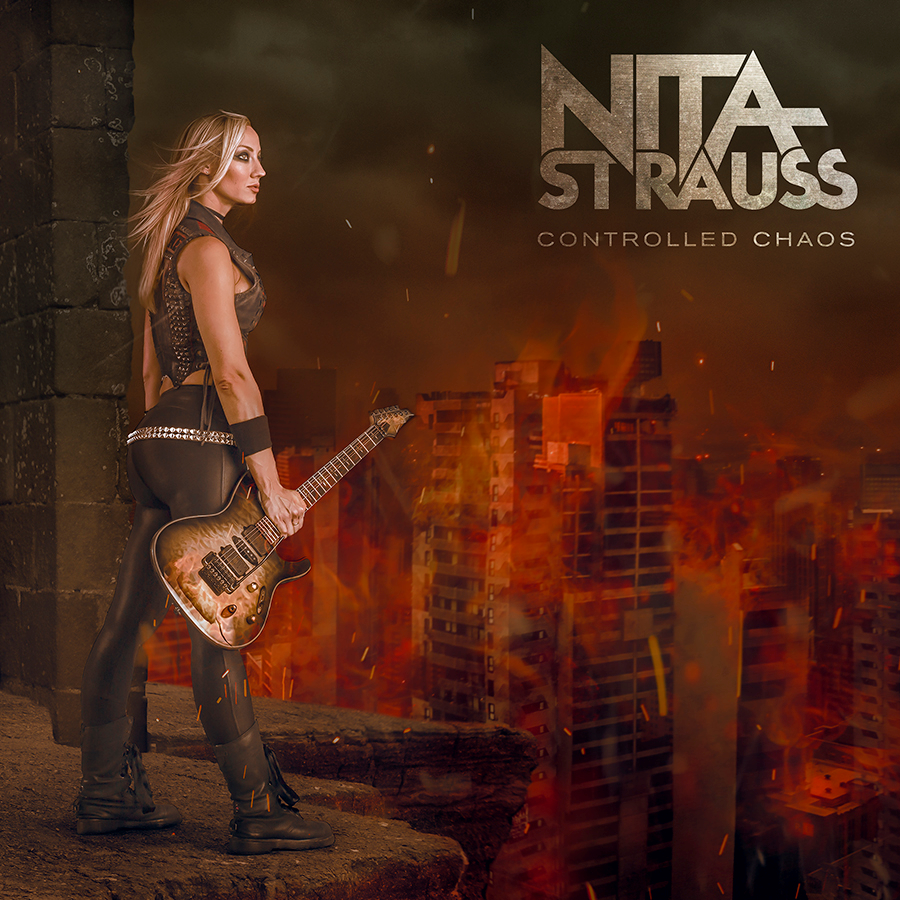 Nita Strauss is somewhat of an oddity in the music world. She is one of the most sought-after tutors for guitar clinics worldwide; she has toured the globe with acts such as The Iron Maidens and (more recently) Alice Cooper; she is the first female player to have a signature model with renowned guitar manufacturer Ibanez; she opened Wrestlemania 2018 alongside Lzzy Hale… This by no means an exhaustive list of her achievements. The oddity is that she has done all of this before releasing a single album under her own name or band. But all that has changed with the release of Controlled Chaos. This debut has been a long time coming, and the number of people eager to hear it is evident from the Kickstarter campaign used to fund its production: a campaign that exceeded it’s target eight times over. So, no pressure!

When considering instrumental guitar music, many people’s minds will still be drawn to (in the rock world at least) the likes of Steve Vai, Joe Satriani and Yngwie Malmsteen. Strauss banks on familiarity with such players during opening track Alegria, which has Malmsteen written all over the speedy arpeggios that dominate the chorus. It’s unfortunate that it is the chorus that lets this song down. It sounds more like a guitar practice exercise than a piece of music. The 80s metal influence doesn’t really appear again other than on the Disney-esque ballad Here With You, where Strauss restrains her tendency to tear up the fretboard for a slower and more emotional approach, with the guitar following the same melodies you could imagine a singer using if there were any vocals.

It is the more modern influences that shine throughout the remainder of the album. The harmonised riffs and rapidfire drumming of Our Most Desperate Hour emulate Waking the Fallen era Avenged Sevenfold, then heads back to a classic 80s melodic chorus before managing to cram a metalcore style breakdown in the middle. Marianna Trench has elements of Lamb of God in the tight riffing. The Quest combines neoclassical melodic shifts with djent/metalcore style backing riffs, and Lion Among Wolves adds extreme metal tremolo picking and blast beats to an already crowded mixing pot of styles. When Strauss isn’t shredding her way through these tracks there is Hope Grows and The Show Must Go On for those after something a little less intense. The former combines tinkling piano with acoustic guitar to make a fitting tribute to European power ballads, whereas the latter brings some additional orchestration to the album by utilising a string section to harmonise with Strauss’s guitar playing. There is one drawback to every track: the drumming. While yes, the drums keep the rhythm and help drive the songs and the riffs forward, the production of them sounds too mechanical, too clinical. There is something robotic about them, and the kick drum is a tad too dominant on many of the songs. It’s not enough to be a distraction, but it is noticable.

Nita Strauss has made an album that brings instrumental metal guitar playing into the 21st century. It will easily appeal to listeners from both sides of the musical fence: the metal fan who usually has no interest in instrumental music, but also the instrumental fan who likes modern metal but doesn’t listen to it much because the vocals are ‘just shouting’. One thing all the great guitar players have in common is that their sound and their playing is easily identifiable as them. I don’t think Strauss has quite found that unique touch yet as you often find yourself thinking ‘that sounds like <insert band/guitarist name here>’.  That doesn’t make this debut any less enjoyable, or Strauss’s playing any less impressive. Her technical ability and an ear for a strong melody are undeniable (plus she is a born performer), and she could easily stand shoulder to shoulder with any modern metal guitarist you care to mention. The challenge for album number two will be to add that little bit extra to make it unique and a little less like said other guitarists, but this a minor point. Ultimately, this is a highly diverse and well executed debut that sets the foundations for Nita Strauss’s career in writing music: the one area of guitar playing she has left to dominate.

Highlights: Our Most Desperate Hour, The Quest and The Show Must Go On.

Controlled Chaos is out now via Sumerian Records and can be purchased here.