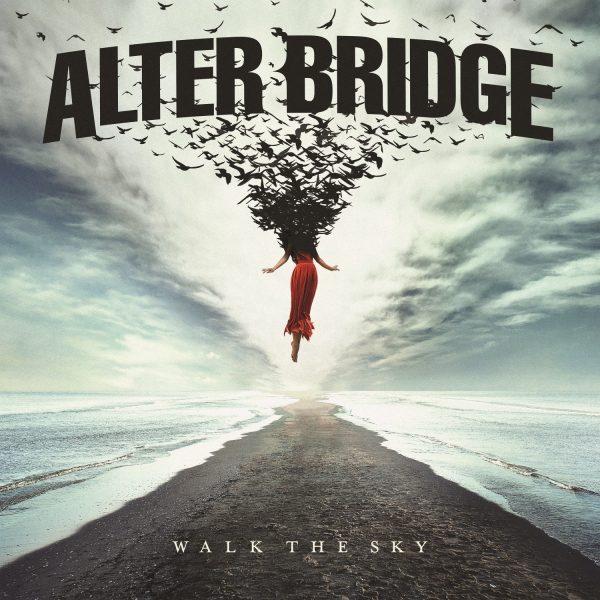 For fifteen years now, Alter Bridge have been masterfully bridging the gap between hard rock and heavy metal. Of the five albums they have made so far, at least three (Blackbird, ABIII and Fortress) are classics of the modern genre, combining technical prowess with arena shaking riffs and soaring melodies. If that wasn’t enough, singer/guitarist Myles Kennedy produced one of the best albums of 2018 with is debut solo album, Year of the Tiger, and guitarist Mark Tremonti released a close contender with his fourth solo album, A Dying Machine (plus an accompanying novel). What with Kennedy’s other commitments to some guitarist called Slash, it’s almost a miracle that they had time between them to get a new Alter Bridge album written at all.

Due to this hectic schedule, Walk The Sky, is the first Alter Bridge album where the two guitarists wrote their ideas separately and close to completion before they even sat in a room together. No one other than the band themselves can say for certain whether this had an adverse effect on the writing process, but after a couple of listens this is clearly one of the most straightforward records Alter Bridge have ever written, at least structurally. Every track has a nice regular riff-verse-pre chorus-chorus structure and there is little in the way of extended instrumentals.

This is not necessarily a bad thing. The band have been focusing their creative efforts elsewhere this time around. As the marketing team have put it, they are ‘pushing sonic boundaries’ and, while I reckon said boundaries haven’t really moved in the grand scheme of things, Walk The Sky definitely covers new territory for Alter Bridge. The most notable new addition is the sprinkling of John Carpenter style electronics over the record. We are introduced to this straight away on opening track “One Life” (the only ‘intro’ style track the band have ever written) where droning guitar lines underlay some soft crooning from Kennedy. Elsewhere, “Pay No Mind”, balances electronic melodies against guitar chords to great effect. The pre-chorus upsets the flow of the song but the chorus itself is bound to go down well live. The real highlight for the live show will be the uplifting “Godspeed”. Written about the passing of a life-long friend of Tremontis, it is a celebration of the positive effect of that person rather than mourning what could have been. The opening keyboard section sounds more like Chvrches than Alter Bridge, but then those huge guitar chords hit and after that it’s a textbook example of why Alter Bridge are masters of the rock anthem.

Title track “Walking On The Sky” also makes good use of sound experimentation, combining acoustic backing guitar with an effects laden lead guitar line. Add in the ever-reliable rhythm section of Brian Marshall (bass) and Scott Phillips (drums) and you get a full yet ambient sound. Unlike other tracks, the electronic parts aren’t just forgotten about half-way through either: the way they are added to the underlying guitar part during the chorus adds an unsettling edge and creates a dark atmosphere that harks back to Blackbird. Album closer, “Dying Light” has a similar vibe, with a lead guitar line that adds dissonant bending of notes, creating an atmosphere that feels like a mournful ending to a chapter. The chorus brings the hopeful sound you now expect from the tracks, with lyrics that speak of beginning anew after the light has faded.

Elsewhere on the record it’s near enough business as usual, albeit with less emphasis on chordal work and more on straight forward riffing, with mixed results. For lead single, “Wouldn’t You Rather”, the riff hits you like a thunderclap: crushingly heavy and perfectly in sync with a thick rhythm section. The downside is that it makes later track “Take The Crown” less effective as the main riff uses an almost identical rhythmic pattern. More déjà vu than excitement. My frustration grew with tracks like “Indoctrination” and “Forever Falling”, where the main musical idea/riff never seems to fulfil it’s potential, either being followed by a lack lustre chorus or change in direction that messes up the flow. “Forever Falling” in particular is guilty of this, with the aggressive and thrashy riff completely at odds with the rest of the song (one that features the now token lead vocal performance from Tremonti, who is rapidly becoming as good a vocalist as he is a guitarist). Fortunately, the perfect remedy is provided by “Clear Horizons”, a song that becomes more than the sum of its parts, with one of the albums best riffs and a stop-start chorus that brilliantly balances a heavy edge against the melody.

Alter Bridge are well known for turning dark subject matter into a hopeful and uplifting sound. Walk The Sky is no exception. Myles Kennedy is vocal about his belief in living for the moment and not letting anxieties, past or future, ruin your enjoyment of today. Lyrically, this makes for some interesting moments. On the one hand you have the genuinely inspiring likes of “Wouldn’t You Rather” and “Godspeed”, whereas on the other is the cheesy and naïve “Tear Us Apart”. Alter Bridge are not a political band, and that is absolutely fine, but while their use of vague and nonspecific lyrics might be engaging and inspiring for personal struggles, the few tracks that try to address issues of a larger scale do not really do them justice.

I realise that I have spent the majority of this review focusing on what I perceive to be the negatives of Walk The Sky. However, none of the tracks on Walk The Sky are objectively bad. It is almost a fact of life that Alter Bridge just do not write bad songs. Yet, there is a missing element to much of the release that prevents it from rising to the lofty heights of Blackbird, ABIII or Fortress. Frustrating is the best word I could use, as there are moments of genius and genuine innovation throughout, but several of the songs just don’t seem to gel, and my favourite bits are parts of songs rather than whole songs (“Godspeed” and “Clear Horizon” are the exception). I can’t help but think that bringing the band members together so late in the writing process, and after such a busy schedule, may have had a detrimental effect. Ultimately, this is still a solid and enjoyable album that sounds unlike anyone else in the rock world. Yet it sounds similar enough to other Alter Bridge, and Tremonti, albums that you can’t help but draw comparisons. This places Walk The Sky firmly in the ‘good’ part of their discography rather than the ‘amazing’. For new listeners it will be a good entry point, but for long term fans this is Alter Bridge maintaining their position at the peak of modern rock rather than rising to even greater heights.

Highlights: “Wouldn’t You Rather”, “Godspeed” and “Clear Horizon”

Walk The Sky is released on October 18th via Napalm Records and can be purchased here.

You can find tickets for Walk The Sky Tour 2019 (with Shinedown and Sevendust) here.