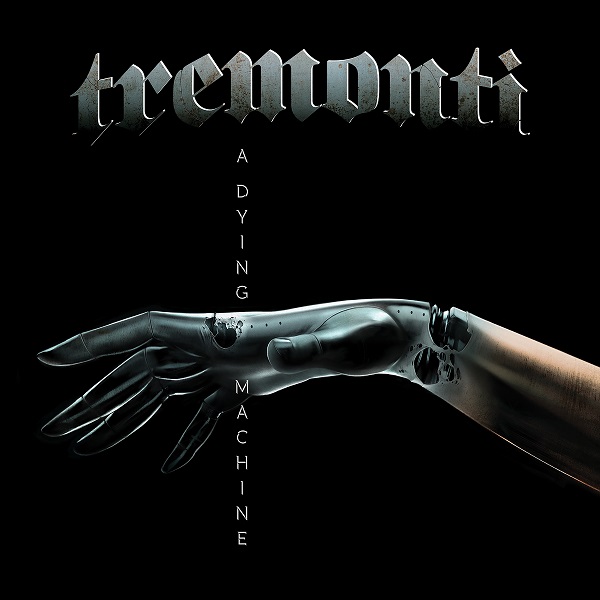 Mark Tremonti, for any who are unaware, is one of the most creative, ingenious and inspiring guitar players in modern metal (yes, I am a fan). Having decided that the creative outlet of his current band, Alter Bridge, was not enough, he started his solo side project, Tremonti, and launched their debut full length back in 2012. Six years later sees the release of album number four, A Dying Machine: the first concept album to be written by the legendary guitarist. The album is also set to be accompanied by a novel, co-authored by Tremonti himself alongside sci-fi/fantasy author John Shirley (Borderlands: The Fallen, Bioshock: Rapture). Unfortunately, the novel is, at the time of writing, unfinished, although is hopefully to be completed in time for the album release on the 8th of June. Set at the turn of the next century, the story is described by the band as ‘an emotionally charged narrative, spanning obsession, unrequited love, and destruction’. In an interview with Billboard, Tremonti revealed further details of the story, describing a war between humans and artificial humanoids called ‘vessels’ (further details can be found in the full interview). Intrigued at this new direction, it was with great excitement, and a certain amount of trepidation, that I clicked play…

If, upon hearing the term ‘concept album’, anyone was hoping for a complex and musically intimate beginning then they are in for a disappointment. Album opener, Bringer of War, starts with a brief military-esq snare drum driven introduction before going straight for the jugular with a fast-paced riff that wouldn’t sound out of place on a Motӧrhead album. Powerful vocals, tight guitar playing, and a hook laden chorus are present and correct, all tied together by the powerhouse drumming of Garrett Whitlock. From The Sky follows in much the same vein. I would normally accuse a chorus made up of simply ‘woah oh’ to be lazy song writing, but given the quality of lyric writing on offer throughout the album I will let them have this one. Title track, A Dying Machine, is the first track to sound like it was consciously written around a narrative: the opening section is an intense and aggressive address from the human perspective, whereas the second (or pre-chorus) section has a much gentler and remorseful sound, with the lyrics now being sung as if by the ‘vessel’ protagonist. While the sense of an overarching story/concept is quite clear in the title track, it is less so in others. Bringer of War, A Dying Machine, Trust and Desolation all identify with a theme, whereas tracks like Throw Them To The Lions and Take You With Me have a less obvious connection. This is quite a safe approach from Tremonti, as it means that there is a story there for those who are inclined to look for it, but for a casual listener there is nothing lost in just listening to random tracks as the mood strikes.

From a musical perspective, A Dying Machine does little to deviate from what fans will expect of a Tremonti album. There are mosh pit ready behemoths in Throw Them To The Lions and The Day When Legions Burned; The First The Last forms the obligatory ballad; Make It Hurt has a riff that will set the hands of guitarists everywhere twitching, before launching into yet another massive chorus. That is not to say that Tremonti has tried nothing new here. A particular highlight is Trust, a rare moment where the bass guitar takes dominance and provides a rhythmic driving force at the fore, with the beautiful harmonic guitar line forming the back drop. It is just a shame that the chorus doesn’t live up to the rest of the song. Tremonti’s ability to create original and creative chord progressions is once again shown on As Silence Becomes Me: a haunting track with a deeply saddening chorus that almost made me feel guilty on behalf of the humans who had abandoned the protagonist. The First The Last has already been mentioned as the ballad on the album and, while a moving and memorable track, Dust remains the Tremonti ballad to beat. Some fans won’t approve of it leaning towards pop music territory at times (that four-on-the-floor first chorus for instance) but I’m sure their anger will be contained to the comments section of Youtube. Towards the end of the album there is a swift turn into old-school pop-punk territory with Take You With Me: a hugely infectious and upbeat track that also happens to feature one of the best vocal performances on the album (although A Dying Machine is a close contender). In order to avoid being too biased I will also mention that there are two tracks that are fairly forgettable (I won’t say which because it is ultimately just down to personal taste). This does not include closing track, Found: four minutes of muted and distant instrumental work that, while fitting for rolling over the end credits of a cinematic piece, does little to enhance the album. The only reason I listened to the whole thing the first time through was because I expected something more to happen afterwards.

A couple of minor lapses aside, Mark Tremonti has once again proved that he is one of the greatest musicians in the modern metal scene. Like all great albums, A Dying Machine rewards the listener for repeated listens, whether that is listening to the full package or just picking out individual songs. I could discuss how listening from start to finish takes you on a journey with peaks and troughs, discord and harmony, all forming a musical backdrop to a tale of love and loss, hate and reconciliation, but that would take up a whole separate article. Each listener will take away something different, whether that is from full immersion in the narrative or simply from rocking out to some of the best work modern metal has to offer.  Far from a dying machine, Tremonti seems to be a constantly evolving and improving one. Long may he continue.

Highlights: Make It Hurt, The Day When Legions Burned, As Silence Becomes Me and Take You With Me.

A Dying Machine is released on 8th June 2018 via Napalm Records and can be pre-ordered here.