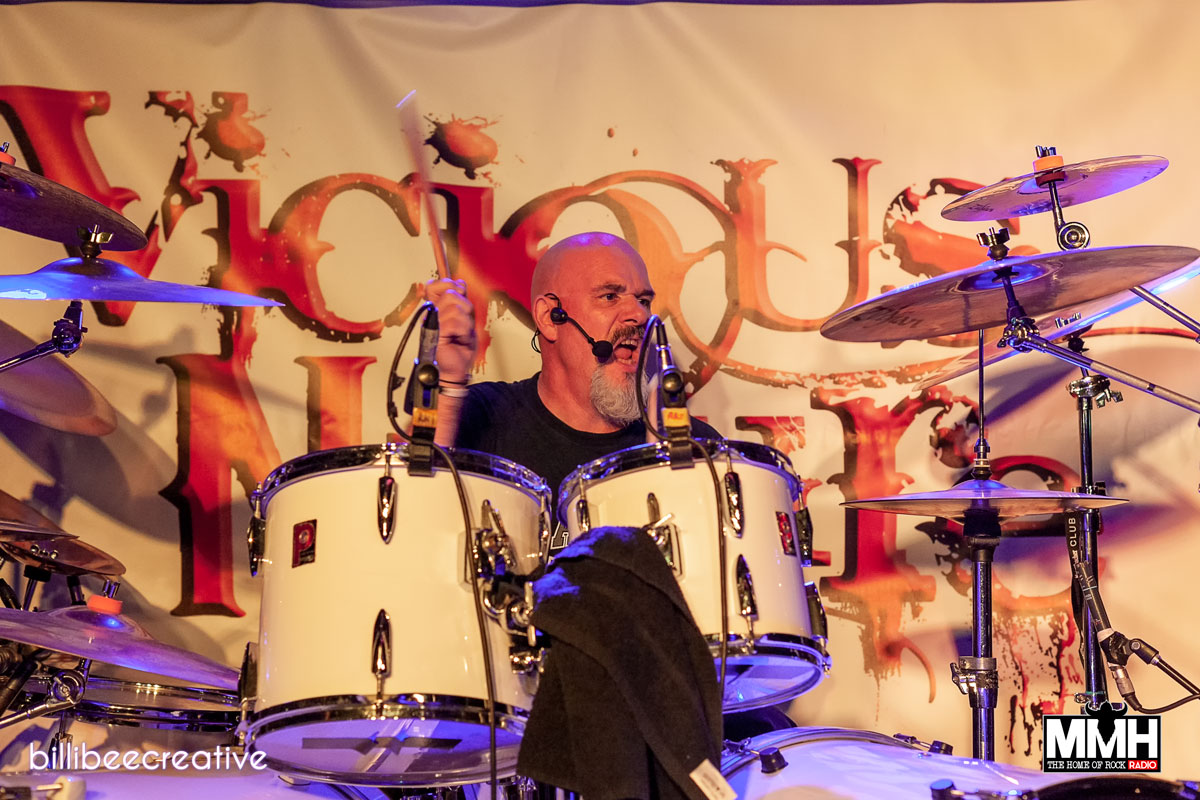 Another Saturday night in the SLADE ROOMS Wolverhampton, there’s 4 bands on the bill that have a mixture of styles, which makes it interesting. With a few more gigs in close proximity tonight and a wedding clash, I am also curious as to how many will attend.

REQUIEM are a young, 4 man strong band from the West Midlands, who tonight feature the local talent of Blade Edwards on bass. Given half an hour, they play 3 off their ‘Desolated’ EP that came out in 2018. Covering RATM’s ‘Killing In The Name’ is no mean feat and they do it justice. ‘Old Town Road’ is another cover they play around with, before ‘Demons’ and ‘Desolated’ end the set. Often seen playing locally in the Birmingham area, they are ‘up and coming’ no mistake.

WINTER STORM are launching their third album ‘Relapse In Time’ tonight, it’s a concept and follows on from the second album ‘Within The Frozen Design’. A story about a character lost in another dimension, it’s a clever idea and after listening to it, the tale becomes quite clear in your mind, like reading a good novel, but with the tracks providing the message. Getting this across on stage however, without playing all the album, clearly needs Hannah Fieldhouse, on vocals and lead guitar, to explain the meaning behind it all. After an introduction, ‘Dreamscape’ is the first to be played, a heavy melodic song off the new album, it has stirring vocals and Hannah delivers it quite perfectly. ‘Dark Awakening’ and ‘Wasted Feelings’ are older compositions, while ‘Colliding Skies’ in-between them, continues the newer story. More from ‘Relapse In Time’ keep the flow, ‘Astral World’ is a real game changer, powerful keyboards and a stronger force. Without drummer Nathan Hutchins tonight, keyboard player John Bradley steps in to provide the sticks, while the keys are on backing tracks. ’Thought Machine’ is much darker and you sense impending doom. Screaming guitars, with Wayne Taylor on 7 string rhythm and menacing bass lines from Andrew Hawkins. It all descends into the more restrained ‘Ever Dark’ this too has some quite magical edges. There aren’t many in the Slade Rooms tonight to grasp this sedate performance, but I hope those that did witness it, will buy the albums. Finishing on another older song ‘Firedancer’ from the debut ‘Serenity In Darkness’, it was a potent set.

As the name implies MisSabbath is a female fronted Ozzy/Black Sabbath tribute band, obviously not one for the purists. With keyboard player Janson Sissons up front, you expect later Ozzy/Sabbath material rather than songs, from the early Osbourne fronted Sabbath albums. However, they perform a wide range and give us their own adaptation, which is brave and oozes confidence. Wendy Shone has a striking appearance, a very stylish gothic look and has horns in her hair to complete the effect. ‘Bark At The Moon’ and ‘Perry Mason’ are my introduction to MisSabbath, I like the almost operatic approach to ’Sweetleaf’ and Mick Hammonds, in some pretty cool sunglasses, does offer us simple, a type of Geezer muted bass. A combination of ‘War Pigs’ and ‘Paranoid’ see the crowd singing along. One of my favourite Sabbath tracks, that guitarist Brian Copp handles effortlessly ‘Fairies Wear Boots’, is given quite an elaborate twist. I was a little disappointed with ’Symptom Of The Universe’ it can’t be the easiest to sing and Wendy did struggle to complete it in her classical style.‘Mr Crowley’ is the last up and that is dealt with better, I believe the room is in agreement on that one. Well, I did say there was a mixture in the styles tonight, how true.

So it’s time for the headliners VICIOUS NATURE, who are no strangers to the Slade Rooms. Ex Marshall Law vocalist Andy Pyke and guitarist Andrew Southwell formed the band in 2012, joining them on drums is Jon ‘JB’ Brown previously with NWOBHM stalwarts Cloven Hoof. Completing the lineup these days is bassist Declan ‘Paddy’ Parry, who was also in Marshall Law. Ok, well as anticipated, the turnout isn’t tremendous, however those of us who are here and there are quite a few, can savour watching VN without having to dodge heads and avoid those 2 pillars, that normally block your view in here!

From the debut EP ‘Fight For Your Life’ the title track is tackled without any remorse and ‘Dream Stealer’ carries the same brutal vocals from Andy P. Vicious Nature do live up to their name, as there’s no escaping the heavy bombardment of thrash, ’Dragging Us Under’ and ‘Bleeding All The Way’ see Andrew S, shred to his content. Probably one of the most unassuming axemen that I know, he manages to produce some unrelenting and sheer perfect solos. ‘Salvation’ from 2014 precedes a cluster off last years 6 track ‘VII’. It was well received with stacks of positive reviews, in fact I didn’t see one negative word. ’System of Disorder’ and Mr Pyke is at ease with the crowd, loads of banter and we are now used to our names being called out on occasion. ‘Rise Up’ also from ‘VII’ is a crowd pleaser, then we have the new ‘Agent Of Evil’ it’s in the same Vicious vein but has an almighty riff, clearer lyrics than usual and another nicely executed guitar solo. Guess it will be on the next recording, as the band take to the studio soon and have hinted of a new release early next year. ‘When The Devil Calls’ and ‘Twisted Psychotic’ end the hour long set. Another faultless performance from Vicious Nature.

See more of Robs photos from the show HERE

Also thank you to Brett Hall and LiveWire for organising this show.