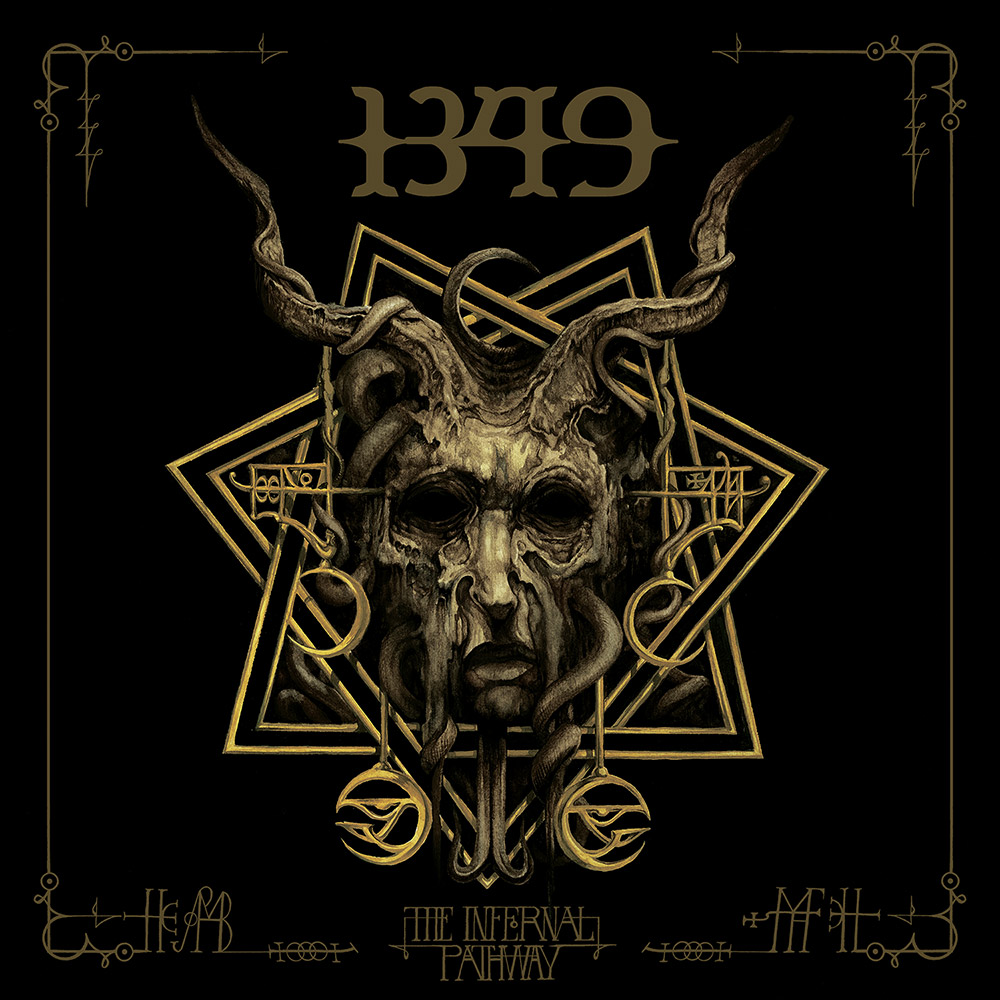 1349 is striking back, armed with a new album – The Infernal Pathway. The band was formed from the ashes of Alvheim in 1997 by Ravn, Tjalve, Balfori and Seidemann. The black metal madmen from Oslo took their name from the year the Black Death reached Norway. After 2 self-issued demos and changes amongs its members, the band still remained unknown, despite its old school sound and great potential. 2000 was a real game-change for these very talented, tenaciuos and absolutely evil musicians, as this year Kjetil-Vidar Haraldstad, -known better as Frost, Satyricon’s drummer- joined 1349. Soon after, they released their first EP and drew attention from black metal fans. In 2003 they released Liberation, a debut album which quickly became absolutely iconic and one of the most important albums of the genre. 1349’s roll didn’t end there. Over the next 2 years they spoilt their fans with more glorious albums, Beyond the Apocalypse and Hellfire. 1349’s raw and quite a technical sound mixed with Ravn’s unmistakable vocal and Frost’s insane drumming became widely recognised. The band tours a lot and its live performances opens with a fire breathing show performed by Frost and Archaon, creating a mesmerising atmosphere for the audience. 1349’s fourth, but first highly experimental, album Revelations of the Black Flame was a big surprise and unfortunately, for most of the band’s fans, also a big disappointment. Dark ambient compositions weren’t really for their taste. Luckily, musicians returned to their raw black metal roots releasing in 2010 with Demonoir and continued their best in next album Massive Cauldron of Chaos released in 2014. After a long break from recording, 1349 announced its long waited seventh album to be released in 2019.

The Infernal Pathway promises a pure evil fury. The album’s cover was created by art and music master Jordan Barlow, famous for his uniquely dark and dramaticly disturbing arts. The album opens with Abyssos Antithesis, quickly revealing the main theme of the whole album – black metal rage mixed well with technical ferocious chaos. Hell yeah! The next track, Through Eyes of Stone, seems a bit more melodic than previous one, yet remains very savage. Personally, lyric-wise, it’s my favourite from The Infernal Pathway. The story of existing for ages, dead but seeing everything ‘through eyes of stone’ in the form of a statue absolutely got me. The third track, Tunnel of Set VIII, is a short continuation of Tunnel of Set collection. The Infernal Pathway has three of these being little breaks from the fury, marking a new chapter and acting as great intros to next tracks. Enter Cold Void Dreaming and Towers upon Towers seethe with anger, hard riffs, mad drums and raving vocals. They definitely are the heaviest tracks of the album. Both show 1349 at its best – insane masters of chaos, shaping it to their own thirst and will. Trust me, it won’t stop there, right after Tunnel of Set IX, total madness continues on Deeper Still and Striding the Chasm, serving raw sonic aggression.

Dødskamp has already gained a title of ‘the black metal track of the year’. No surprise here at all. The track is a 1349’s interpretation of famous Edvard Munch’s painting ‘Dødskamp’ (Death Struggle). Munch’s art is full of pain, drama and misery reflecting his internal strugle and suffering. Very often, he chose death as a main theme of his paintings. ‘Dødskamp’ is one of many where death is in the spotlight. It shows soon-to-be mourners gathered to say their goodbyes to a man expiring in front of their very eyes. Peculiar to Munch’s style, this piece of art is absolutely bleak, grim and causes anxiety and discomfort, yet irresistably tempts the viewer to discover its depths. In 1349’s interpretation, Dødskamp delivers the most extreme anxiety possible with its comforting acceptance of death and faith: ‘Emptiness, Blessed Death’. If Munch was still alive, he would agree that this track reflects well the sinister meaning of the painting: ‘I can no longer see where chaos ends and I begin. It is cold, it is dark and there is no return. With my back towards the wall, I stare into the abyss’. The more I listened to Dødskamp, the more I can understand why it was choosen the most black metal track of the year. There’s nothing describing and promoting Norway better than Edvard Munch’s art and black metal.

The Infernal Pathway closes with Tunnel of Set X and Stand tall in Fire. Kept in grim, but melodic style from opening tracks with Ravn’s rough vocals and shuddering guitar solos are a perfect summation of the whole album leaving listeners with a desire for more…

Overall, The Infernal Pathway is a very good album that I genuinely enjoyed listening to. It continues ideas style and progression from Massive Cauldron of Chaos. Tracks are full of the promised madness, darkness and chaos but remain well structured and thought-out. In my opinion, they miss a bit of severity from first albums, on the other hand the album nicely compromises 1349’s need of exploring and moving its sound forward. It will be well received by many fans of the band and black metal, but for those searching for a raw black metal insanity it may be a bit disappointing.

The Infernal Pathway is available from 18th October 2019 via Season of Mist and can be purchased here.