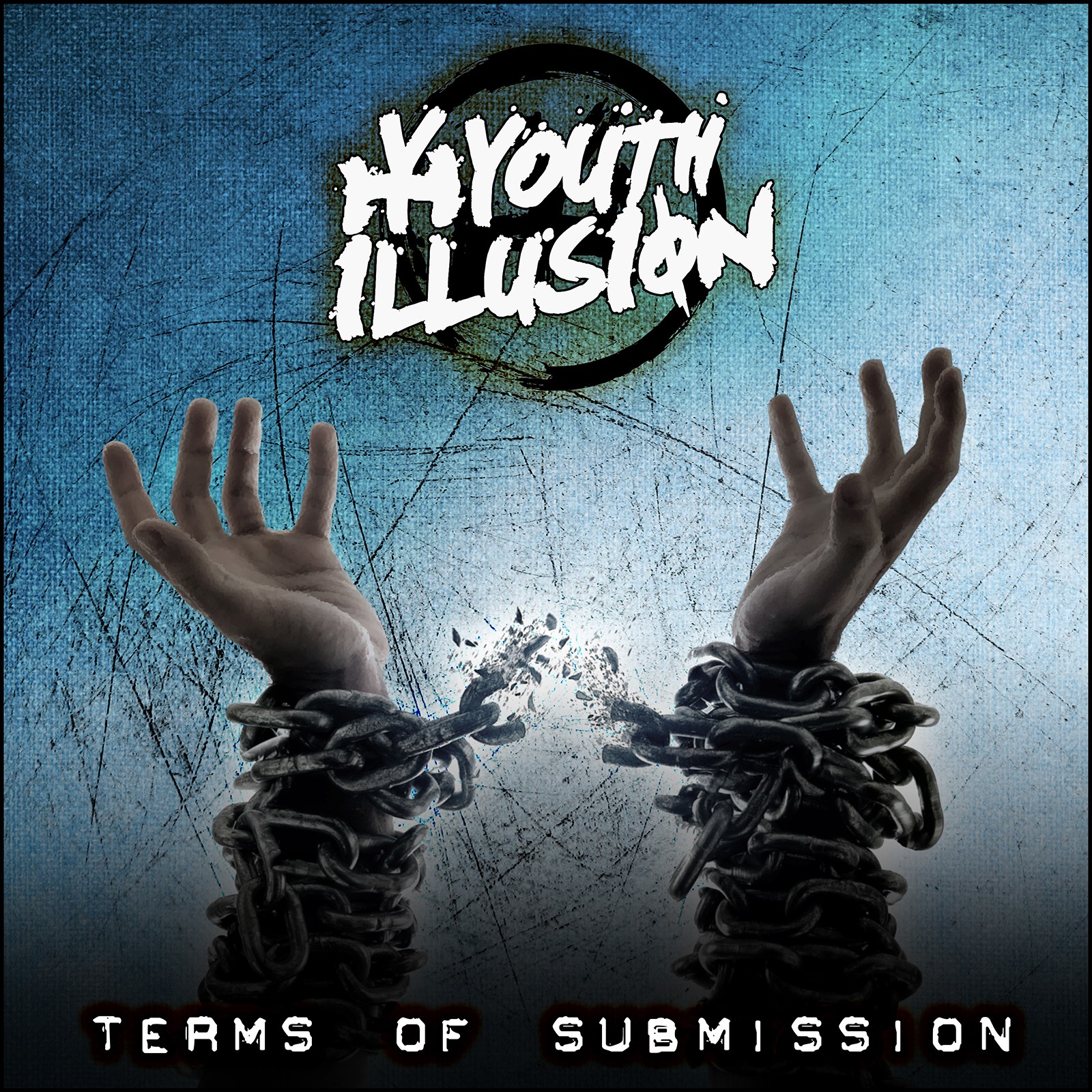 New boys Youth Illusion formed initially in May 2018, but they’ve wasted no time in getting stuck into the recording side of music, by sealing a record deal with Essex Recording Studios within 3 months. Perhaps even more impressive, they’ve managed to sort out the mastering of the new EP at none other than the Abbey Road Studios. While they’re based in London, Youth Illusion consists of members from around the world, such as the the US, the UK, Italy and South Africa.

Terms of Submission begins with the rock-hard Better Off. Straight in with thrashy guitars and pounding drums, the band show that they’re not afraid to bring hard rock and metal influences to the table. With a kickass instrumental breakdown that most metal bands would admire, Better Off makes for a great track to introduce new listeners to the band. At first listen, the vocals reminded me of Pete Loeffler of Chevelle. From their array of genres and sounds used, I wouldn’t be surprised if Youth Illusion were influenced by a whole range of bands. Cover Up and Die is next in the track listing, and similarly to Better Off, it kicks in with catchy riffs and a driving groove. What impressed me more so with this one was how crisp and sleek the production sounded. For the intro, there is just enough in the mix to keep it hard and heavy, without sounding too low-end and without any unnecessary reverb. For the rest of the song, I think if the cymbals were a bit louder in the mix, it wouldn’t be far off perfect. Ultimately, it’s that extra 5% that Cover Up and Die lacks. I admit I might be being picky here, but this really isn’t far off a great song. I like how clear and prominent the vocals sound in the mix, if anything they sound a bit too prominent in comparison to the other instruments. A bit of extra attack from the guitars in the chorus with the cymbals turned up a bit more, and I think this is a stand-out song from a band that’s just starting out.

If you’re someone who values something more groovy instead of a straight down the line song, Enemy would be your go-to song from the EP. Despite the fact it’s fairly straightforward, Enemy packs enough groove and variation to keep it interesting throughout. A much more rhythmic song, the bass and drums lock together well and provide the foundations to allow the track to groove in the way it does. Rebellion is a track that is completely different to the rest that have preceded it. Although it still has those catchy riffs, it’s a very pop-punk influenced track. This is reflected well by the bright sound of the guitars (similar to Neck Deep), and also the slightly cheesy lyrics in the chorus. Rebellion might not necessarily match up to the other songs, and you can tell that this is a band still trying to find their sound or musical direction. In my opinion, I don’t think it’s the right song to close out Terms of Submission, however as it is an EP, it doesn’t matter too much. In addition, I believe that releasing this EP was a smart decision, as I don’t think they’re ready to make a full-length album just yet. Once Youth Illusion have built a solid following and found their identity as a band, I’m sure they’ll be well equipped to make their debut album.

Having listened to the EP, one thing I’ve noticed with this band is that you can’t really nail them down to one genre. However, this isn’t a bad thing, as many bands that don’t necessarily ‘fit’ into one genre have made their success through establishing their own sound. This is something that I think Youth Illusion are setting out to do. Whilst they’ve amalgamated styles such as punk, pop punk and rock, they’ve also started to create their own sound. Personally, I tend to describe a certain song by saying that it sounds like: *insert band name here*, rather than a genre, purely because I want to accurately convey what I hear. I’m sure that others do that too. For instance, AC/DC and Led Zeppelin are both rock bands, but they have completely different sounds. You can only get so much of an idea from stating genres.

I think Youth Illusion are doing exactly the right thing with this EP. They’re trying to create that signature sound, so that they can brand the band off of that, rather than letting people speculate over what genre they are. People might label bands like slipknot as ‘metal’ or ‘nu-metal’, but ultimately, Slipknot are entirely unique. No one else truly sounds like they do. Even if one of their songs gets played that you’ve never heard before, you know it’s Slipknot. Youth Illusion aren’t afraid to aim high. I’m sure that they’ll be hoping one day in the future, people will say ‘yeah I just listened to this new band, they kinda sound a bit like Youth Illusion.’ To summarise them, I’d say they’re an upcoming alt-rock band who are open to new ideas. In conclusion, I think Terms of Submission is a good effort from a new band that have got potential.

Highlights: Better Off, Cover Up and Die

Terms of Submission is out now and can be purchased here.