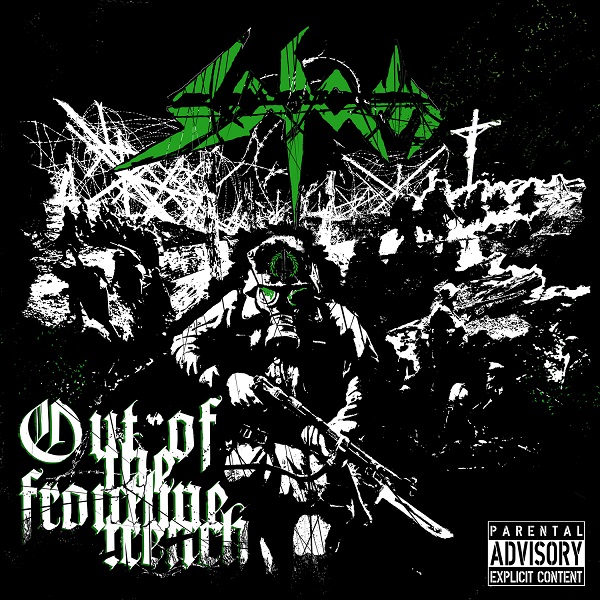 It was about a year ago now that I was putting pen to paper whilst musing over Sodom’s EP Partisan, which was to be a taster for a forthcoming album. Fast forward twelve months, and I find myself in the same position, writing a review for another EP intended to preview the same album. The release of the new record is now seemingly within sight, and much like Partisan, Out of the Frontline Trench is a more than adequate appetiser that indicates that a full length from this Sodom line up can only be a good thing.

This EP is structured similarly to Partisan, with a handful of new studio tracks preceding a live performance of a classic Sodom cut. This time round, the Teutonic thrashers have also thrown in a re-recording of the much loved “Agent Orange” track from their 1989 album of the same name. Reworking an old song is always a dangerous proposition, but I find that people are more forgiving when it’s done as a bonus or as part of a stopgap release, so its inclusion here is worth the risk. If anything, it affords us the opportunity to indulge in a direct comparison between old and new material, and it’s pleasing to say they sit alongside each other quite nicely. The intensity of the new stuff doesn’t quite match up, showing that there’s an aggression and bloodlust that can only really be captured with youthful vigour, but the riffing and dynamics are much the same. As far as re-recordings go, it’s pretty good, and has a fuller sound than the original, but lacks the cold, clinical steeliness that made the song downright brutal back in the ‘80s.

Of the three new tracks, one is destined for inclusion on the next record (“Genesis 19”), with the other two exclusive to this EP. There’s a slow build to “Genesis 19” before it sets off into a mid-paced surge; not spectacular by any means, but a decent slice of thrash wrapped in an old school production style. “Down on Your Knees” is a step up, with some catchy guitar work and vocal lines that should go over very well live. The drumming from Stefan Hüskens leaves a little to be desired however, with some sloppy playing and fills proving distracting. Sometimes being off kilter can benefit the music, but here I find it disruptive (though not the extent that the song greatly suffers, thankfully). The title track then delves into Sodom’s proto black metal past, with neck snapping riffs, blistering tremolo patterns and mesmerising leads anchored by a solid rhythmic pulse. Of all the songs I’ve heard from this line up, this is definitely the strongest.

A live rendition of “Bombenhagel” rounds things off, culled from the same 2018 set as “Tired & Red” from the Partisan EP. And much like “Tired & Red” before, it’s a respectable rendition that lacks the potency and precision of the studio effort. I said at the time that there was room for improvement on the live front from this version of the band, and this only reinforces my belief. In spite of its faults though, it’s still a cracking track, largely due to its anthemic nature and memorable guitar work, so it’s still well worth a few spins, warts and all.

Out of the Frontline Trench is an ideal companion piece to last year’s Partisan. If the new songs here are anything to go by, then things look very promising for Sodom going forward. I’m still not entirely sold on Hüskens’ drumming, but Angelripper sounds vicious, and the guitar duo pack plenty of killer riffs. It’s felt like a fairly long wait, but on this evidence there’s no doubt that thrash fans will be wanting to keep an eye out for the new album when it arrives.

Highlights: “Down on Your Knees”, “Out of the Frontline Trench”

Out of the Frontline Trench is available from November 22nd via Steamhammer, and can be purchased here.