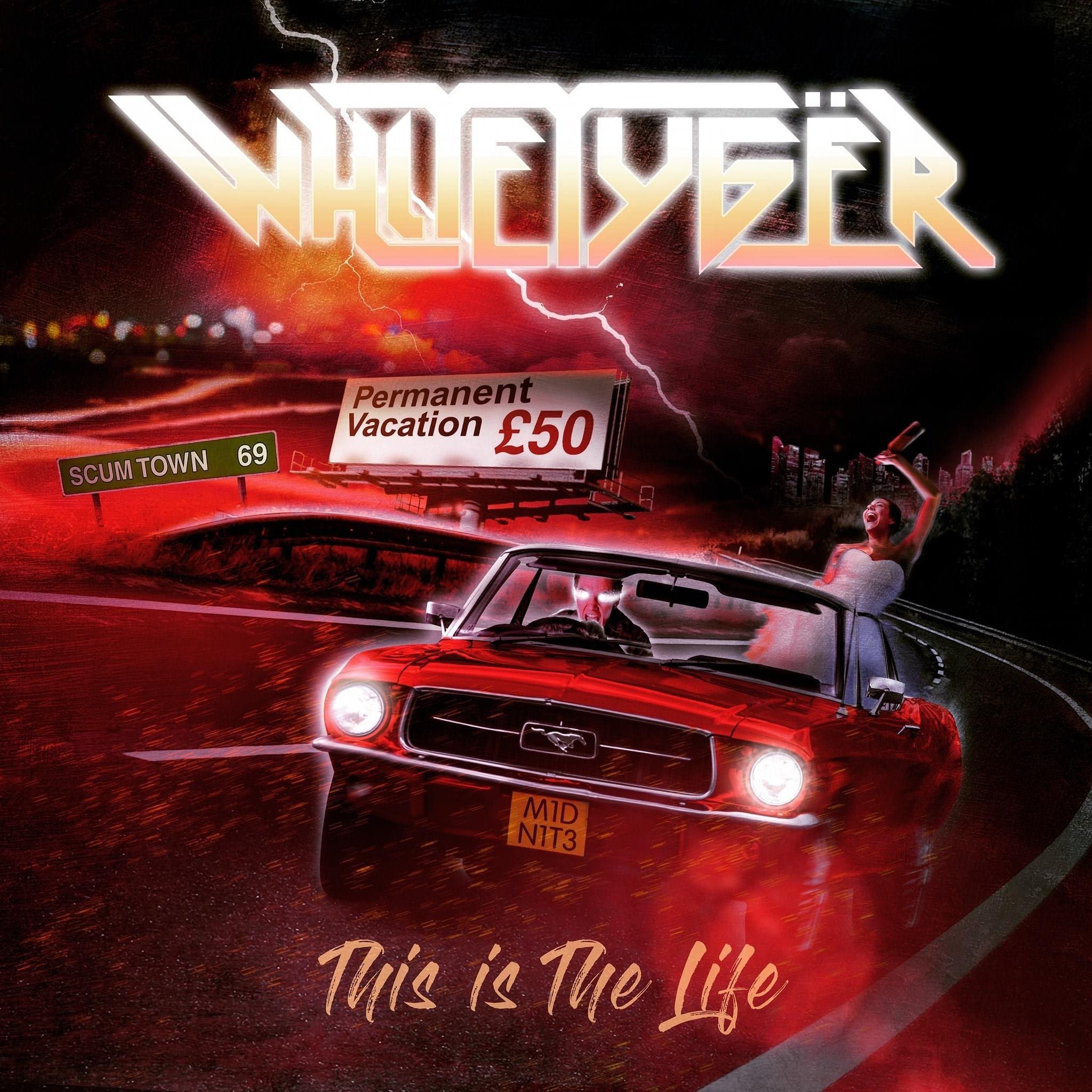 This album heralds a turn in direction for White Tygër. The guys have been popular as a live covers band for a number of years now and recently they have also been throwing in a couple of original numbers. Well, the time has come, the debut album of their own hand crafted songs is here and there must be a multitude of fans eagerly waiting for the release. Having watched them play a few times, I have always thought they had enough about them to do this and now it’s a reality. Let me take you through the album, track by track.

The title may sound familiar to ‘Aerosmith fans’, but this is as far from a cover version that you can get. The White Tygër song ‘Permanent Vacation’ is a fret meandering thriller with some extreme guitar manoeuvres from Chris Hingley. The vocals of Nip ‘Tyger’ Turner slip in and the lyrics are only interrupted for more unrelenting shredding. Brilliant opener, that twisting guitar is crushingly superb. ‘Heartbreak Hotel’ ( No not that one) slams on the pedals with decisive stomping. More melodic and rising vocals, while the sticks of Jack Ryland Smith ( Ex Gin Annie ) and Ste Timmins on bass, cement the foundations. Thudding and inventive as it shifts into a range of gears. The same can be said of ‘Runaway Bride’, as Nip hardly stops for breath, the speed is incredible and he’s backed up with a band that are of a dangerously high standard. ‘Midnight Lovers’ is a track with layers of pure caressing tones. It rolls evenly and offers a warm and easygoing chorus. A ballad of significance ‘Forever And Always’ has all the character of those anthems by ‘Tyketto’ or ‘FM’ with enough guitar interaction to boost the levels, again it’s quite a powerful statement. I love the title ’Skum Town’, this one stops and starts with a slower cruise, there are more impacting blows from Jack and Chris comes in at times to swoop with demonic strings.

The title song ‘This Is The Life’ is lighter and sways with an increase in melody. A glorious amount words that you can participate in and the chorus is tremendously up-lifting. A return to breakneck pace as ‘Speed Demon’ starts, maybe not the strongest track on the album, but it allows Chris to break loose again and there’s a change of rhythm that demonstrates this bands capability to throw anything at you. Speaking of which ‘No Fucks Given’ has to be the tune. The riff is simple but wow, it has you in its grip from the beginning, the swagger and attitude is exceptional. Nip gets into his stride with chest beating vocals and the result is one of the best new songs I’ve heard, for a long time.

This has been a long time coming, about 7 years I believe, but well worth the wait. Honestly, I wish they had been able to do this years ago, as they would be up there with some of the festival headliners by now. I don’t think they know, just how good they are. But this album is extraordinary and it’s packed with nine songs, that will leave you shell shocked. ’This Is The Life’ and this is the time for White Tygër, with an album that will get them noticed, for sure.

‘A band that are of a dangerously high standard’

The launch show is on July 3rd at the River Rooms in Stourbridge, West Midlands, but being a Sunday the fun starts at 4pm. Support comes from young rock band ‘Jailer’ and there’s plenty of activities planned, besides the live show.