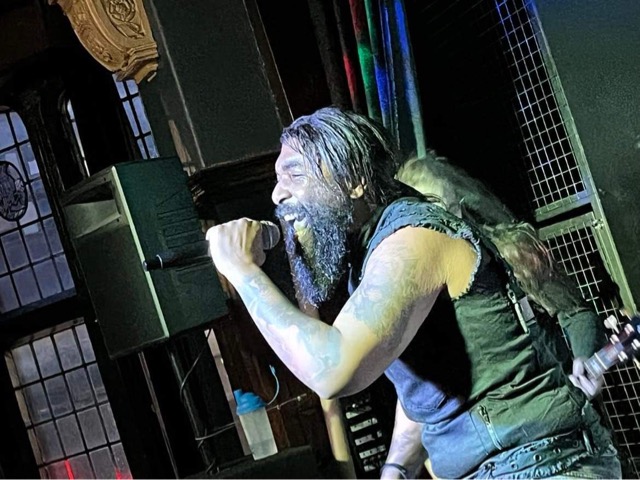 My first opportunity to see Matt Gore with Vicious Nature tonight. The new frontman has been working hard with the band over the last few months, so it will be interesting to see how he shapes up. Support is from Blade Edwards, from ‘Buzzsaw Radio’ who is moonlighting tonight with an acoustic set.

BLADE EDWARDS  and his guitar appear on the Giffard Stage to a round of applause. The local, well liked entertainer has forgotten to write out his set list, but the way Blade spins his songs out, putting them on paper is pretty irrelevant. He would only change his mind and play something different anyway. ‘Fire And Brimstone’ is his first number and as we settle down to enjoy his humorous repertoire, more folk emerge into the room. The ‘Ramshackle Glory’ song ‘Your Heart Is A Muscle (The Size Of Your Fist) ‘ is a decent cover and one that fits Blade’s style perfectly. After deciding on his next choice, the tale of how ‘Frank Turner Broke My Watch’, he tells us of his love for the ‘The Wildhearts’ and the song he has written called ‘Wild At Heart’. A song that makes reference to many a ‘Ginger’ classic and I love the way he handled it, reminded me of how ‘The City Kids’ render their stuff. There’s an American comic songwriter called ‘John Craigie’ and Blade covers his song ‘I Wrote Mr Tamborine Man’ with similar tongue in cheek amusement. He does end with the ‘Buzzsaw Radio’ song ’Superhero’ which is, of course, a softer blend of the punk rock track. A very engaging set Mr Edwards and a fine warm up for the main band.

VICIOUS NATURE  are returning to the Giffard with new vocalist Matt Gore who is also with ‘The Mighty Wraith’, for those who are wondering where they’ve heard that name before. After over a year and 55 auditions, Mr Gore was enlisted to replace the legendary Andy Pyke. The amount of time and unsuccessful candidates just proves how difficult it was to find someone who fitted that space and having had the privilege of being at a rehearsal, I knew beforehand that Matt was approaching the task with full commitment. I couldn’t make the warm-up show the other week in Rugeley, so having an invite tonight, I was full of anticipation ahead of the performance.

A dozen or so numbers on the set list this evening and after a lengthy introduction, that built up the tension, ‘Fight For Your Life’ exploded into being. The Giff’ is filling up now, after these initial chords have drifted downstairs to the bar. The heavy riff of ‘Dream Stealer’ is always a favourite and Matt puts his stamp on it with immense confidence. ‘Welcome Vicious family’ he screams and thanks Blade for the support, getting us clapping in agreement. Taking a gasp of air he announces the next song, which is of course ‘Breathless’. I like the comfortable vibe and the way he holds our attention, there’s no way we’re getting distracted. As they get to ’The Silence That Kills’ and ‘Salvation’ it’s apparent that Matt fits in superbly. His powerful yet distinct and unwavering vocals, alongside Andy Southwell’s unrelenting riffs, are phenomenal. More intensity as the notes of ‘Dragging Us Under’ vibrate the floorboards, Declan ‘Paddy’ Parry never ceases to amaze me, automatically fitting in those lowly bass lines with precision. Really good atmosphere in here and as I walk over to the bar for a different angle, I notice the sound engineer has got it spot on too. ’System Of Disorder’ is time for some audience participation and we are encouraged by Matt to join on the ‘Whoa,O’whoa’ chorus. I like how he points to the ‘Fuck The System’ T shirts hanging on the merch’ desk, as he sings those lyrics, even the rest of the band smile at that, a sign of the slightly more, relaxed approach.

Andy’s guitar wizardry is evident again as he lunges into ‘Bleeding All The Way’ and then his sublime intro from the ‘VII’ EP of 2019, ‘(The Calm) Before The Storm’. This is the lead into ‘Rise Up’ where Jon ‘J.B’ Brown’s sticks herald another torrent of surging metal. The rampant undertaking of ‘When The Devil Calls’ and ‘Twisted Psychotic’ mingles dark and sinister vocals with another lashing of riffs. The last of the night is a new one entitled ‘Moment Of Impact’ and what a riff. It warms with Matt’s vocals and then swells into an adhering rhythm. A more intricate guitar solo and then pounding from all directions, wow what an incredible piece of work.

I enjoyed watching Vicious Nature again and I was enthralled with Matt Gore’s capability. I’ve seen him in his other guises and a few of his band mates from The Mighty Wraith were even in the room cheering him on tonight. He has brought new life to V.N, there’s a different feel to the band, they’re less rigid, more open and you know what, they look more content. (Taking nothing away from past members of course). Jon told me they have a lot more new material and I suppose more new tracks will be interwoven at future shows. If ‘Moment Of Impact’ is anything to go by, we are in for some awesome gigs. There are also plans for a new EP.

‘Matt fits in superbly. His powerful, yet distinct and unwavering vocals, alongside Andy Southwell’s unrelenting riffs, are phenomenal’

More info on dates and new releases on the Vicious Nature FACEBOOK  page.

Thanks to Brett Hall & Andrew Southwell for the Press Invite.