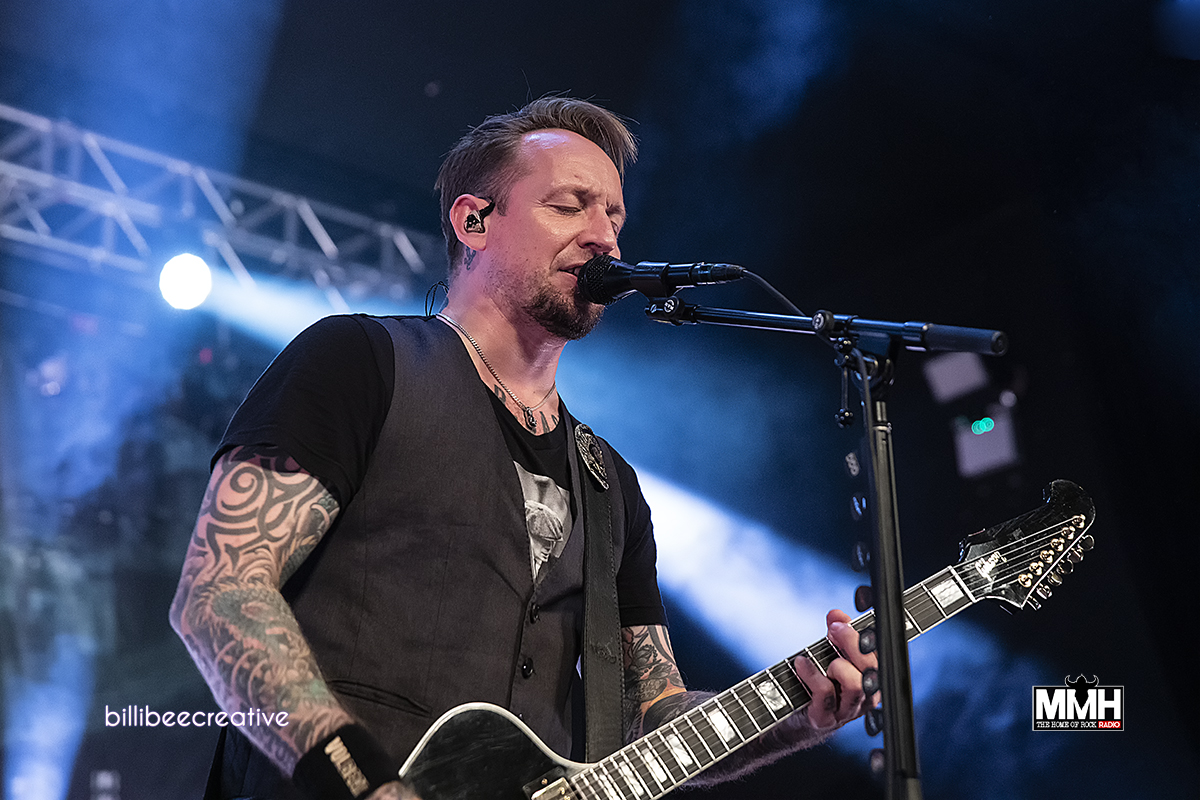 Two days have passed since Volbeat cancelled their Bristol gig due to illness, causing fans in the Midlands to bite their fingernails in rabid anticipation. Thankfully Volbeat prove to make one hell of a recovery as any signs of disappointed faces after the show are undetectable across the rammed O2 Academy.

But such a moment is a long way off for now. Before Volbeat incite pure and utter euphoria, support bands Danko Jones and Baroness manage to effectively build up the audience to that precise and special moment.

Danko Jones are not a band that inspires in-depth analysis of their music. In fact, it would be quite impossible to do so as the rock trio from Canada deliver an energetic set layered with comedic lyrics and unabashed shining grins. It’s fairly straight forward yet it’s a fantastic display of guitar driven hard rock and its ability to encourage dancing, headbanging and several moments of screech like singing from fans that’s capable of a few ears bleeding. In short, it’s a performance that simply makes you feel good. The sight of bassist John Calabrese bouncing up and down like an ecstatic cocker spaniel is worthy of a smile at the very least. Yet this joy is clearly reciprocated as many members of the audience explode with joy to songs such as First Date and My Little RNR. It’s a brilliant set with the cherry on the cake being Danko and his humorous charm announcing that fans who go to gigs on a Monday are the most bad ass of them all.

Half an hour or so later and the atmosphere changes entirely. Baroness not only deliver a set that couldn’t be further from the opener but its also one that permeates intricate musicianship and hauntingly beautiful ambience. With darkened and mysterious lighting Baroness quickly embrace the stage and reveal their hybrid brand of heavy progressive sludge metal with frequent psychedelic twists. The lighting proves to be an essential feature of their set with each colour denoting the colour of the album titles that songs hail from.  March to the Sea is a stunning performance, its emotive lyrics depicting drug abuse with the perfect blend of a heavy and melodic sonic backdrop. In a similar vein, Chlorine and Wine is a masterpiece, close to seven minutes long featuring superb melodies from frontman John Baizley paired perfectly with the chemistry and talent of guitarist Gina Gleason. Gleason is incredible to watch, not only for her varied guitar skills but the sheer passion and attitude she channels into every song, her near constant flurry of headbanging making her the coolest of the cool. However, Baroness’ performance proves to divide the crowd throughout.  Whilst some practically go into the realm of exuberant oblivion, other (admittedly older) members of the audience are stubbornly glum with a face like a cat’s arse. Still, with a band so different to the headline act, its to be expected.

As Baroness conclude their set amidst sighs of sadness and relief, the audience eagerly await the appearance of Volbeat. The lights dim and a mash of Born to Raise Hell by Motorhead and Right-Hand Man by Nick Cave and the Bad Seeds provides the perfect intro tape. Volbeat emerge on stage to an erupting applause before immediately diving full force into Pelvis on Fire. One of the best songs on their latest album Rewind, Replay, Rebound, the first riff has barely been played and an almighty mosh pit is summoned. This is a constant feature of Volbeat’s set, even through gentler and slower songs such as Lola Montez. It’s a rather strange phenomenon to watch but an entertaining one at that. Another classic Volbeat formula of Johnny Cash and Elvis Presley on speed, Pelvis on Fire is the perfect opener, much better than Cheapside Sloggers on previous nights of the tour. Doc Holliday immediately follows from the fantastic album Outlaw Gentleman and Shady Ladies, its clear Western influences tying perfectly with Volbeat’s heavier side that gives a slight nod to Metallica. It’s hard to believe that the band had to postpone a gig several days ago, especially with frontman Michael Poulsen suffering throat complications. They’re truly back in form tonight, their playing as tight as ever and with the energy to match.

With a brief subtle homage to Johnny Cash through playing a segment of Ring of Fire, Poulsen transitions into the acoustic opening of Sad Mans Tongue. Its always amusing to see the heart throb appeal the frontman seems to have with older women in the audience with many leaning on the shoulders of their better halves to get a closer look. All this rapidly ends though when Sad Mans Tongue truly kicks into action, the pits quickly developing into frantically running around in circles and sweeping up any unsuspecting victims in their way.

After this stunning highlight, the band invite Danko Jones on stage to share vocal duties on Black Rose. Sporting a Sacred Reich shirt and a flat cap (an interesting combination) his vocals work fantastically with Poulsen and its great to see this track off Seal the Deal & Lets Boogie come to life.

Taking it down a notch and slowing things down, Poulsen makes a heart felt tribute to his father with the following performance of ballad When we Were Kids. This is followed by the boogie woogie-esque track Die to Live, again one of the better tracks off their latest album which often falls into cringe worthy commercialism. However, it has to be said that tracks chosen to be played live off this album are not only received well but are much more appealing in a live set up.

Yet the mentioned tracks above are essentially inferior to the following display of the Slayer inspired Slaytan paired with Dead but Rising. It’s a powerful and heavy example from Volbeat’s back catalogue and it’s highly impressive live.

There’s a brief interlude before the encore filled with audience members repeatedly shouting “Come to Download Festival!”, perhaps hoping that Andy Copping is there amongst them frantically taking notes and adding Volbeat to the 2020 line-up.

Volbeat return to the blistering sound of The Devils Bleeding Crowd. The mosh pit is becoming rather exhausted at this point but the dedicated few still persist with limply pushing each other and staggering in circles. This is followed by the refreshing addition to the UK setlist of Pool of Booza Booza before the staple climax of a Volbeat gig – Still Counting. Regardless of the amount of times people have seen Volbeat live, the isolated singing of the audience singing the first couple of lines is guaranteed to incite excited goose bumps every single time.

The band are simply on fire to the very last riff and beat, looking humbled at the sheer volume of the enthusiastic response from the crowd when they finish. This humble nature continues as Volbeat take time to throw out items such as a signed drum skin to the crowd, including those in the stalls. Perhaps the most frustrating moment however is seeing those poor souls in the stall clumsily loosing grip on a drum stick as it falls into the depths of the audience of piranhas below.

Tonight has reaffirmed the power and tenacity of the live Volbeat experience, a band that truly thrives when performing their distinct range of material to fans. Fans who are so fiercely dedicated and match the amount of passion that the band exhibit on stage. It’s a beautiful connection to not only watch but also to be a part of as Volbeat are a remarkable example of the thrill and inspiration that live music can inspire.

Even, admittedly, when they play tracks off Rewind, Replay, Rebound.

Photography by Lisa Billingham, check out her full set of images of Volbeat, Baroness and Danko Jones here