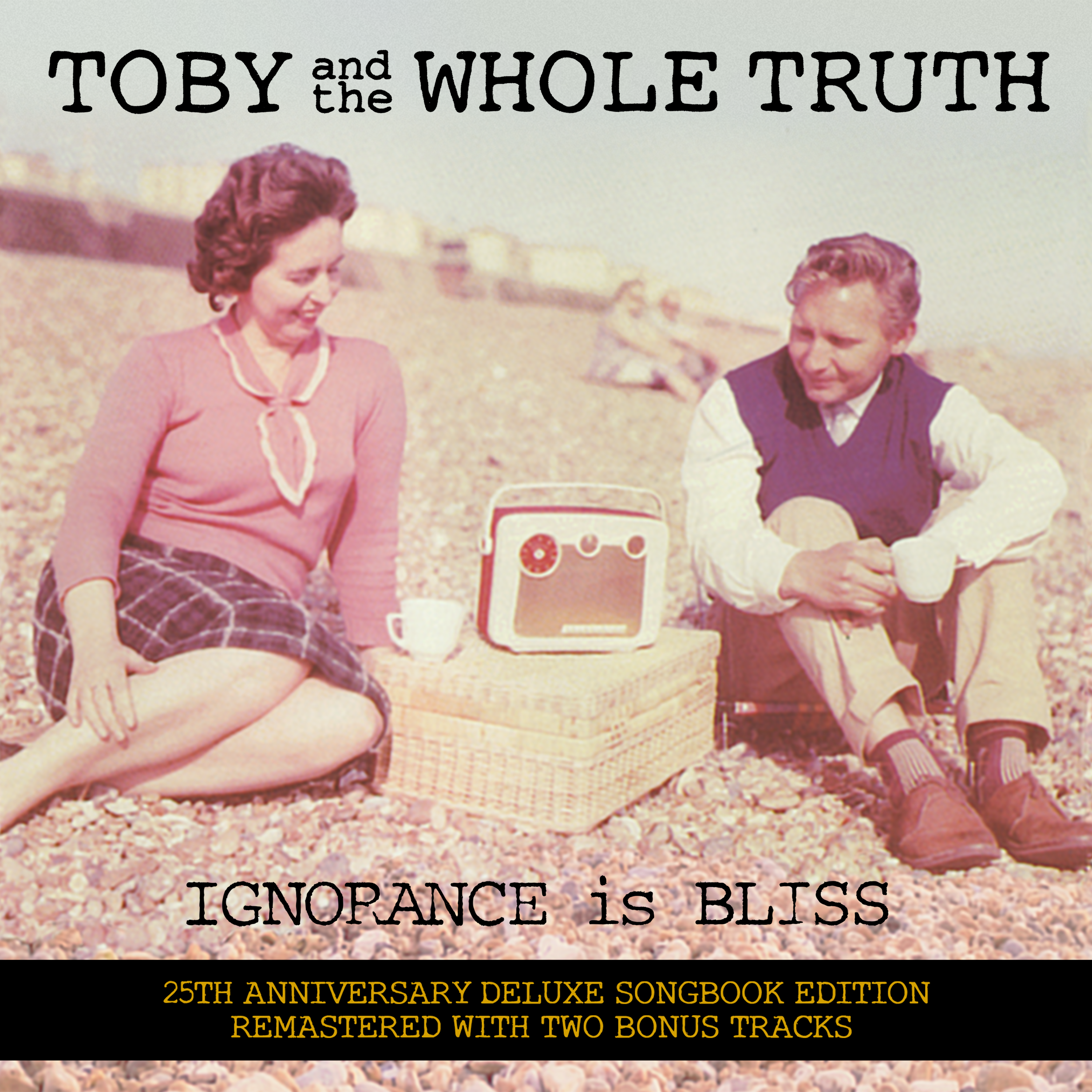 Toby Jepson found fame as the frontman of Little Angels, arguably one of the most successful British rock bands of their time. When the band split, Jepson continued to write and produce music and released his debut solo album in 1995 as Toby & The Whole Truth. That album was called ‘Ignorance Is Bliss’ and it has been remastered for re-release on its 25th anniversary with 2 brand new tracks.

With almost 40 years in the industry some might say Toby Jepson has a golden touch, not just as a performer himself- his latest venture Wayward Sons have been heaped with praise- but also as a writer. I missed the first coming of this album, so my first experience was of this version, which I then compared to the original. This is one of very few people I would say this of, but why the hell isn’t Mr Jepson acknowledged as a song writing genius? And not only that but he is a damn fine musician and vocalist too.

The album opener ‘Some People Are More Equal Than Others’ is a sludgy, bluesy number with soulful melodic vocals that are simply mesmerising. The track includes a superb guitar solo (as expected) and has a real modern and vibrant feel to kick off the album – a true ear worm and an immediate route direct to the inner workings of my aorta.

The moody and seductive bassline stands out on ‘Better Off Without Me’. A mellower track that still has depth; it’s compelling and just a little bit heart wrenching. The intensity continues with ‘Slipping Through Your Fingers’, which brings in some blistering guitar work. From here the album turns on its storytelling mode with the beautifully written ‘Haven’t Got The Strength’.

The fire returns with ‘The Wind Blows Hard’, which is a real stomper and contender for best track on the album. It has a little southern fire thrown in and is another brilliant involuntary ear worm taking root.

I was trying to climb out of a real funk – probably a familiar feeling to some readers after months cooped up– but ‘All Heal In Time’ did what very few songs can achieve: it pulled me out the other side. Anyone who has faced the black dog and stared him down will know what I mean. The gentler approach and inspiring lyrics just resonated with me.

There is a grungy, punkish attitude with a vitality that is difficult to emulate in ‘I Won’t Be With You’ while ‘Save Me From Myself’ is heartfelt and possibly autobiographical. I feel like Jepson has put heart and soul into this record, back then and again now. All the tracks soar high above the mediocrity that his peers often succumb to and this record is one to get lost in. ‘Out of Sight Out of Mind’ features some stunning fingerwork and the beat is beguiling, the vocals like nectar. The song rumbles along and you never want it to end. Stylish, classy and unforgettable.

‘Harder All The Time‘ has an Indie or Britpop feel in places and is a real grower which develops itself as a classic the more I hear it. This is my kind of drinking song and I’m afraid I burnt my chips I was so engrossed. ‘Open Your Mind’ is the last of the songs that featured on the original album in 1995. It’s upbeat and energetic and catchy as hell. Is that a slice of sleaze I feel there? It’s sexy- made for dancing and loving.

The first of the new tracks, ‘Get Your Feet On’, has that familiar soulfulness to the vocals and a 70s glam rock influence, while ‘Spiritually Bankrupt’ is a brilliantly evocative perspective on modern life, and quite appropriate today. Frank and sincere, this is a stunning story told by one of the most captivating lyricists I have come across. And it sounds amazing too.

This album shows no sign of being old or dated, it is not a replica nor an incomparable remake. It is a diverse and authentic mix of excellent music that, not only stands the test of time but, flouts all rhyme and reason and is just as brilliant now as it was on initial release. I could waffle on for hours about this album, but I won’t. Suffice to say you need to take a listen if you consider yourself a fan of hard rock, hair rock, glam, sleaze, and just about every other style of rock. If you are a Wayward Sons or Little Angels fan you will love this. If you haven’t heard anything by Mr Jepson before then you will love it. Buy it. It’s out 17th July.

Stand out tracks: The Wind Blows Hard, All Heal In Time, Spiritually Bankrupt

Find out more at https://tobyjepsonofficial.com/

Tracklist:
Some People Are More Equal Than Others
Better Off Without Me
Slipping Through Your Fingers
Haven’t Got The Strength
The Wind Blows Hard
All Heal In Time
I Won’t Be With You
Save Me From Myself
Out Of Sight, Out Of Mind
Harder All The Time
Open Your Mind
Get Your Feet On (new)
Spiritually Bankrupt (new)