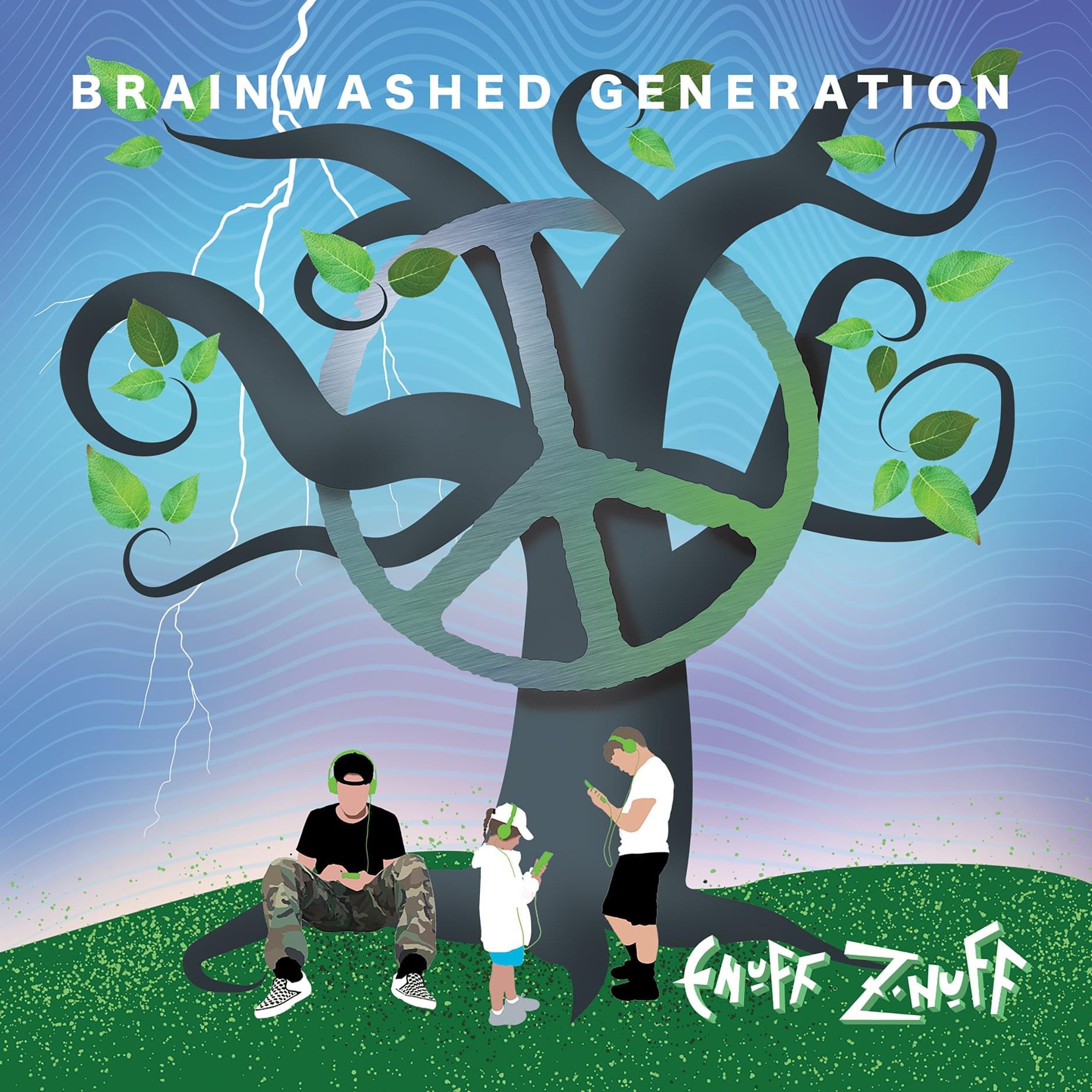 It’s fair to say Enuff Z’Nuff have a colourful history, numerous line up changes and all the ups and downs befitting a Rock and Roll band. These days Chip Z’Nuff takes on the lead vocals and bass guitar with original guitarist Alex Kane back on the grid. Along with Dan Hill on drums and Tory Stoffregen also on guitar, the present members have released ‘Brainwashed Generation’, being the 15th studio album by the band and a follow up to ‘Diamond Boy’ that came out in 2018. With a little help from their friends, many of the songs on this album, feature stars of immense magnitude and one or two surprises.

‘The Gospel’ according to Chip and company is a 39 second intro with a few chords summoning us to Church in a true bluesy gospel way, with piano from Joel Norman. Once seated, the first song, which was also out as a single ’Fatal Distraction’ is announced with chimes similar to that of a doorbell. It’s a step back to the fluffy, psychedelic sound of the Enuff Z’Nuff of old. Guitar from Steve Ramone and drums from Daxx Nielsen (Cheap Trick) give it some edge and altogether it’s a lovely harmony filled melody.

‘I Got My Money Where My Mouth Is’ features Ex member Tony Fennell ( Ultravox, Luxx, When in Rome II ) on guitar and you can make out his heavier style quite easily. There is a resounding riff behind the vocals that catches your attention and I like the way it all slows and then juggernauts with a trippy outro. ‘Help I’m In Hell’ is a little more of a sombre track, a darker side of the band presides. It still carries great harmonies, which see it break into a cool chorus towards the end as we fall into the mire. ‘Its All In Vain’ is a total turnaround, a glorious pop inspired rendition with Beatle like Whoo’s. So no shock that behind a Ringo replica kit sits Mr Mike Portnoy (Dream Theatre, Sons Of Apollo, Winery Dogs, to name just a few). ’Strangers In My Head’ is where Donnie Vie provides vocals and a guitar track, the ex founder member has moved on to establish a successful solo career, but this is masterful and the most heartfelt of songs to be included. Chaotic and mesmerising the song plummets into muddling voids and then rises again and again to complete a voyage of absolute pleasure.

‘Drugland Weekend’ has and I quote, ‘an inaudible lead guitar track from Ace Frehley’ (Kiss), although I think I could make it out. Again there are some heavier sides and the vocals are more persistent, it gets more messy as it drives home. Not the same story on ‘Broken Love’ as we float back to the flowing and gentleness of Chip’s vocals. Accompanied by cool guitar from Brian Ray and Steve Ramone, it’s a romantic walk in the sand. ‘Go..’ builds into another which Enuff Z’Nuff can be proud of, such a lovely chorus, it really does take you back to their earlier work. The last song ‘Winding Road’ is, to be honest a little ‘Zeppelin, Physical Graffiti’ in part, if you can imagine that. Although when you add the melody and charisma of the vocals, it does come into its own. Bit of a different way to end the album and makes for conversation.

After so many years and now 15 albums, it’s good to know that Enuff Z’Nuff can still produce songs of such worth and incorporate so many strings to their bow. Fans worldwide still adore their unique and original brand and so many ‘heads’ guesting on this one album is a credit to the band and confirms the fondness and high regard in which they are held.

‘So many ‘heads’ guesting on this one album is a credit to the band and confirms the fondness and high regard in which they are held.

3. I Got My Money Where My Mouth Is

6. Strangers In My Head

For more information on the band see below –