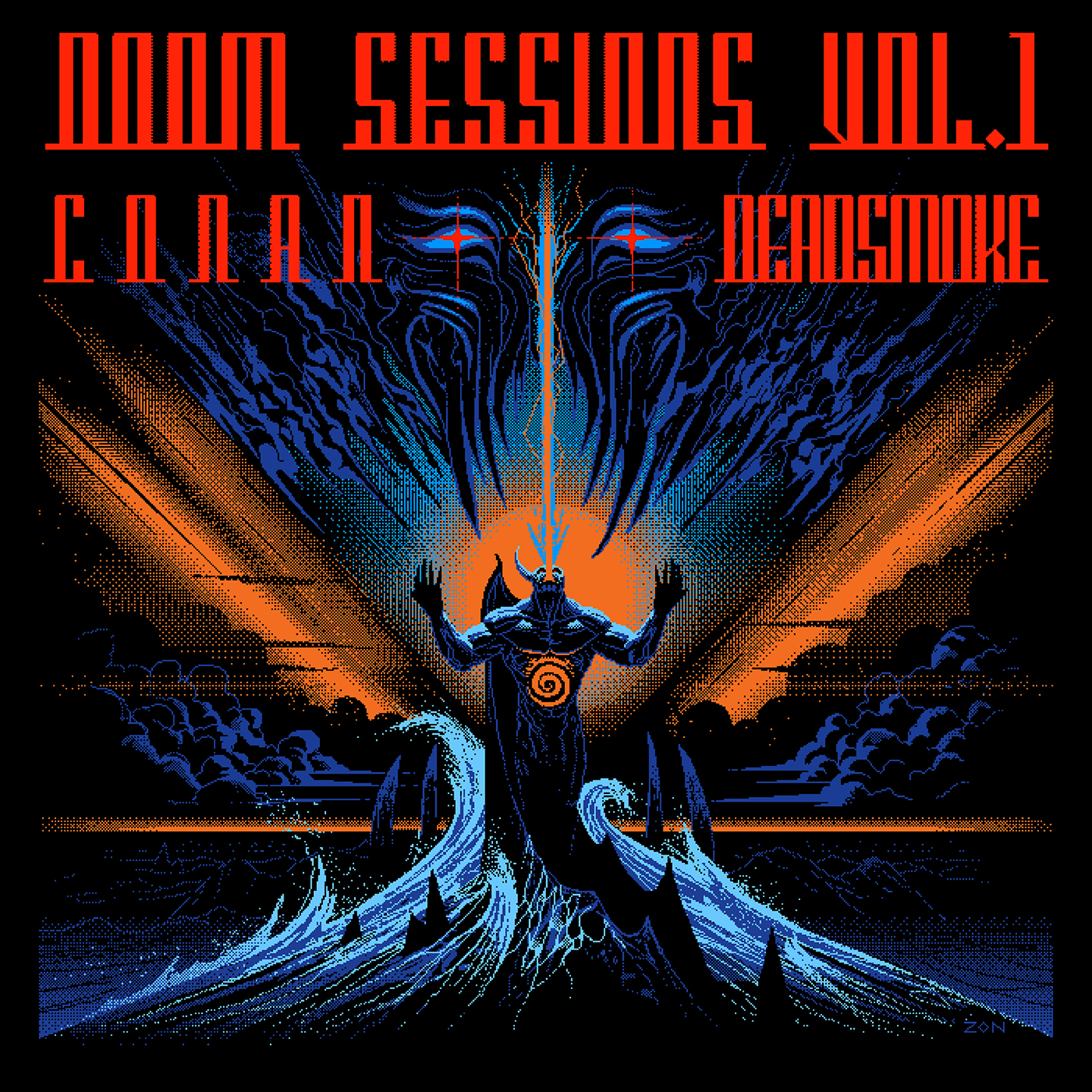 Heavy Psych Sounds, the Italian-based label home to Nick Oliveri, Black Rainbows, Alunah and Karma to Burn, are starting a new series of split albums titled ‘Doom Sessions’. With two bands on each release, one band per side, who better to include on the inaugural pressing than Conan and Deadsmoke? Conan, the Liverpudlian doom metal trio, have ascended to become one of the biggest names in the live circuit for all things low and slow. Deadsmoke, signed to Heavy Psych Sounds themselves, are lesser-known, but worth equal attention with their nightmarish atmosphere and crushing sound.

Conan’s ‘Beheaded’ makes up Side A – yes, the whole side, with it being seventeen (!) minutes long. Opening with a slow fade of pounding, monolithic drums, it’s almost a minute before the stringed instruments make their first appearance. After that, a wall of extremely dense, fuzzy guitars dominates the mix beneath Jon Davis’ apocalyptic vocal wail, his signature dissonance and atonality providing a unique and rewarding medium between clean singing and throat-shredding growls in the doom and sludge scene. Musically, it doesn’t progress much for its seventeen-minute length – not that it needs to. A sprawling epic that builds up brick by brick, Conan’s strength is their simplicity that barely goes beyond fuzzy, feedback-drenched power chords and the constant, hypnotic drumming. You had better hope you like the main riffs, then… Originally released in 2013 on a Holy Roar split with Bongripper, if you missed it last time round, now’s a good opportunity as ever to become well acquainted with it.

Side B, which gives a sample of the sludgy Deadsmoke, opens with thirty or so seconds of rain. The guitars feed back ominously as ‘Dethroned Concrete’ makes its arrival in style, with creepy-sounding guitars that crescendo into to raw darkness. The vocals take on a tortured scream to complete the cynical vibe. It turns from the initial sludgy ominousness into a filthy groove, and there is some musical progression and clear movements within the piece, unlike the Conan track. Clever uses of feedback and a pounding, tribal drum outro really enhance the intensely dark atmosphere. ‘Dead Minds Army’ is another bad trip from its first deranged seconds; with a much shorter runtime than the rest of the EP, it comes across as more concise than the other songs, but doesn’t feel out of place. Equally ugly, the riffing is pure, unadulterated malevolence. A simple, fuzzy outro sees the EP fade out (and back in) for its last minute. You’ll need a minute to breathe and take it all in if you’re new to this band.

How do the sides complement each other? Whereas Conan lull you into a fuzz-induced trance over ‘Beheaded’, Deadsmoke are more the type to take you on a (very hellish) journey. It’s a good way of comparing how two bands can create long, atmospheric doom/sludge metal pieces and produce two very different results. ‘Beheaded’ isn’t necessarily one for those who haven’t heard Conan before – maybe try working through their albums backwards first – but it is a worthwhile gem in their discography for their longterm disciples, or connoisseurs of particularly crushing, stretched-out doom (who probably know about them already). I was particularly impressed by Deadsmoke’s side, as someone who didn’t know anything about them before hearing Doom Sessions. With progressive elements and the darkest, blackest psychedelia within their sound, they are undoubtedly ones to look out for.

Worth buying if you’ve got a vinyl player, love sludge and doom, and want to support a great label.

Doom Sessions Vol. 1 is out on Heavy Psych Sounds on July 17th 2020. Preorder it here