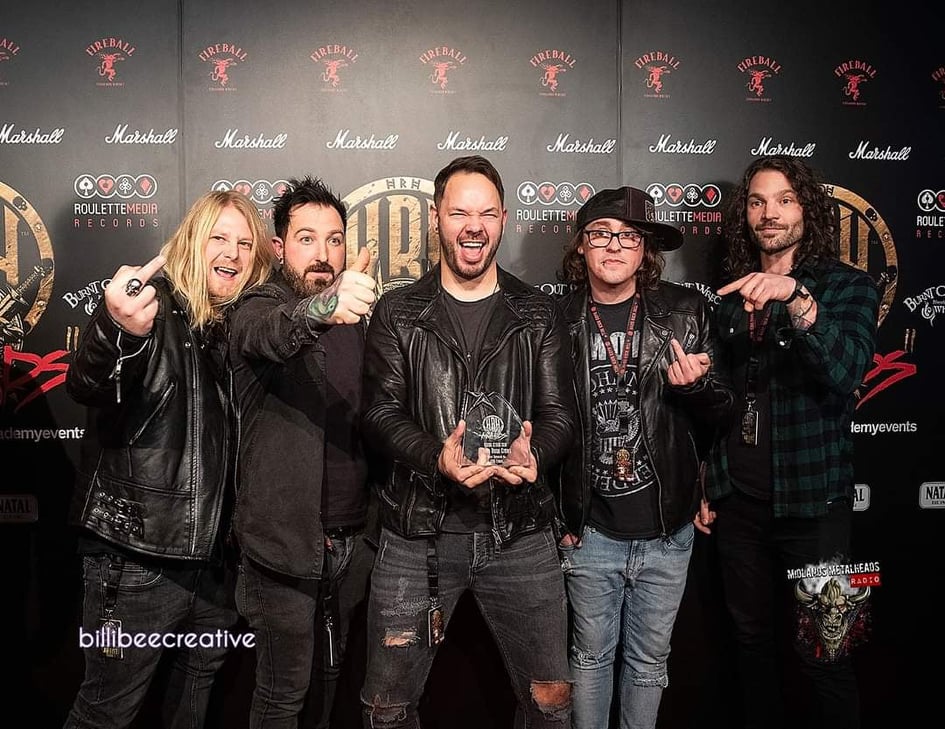 I briefly saw these guys for a couple of tracks recently and wanted to hear more so I was looking forward to this! The band released their debut EP ‘Life or Death’ in the summer of 2018, with the title track featuring on BBC radio, and EP ‘The Path’ in March 2020 and are following this up with an album release date tbc, ‘The last remaining light’.

They do a fierce 6 track set and their sound is powerful and thunderous; a smooth velvety vocal triumphing in ‘Edge of Tomorrow’ and a hate-fuelled ‘Six Shots of Hate’ which is enormous fun. I’m not a big Alice fan but their cover of ‘Man in the Box’ is immense. I have to say I think this may be a band to watch out for. I didn’t get chance to look at the merch but I will be back soon lads!

Setlist: Godless Men, Ghosts in the Machine, Edge of tomorrow, The last remaining light, Man in the box (Alice in chains cover), Six shots of hate

This is the best I have ever seen STC perform – Joe’s vocals are on point, they are full of life and bursting with energy, and the new guitarist fits in great.

‘Serendipity’ gets those heads banging as the audience get a taste of what this Sheffield band has to offer (and they seem to like it). I’ve said before that since Joe took over vocals their sound is harder and edgier whilst maintaining that melodious vocal lead.

They are entertaining and charismatic and put on a great show! Check them out at Winter Rocks in December.

Damn, those crows put on a hell of a show! This band have it all; huge vocals, killer riffs and relevant lyrics, all delivered with the kind of style and panache that only comes along a few times in your lifetime. They make you laugh – Shane notorious for his comedy on stage aswell as his fantastic voice, guitar and piano – and they can make you cry – with themes of suicide and depression in their lyrics their songs are expressive as well as eloquent. But most of all they make you sing and dance til you drop!

The band comes on stage to applause before Shane bounds on and they begin an amazing 90 minute set with ‘Who Did It’ – opening track from their ‘Point of No Return’ album of 2020. The crow army is out in force as the large venue is packed to the gills with feverish fans.  As ever, they are energetic and passionate, Shane’s vocals simply mesmerising throughout. The sound and lighting is spot on, and TDC literally blow the roof of the Corporation.

After a long miserable 18 months you can tell that tonight is restorative for the band as much as the fans. They forge a great connection with the audience, Shane at ease as frontman, often in amongst the crowd on the floor, and they are met with sheer adoration. The pace never slips, the energy incredible and creating a real buzz in the room, as they power through a fantastic set which features some of the best rock and roll has produced in the last few years, indeed I’d go on to say ever.

‘Behind These Walls’ is phenomenal and one of the highlights of the night as they audience go wild. ‘Sick Of Me’ is their newest track, released as a single and on the new digital of ‘Point Of No Return: Ultimate Edition’. It’s about the battles we feel within when faced with such adversity as we have recently.

‘Be You’ sees Shane with a guitar in his hands and is my absolute favourite Crows track – I sing it rather badly to my teenage son daily much to his disgust. It’s an incredibly meaningful and emotive song that resonates with me, beautifully and flawlessly delivered, sounding just as good live as on the record.

Shane momentarily disappears from my view then I’m delighted to hear the tinkle of his fingers on the piano as they perform ‘Never Win’ and ‘Blink of an Eye’ magnificently (and seemingly effortlessly). It’s heartening to look round at a gig and see everyone singing along with every word and this is the case here. It gives me goosebumps.

The performance of the whole band is flawless and dynamic and it’s obvious to all of us that they love being there as much as we do. This makes for a very special show.

It’s difficult to keep track of the time during this TDC party but I’m aware that we must be coming to the end of the set, which would make me sad had I the chance to catch my breath, but their stride never falters and hit after hit culminates in what we all realise is the final track ‘Rock N Roll Ain’t Dead’ – the TDC mantra.

If the rest of the dates go the same way, this tour will surely be a landmark in the growth of the TDC and the crow army, the future theirs for the taking. This is a difficult show to beat. And that’s what I’m telling the bank manager when they look at my balance after the merch…

Setlist: Who Did It, The Fighter, Long Time Dead, Behind These Walls, Don’t Give a Damn, Devil in My Pocket, Breakaway, Sick of Me, Set in Stone, Kingdom of Dust, Be You, Someone Someday, Never Win, Blink of an Eye, Sin on Skin, Send the Reaper, Go Get It, Rock N Roll Ain’t Dead