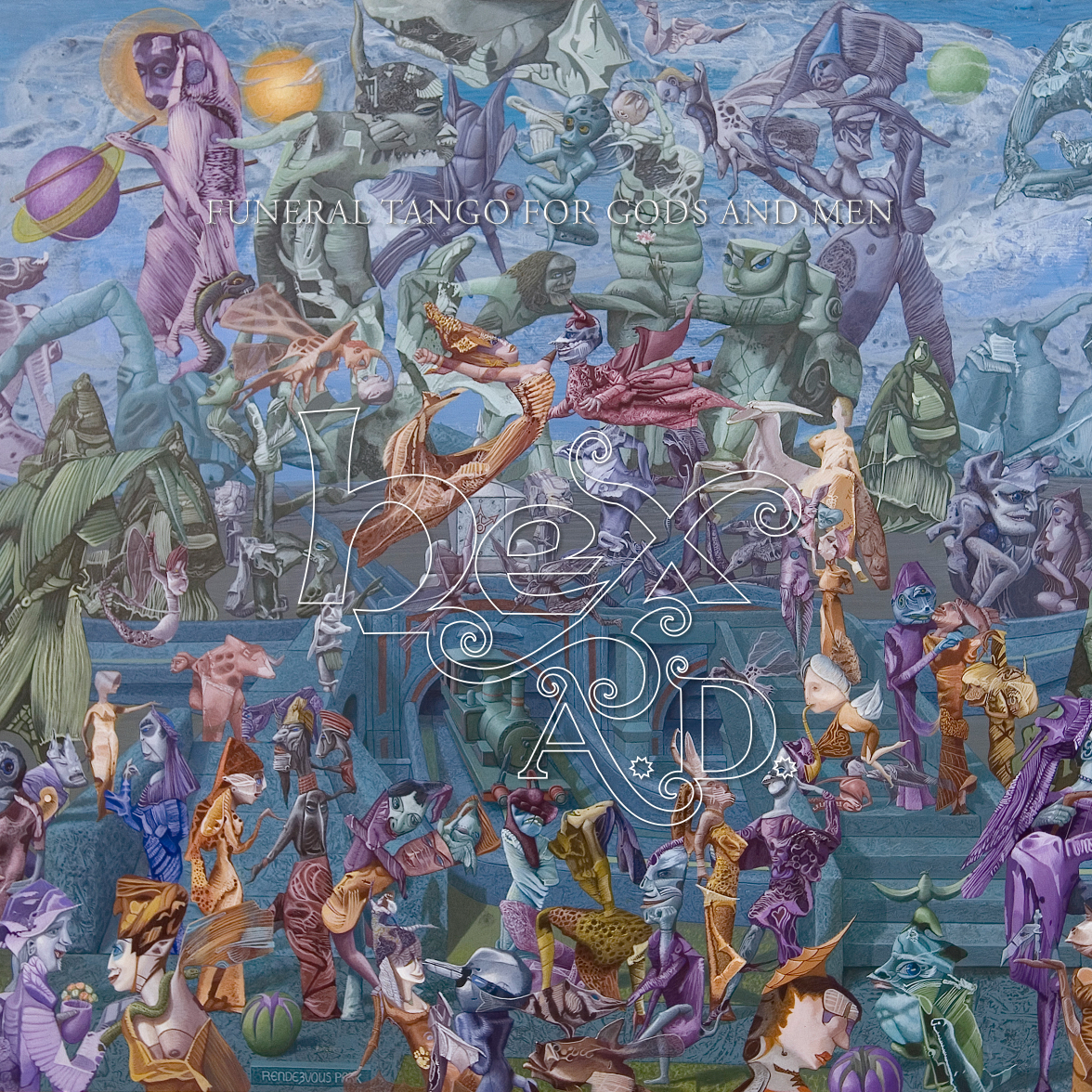 I wasn’t familiar with Hex A.D. before hearing ‘Funeral Tango For Gods & Men’. A four-piece from the town of Larvik, their vintage style draws from 70s progressive rock as much as it does from classic doom overlords such as Black Sabbath and Trouble. Bassist Arry Gogstad and vocalist, guitarist and mastermind Rick Hagan will be familiar to some from playing together with Blaze Bayley, Paul Di’Anno and Tim Ripper Owens (yes, from those bands!), especially live on their Scandinavian tours in the first half of the 2010s. There are further ties here to metal royalty; Rowan Robertson, who famously joined Ronnie James Dio’s band as a teenager in 1989, appears on a couple of tracks here and is considered the band’s unofficial fifth member. Norwegian guitar icon Ronni Le Tekrø also guests, famous for his work in TNT and for counting Zakk Wylde amongst his admirers. I guess I’d consider Hex A.D. to be a band I’d heard of, but didn’t know I’d heard of. Let’s dive in…

Introductory track ‘Naadegave’ opens proceedings with creepy organ and lead guitar melodies. A deftly executed key change sees Hex A.D. slowly build into ‘Seven Blades’, which has a killer 70s-metal groove. Injecting the album with energy as it properly gets going, its catchy, fist-pumping chorus and Sabbath-style darkness makes it one of ‘Funeral Tango…’s most memorable tracks. An off-time, doom-laden riff opens ‘Got The Devil By The Tail’ as it drops into a mournful, atmospheric verse. Hex A.D. make use of an interesting key change for the song’s chorus, that gives it a dark, mysterious yet epic feel. As it evolves into a blistering guitar solo section, there’s certainly a nod to melodic masters such as Maiden and Priest, but with dark psychedelic undertones that are usually absent in traditional heavy metal.
The proggy ‘One Day of Wrath, Another Gesture of Faith’ follows. It retains the sense of epic, but in an ambitious, grandiose way rather than the doom and gloom of the track before it. The winding, proggy instrumental section is, again, very cool and well-executed. Both Mags on the keys and Rick on the guitar are given time to shine, demonstrating their musicality as individual players. ‘Painting With Panic’ follows, with a much shorter runtime that is well-placed after the two eight-plus minute tracks before it. A dark intro goes into a furious, driving rock groove, making the most of Rick’s alternate aggressive vocal style. It’s noticeably more upbeat, but the doomy undertones and tasteful lead guitar playing prevent it from feeling out of place on the album.

‘Hell Hath No Fury’ brings the tone down with a soothing, colourful chord sequence that alternates with a crushing chorus, evoking a bit of early Cathedral. Full of emotion, the acoustic guitar layering is really effective and Rowan Robertson’s guest guitar work really adds a touch of class, although it arguably outstays its welcome a little. The Candlemass-y ‘All The Rage’ is a strong song, with addictive guitar chugging and diabolical guitar lines to make it a standout number from the album – possibly helped by its relatively shorter runtime. Rowan’s lead guitar playing is, again, fantastic, and could help see ‘All The Rage’ become a fan favourite. The three-part ‘Positively Draconian’ is the longest and final song. A mournful piano-led intro gradually darkens up before Hex A.D. pick up the pace with another killer vintage metal groove and Ronni Le Tekrø makes his presence known with quality lead playing. Its melodic, powerful outro serves as the album’s epilogue, feeling like the true end of a journey.

In a single word, the lasting impression many will get from this album is an epic one. Whether in a slow-burning, doomy way or a resplendent, progressive manner, it’s these emotions that are most likely to bring listeners back around for repeat spins. Some might say that a few minutes could have been forgone here or there, although the more direct songs and interesting, unpredictable structures prevent the album from simply becoming a slog. The heavy use of keyboards and organ, combined with the Sabbath-isms and deliberately retro stylings give Hex A.D. a certain appeal that will make fans of Ghost turn their heads; although their progressive edge and more explicit old-school heaviness may well make those who don’t like Ghost turn their heads, too. The individual musicianship on show is outstanding, and the guest appearances add extra dimensions to their songs, although the songcrafting may not sway any newcomers or fence-sitters to the genre. Nevertheless, ‘Funeral Tango For Gods & Men’ is a good effort and warrants a listen from any retro fan.