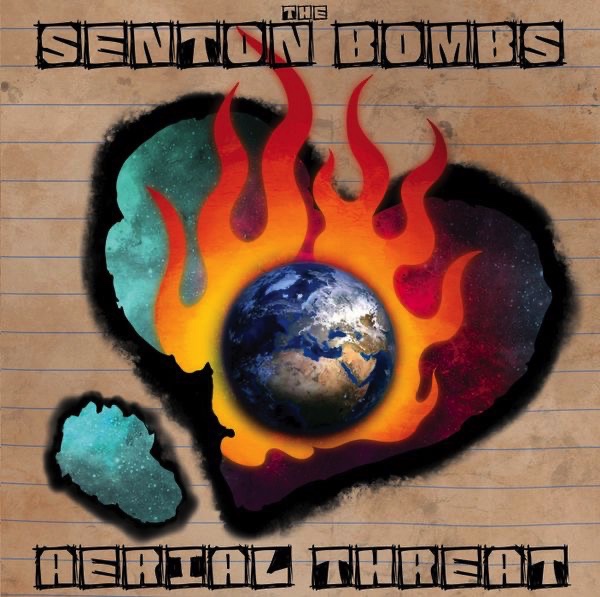 I like the title of this new album from Blackpool’s finest. The thought of an aerial threat conjures up a lot of possibilities, like falling masonry, heavy rain or even Seagull sh*t, but I’m tempted to say my favourite would be bombs and those would be The Senton Bombs or is that a bit too cheesy? Anyway, the Aerial Threat is real and it lands on the 27th. This is the sixth studio album from Joey Class and his crew, 14 tracks, stacked to the hilt for our enjoyment.

Originally formed back in 2004 the Bombs have endured changes and relentless gigging over the years and have now built up a solid fan base. They’ve appeared at several festivals including Breaking Bands and the finals of Highway to Hell in Glasgow, although it was probably in 2016 when they signed to the German record label 7Hard, that the rollercoaster started to run a bit faster. The fourth album ‘Mass Vendetta’ was released and singles were aired on both the Planet Rock and Kerrang Radio stations. In 2017 they increased the pressure with more festivals such as HRH Sleaze and HRH AOR and following those shows they brought out the fifth album ‘Outsiders’. This earned them support slots for acts such as Supersuckers and Bullets & Octane. 2019 was spent writing the latest album and now at last they can begin to reap the rewards.

‘Blue Sunset’ was the second single from the album, so many SB fans will already know it quite well. It’s quite a staunch rocker for an opener, a load of bounce and really vibrant, with an engaging catch. Again the first single ‘Be What You Want’ has a hook astride a running bass and some guitar interference, to make you pick up your ears. Punk Rock with a modern twist, Post Punk if you like, is one of the Senton Bomb’s much favoured styles and they do it to perfection.  ‘Another Way’, ‘Sleep Street’ and ‘High School Low’ line up to hit us with incessant pumping, the latter is not unlike the Ramones with a bit of Lancashire.

As ‘Aerial Threat’ reaches track six, ‘Dwelling In The Past’ I notice a change in the air. It’s a fast number with a cool melody and there’s still the essence of punk with a driving guitar riff, but this one has a more softer edge. ‘Sin On My Mind’ is my personal favourite. A borderline ballad with charismatic chords and a denser atmosphere than Venus. Wondrous vocals from Joey and I like the way it breaks into more depth towards the finish. ‘Cheats Prosper’ continues the change in the wind, with whirling guitar and a chorus of ‘Hey’s’. Fast and highway hitting in frequency and there’s a hint at the Doors in part, with the streaming strings. ‘Rise Of The Underdogs’ has a charming melody and the drumsticks of Scott Mason include Cowhorn tapping if i’m not mistaken. ’Storm Of The Castle’ heads back to the punk rhythm, it’s fast and crashes into everything around it. The delicious guitars, courtesy of Johnny Gibbons and Damien Kage, add a load of the dog’s proverbial’s, so yeah, this track is another that stands out.

‘English Dreams’ is probably the odd man out. A tale being told to uphold a message or the thoughts and wishes of a perfect world. It comes across as something deep and personal for Mr Class and I have nothing but respect for this. ‘Satellite’ increases the tempo with its melodic harmony. This is a really pleasant song, light and higher in pitch, jolliness is in abundance. ‘Lake’ is about the discovery of something below the surface and whether you take that literally or peer more into its dark waters, the end result is the same. This march of a song, allows the other side of The Senton Bombs to get some air. Quite a beautiful and crafted piece, the howling guitar and gentle vocals complement each other so well, it’s truly outstanding. ‘Coaster’ (which was also out as a single), is the last up, so to finish we get a sleazy Blackpool ballad, but get that groove, T.Rex mixing with the Dog’s D’Amour. Joey wrote this as a lesson in life to his children, but the lyrics can be a message to all of us.

‘Age is just the counting of rotations round the sun, don’t let the growing number spoil the fun’ – Coaster.

‘Aerial Threat’ being the sixth album from The Senton Bombs, has all the rich diversity you would expect from an experienced crew. Something different at every corner and it’s full of surprises. Already a hit with fans and those who have managed to get a copy, this is going to be another contender for album of the year, make no mistake.

‘Another contender for album of the year, make no mistake’