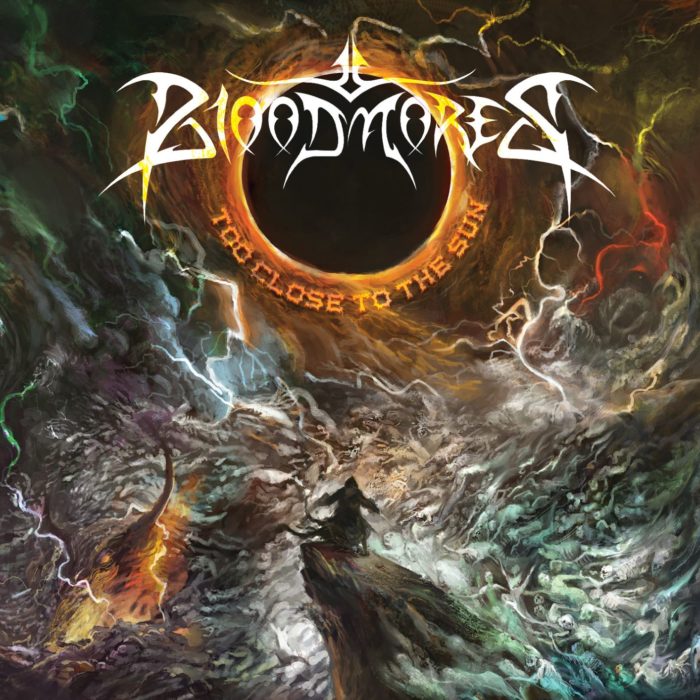 Hailing from the North West of England, Bloodmores are a four-piece band who take inspiration from a wide scope of metal influences, most prominently thrash and melodic death metal. After the release of their debut The Seeds of Seasons in 2019, Bloodmores have returned with their second effort Too Close to the Sun, a dynamic and furious slice of the contemporary underground metal scene. I was instantly drawn to this album after seeing the artwork and how truly striking it is. It reminded me of the same chaos that is painted on Power Trip’s Nightmare Logic. This blend of intricacy and anarchy is something which Bloodmores take beyond their aesthetic appeal and straight into their music.

Opening track Virulence is pure aggression from the very beginning, complete with an almighty guttural yell that’s reminiscent of Amon Amarth. The chorus is chaotic and cathartic before an almighty breakdown with crushing palm muted riffs. The lead guitar work is just sublime, the notes sliding with speed and complexities with ease, both in the breakdown and fully flourishing in the following instrumental section that’s full of heavy twists and turns.

Terminal Diagnosis opens with such a fantastic quintessential thrash riff that sets the tone of the entire song, a ferocious outlook on terminal illness. The chorus is such a melodic rallying cry and I can easily visualise this bringing everyone together in the eagerly awaited return of live shows.

Entombed in The Fires of Armageddon’s Womb is one of the most brutal tracks on the album and easily my favourite song title. This attention to the power of words is not only visible in Bloodmores’ title tracks. It also seeps in with full theatrics and darkness into their lyrical content. Entombed in the Fire’s of Armageddon’s Wombs concludes with the line “Our time withers away as we all stoke the flames” which is just stunningly poetic. This duplicity of sheer musical aggression coupled with pockets of moments where words just weave together with symbolic ease is what I adore about metal. It has to be done right of course and there’s no doubt that Bloodmores know how to craft lyrics brimming with expressive language and imagery.

The opening of Crypt of the Blasphemous reminds me of the intro riff to Obituary’s Redneck Stomp. Slow, purposeful and heavy as hell. With the prolonged riffs shifting into a steady palm mute in the verses, there’s real room here for the vocals to attack and powerfully deliver the lyrics with clear intent. I’m reminded of the guttural spoken word style of Lamb of God’s Randy Blythe throughout.

White Noise is one of the longer tracks on the album and injected with the very best of melodic death metal, allowing room for beautifully slow and atmospheric instrumentals amidst the hostility. Too Close to the Sun holds attention with its dramatic flair, bursting with complex solos and riffs that command and entice the listener in.

What follows is nothing short of pure speed. Suicide Pact is relentlessly fast, the energy of every member of the band at the absolute pinnacle. This is followed by Buried In An Unmarked Grave featuring a solid thrash riff and drums beating rapidly like artillery fire. The guitar solo here is amazing, opening with notes practically screaming under the influence of the whammy bar.

Too Close to the Sun gradually concludes in the same vein of its hostile beginnings with Husk driving forth with momentum and pure belligerence. Admittedly my attention span does begin to dwindle here due to the merging of similar riffs and melodies. Defiant to the End, a cleverly titled track to fully complete the album, features vocals which drip with strength and conviction throughout. The energy of Bloodmores does not falter for one second, each riff and beat united and powerful.

Bloodmores have independently released an album that’s full of recognisable influences yet still offers that freshness we all crave when listening to a new band. Admittedly the first half of the album is stronger, yet the effort as a whole is still an excellent display of classic thrash and melodic death metal intertwining in contemporary form.

Go give it a listen.

Highlights: Virulence, Entombed in The Fires of Armageddon’s Womb, Crypt of the Blasphemous.