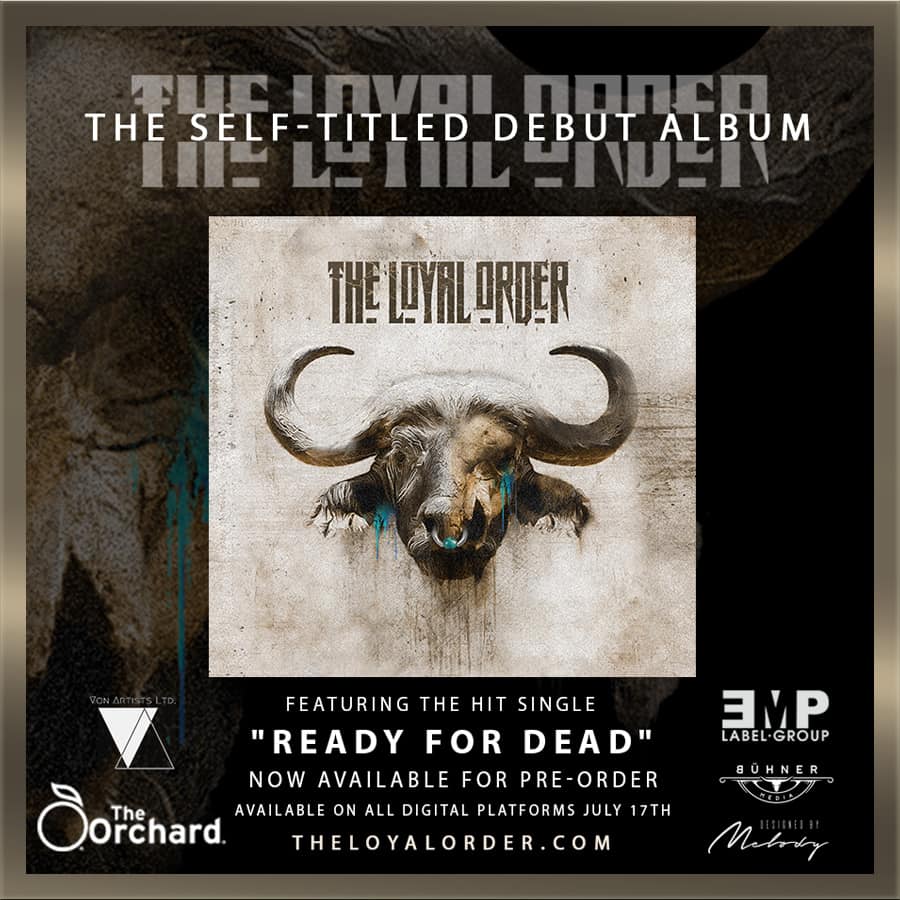 Caz Parker recently caught up with The Loyal Order from across the pond on the eve of the release of their debut album, to talk about the songs, the album release and of course the bit of general silliness that we’ve come to know and love, check it out below!

To coincide with this Tina C. got her hands on the brand new debut album for REVIEW!!!

The Loyal Order are a hard rock band currently making waves from across the pond in Portland, Oregon, featuring the imposing Jeff Buehner on Vocals, guitar wizard Brandon Cook and Patrick Young on Bass (you may be familiar with them both from Black n Blue), Justin Gibson on Guitar and Kyle Baltus (36 Crazyfists) on Drums.

You know when you hear the opening 20 seconds of a band and you immediately have high hopes, yes that. Nine tracks later and I don’t just like this, I bloody love it! There’s so much going on here to get your teeth into, where do I begin, The Loyal Order… where have you been all my life!

With opener and first single ‘Ready for Dead’, they’ve entered the TOP 30 on Billboard’s Mainstream Rock Indicator Chart and rightly so, it’s a belter and could easily be on any of the big boys albums. To my ears I’m hearing a heavier Lit! They’ve got the hooks that have you singing along instantly, but there’s no messing about with bounce-around pop here, it’s full on hard rock, melodic but heavy, with a twin guitar attack, raspy vocals and an underlying heaviness but still radio friendly, my holy grail of sound!!!

Latest single ‘Hellfire’ begins “it’s fucking pointless” straight away I’m right on board with that little life mantra lol! I’m glad they’ve chosen this as a single as it’s my personal favourite and hot off the press I’m just hearing news that this is storming up the charts now too, go on lads, totally rooting for you! Simply, this rocks, hard and classy. It’s clear they could probably write a song in their sleep and it would be the best thing you’ve ever heard, the structure and phrasing is top class and you’ll instantly be rocking to the riffage, reeled in by the hooks, singing along to the chorus, digging the guitar solo, admiring the cleverly crafted lyrics… there’s just soooo much to love here, this is the complete package, the real deal, sit down the professionals are here to give us a lesson in how it should be done.

A slower melancholy post-grunge interlude with ‘Half Life’ “breathe in your faith, call down the snakes” and “we were holding hands on our broken glass highway” absolute class lyrics are a feature throughout this entire album. Next we’re dragged back kicking and screaming with the solid modern edged  ‘Fuck or Fight’ “I just found out that you don’t love me, I just found out that you don’t care, put another scar next to the others, come on fuck or fight baby I don’t care” this may be my new Monday morning anthem!

Ballad ‘Colorblind’ shows us a more sensitive side, but delivered with a dark undertone and gritty passion à la Sixx AM, with a grand production and Jeff’s rich vocals, it’s an absolute pleasure to listen to.

At times channeling a touch of Soundgarden and definitely a bit of the Foos on ‘I Fall Silent’ and then we’re into the closing rounds of punchy all-rounder ‘Superhuman’ before showing their lighter side again on ‘The River’, I’m getting an Extreme ‘Three Sides..’ era vibe here, big big sound.

Surprising album closer ‘Fall to Rise (Sabachthani)’ goes up a level in terms of heaviness and sticks it to you loud ‘n’ hard ‘n’ heavy right between the eyes, with the full force of Jeff’s mighty voice and crunching guitars ablaze, talk about going out with a bang, super strong finish! This album has it all, plenty of diversity with subtle changes in style throughout to keep you interested from start to finish. All killer no filler as they say.

I’ve had this on in my car and on my headphones at night just so I can get some quality alone time with it, this is so damn good it deserves full immersion, I just can’t get it into my ears enough! I feel like I am listening to an established band of stadium stature, holy shit it is hard to believe this is their debut album!!!

If there’s any justice in the music world (which we fear there is none) but if there is, this should be HUGE and fingers crossed they make it over here to treat us to seeing these superb songs performed live, on a big big stage is where they belong! A corker of a debut album, it’s big, it’s meaty and there’s real substance here. All in all this is the best thing I’ve heard this year, serious album of the year contender and I’m so excited I’ll be making everybody listen to it, on repeat, forever.