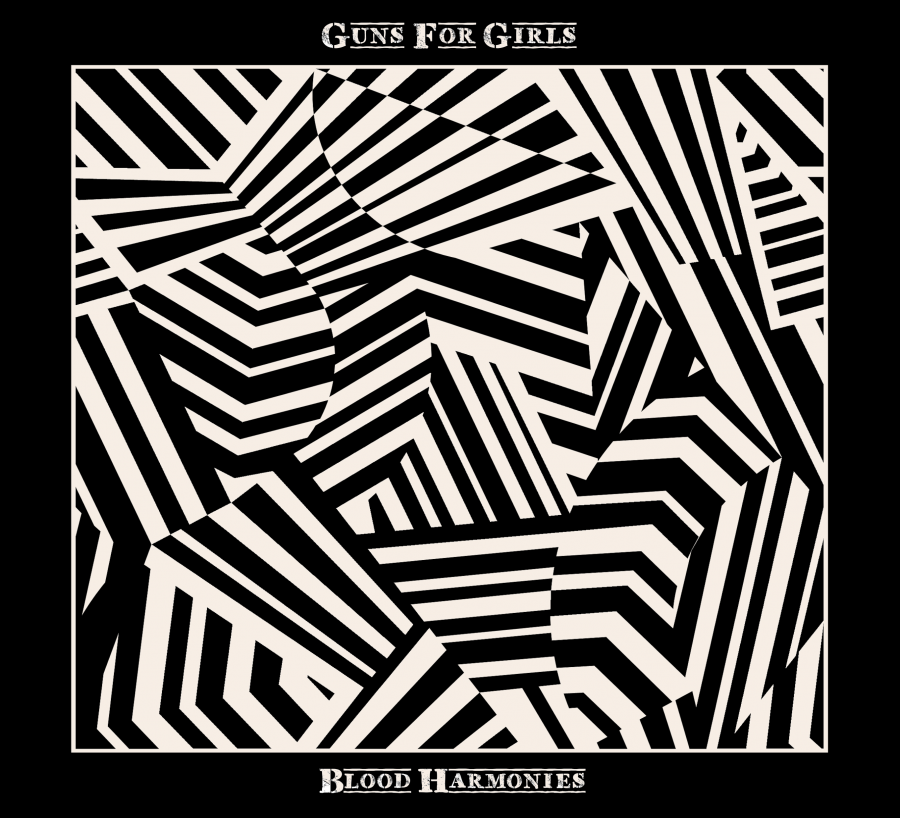 MMH last caught up with Guns For Girls at Dementia Aware Fest in Birmingham in February (check out our website for review, gallery and interview conducted by the awesome Caz Parker). But today we get our hands on the brand spanking new debut album for review ‘Blood Harmonies’.

Hailing from Telford, these Black Country Music Awards nominees, have been described as alternative groove post grunge, with previous single ‘Heads You Win’ being played on Kerrang, with all this in mind we set about listening to the album.

Guns for Girls are Gavin Herbert on vocals/guitar, Carl Haden bass/vocals and Dylan Caine on drums and they are Dirty Scuzz Grunge Pop! Well that’s where I’ve put Guns for Girls in my head (yes I know my head is a very ‘special’ place indeed!), you can put them wherever you feel fit, but do yourself a favour and do put them in your head!

Opener ‘Over The Shoulder of the Devil’ chugs along with a spectacular groove and I’m singing along straight away as I go about my day “woahhh kill your idols”.

Guns for Girls have this great knack of blending somber low grinding music with poppy harmonies and chorus’ and I’m really loving that mix of styles, influences cited are the likes of Queen of the Stone Age and Royal Blood, what’s not to love there.

‘Where is the Sun’ is my favourite track and how Guns for Girls first caught my attention, call me mad but I can sometimes catch very brief glimpses of Bowie and Beatles and this track wouldn’t be out of place on an Enuff Z’Nuff album!

‘Finale’ comes in strong with a heavy pummeling chorus and Nirvana are brought to mind, next up ‘Secrets’ I love this one it makes me dance! Blending a little punk, a little indie, a little pop, just good foot tapping music to rock out to!

Really digging the hypnotising melody of ‘Animal Instinct’ and it’s laid back indie vibes, followed by the haunting ‘You Are The Gunfire’ and be sure to check out the video below for a glimpse of yours truly and my MMH partner in crime Caz Parker!

‘Black Rose’ is a highlight that rocks out mid album, as is ‘You Get What You Give’ with it’s cool tempo changes, album closer ‘I Found A Way’ lulls you into a false sense of navel gazing then out pops a well poppy chorus to lift you up, ending on a pop-rock indie trippy high!

Recorded and produced by the band themselves, the album is released TODAY, what are you waiting for! Rather than let a producer have their take on it, they wanted to create their own sound, using their own equipment. To finally solidify the album; on mastering duties they have hooked up with John McBain, founding member of Monster Magnet and one time guitarist for Queens Of The Stone Age.

An interesting mix of styles and a solid slab 11 tracks long to get your teeth into if any of the bands/styles I’ve referenced above are your thing, definitely check this out!