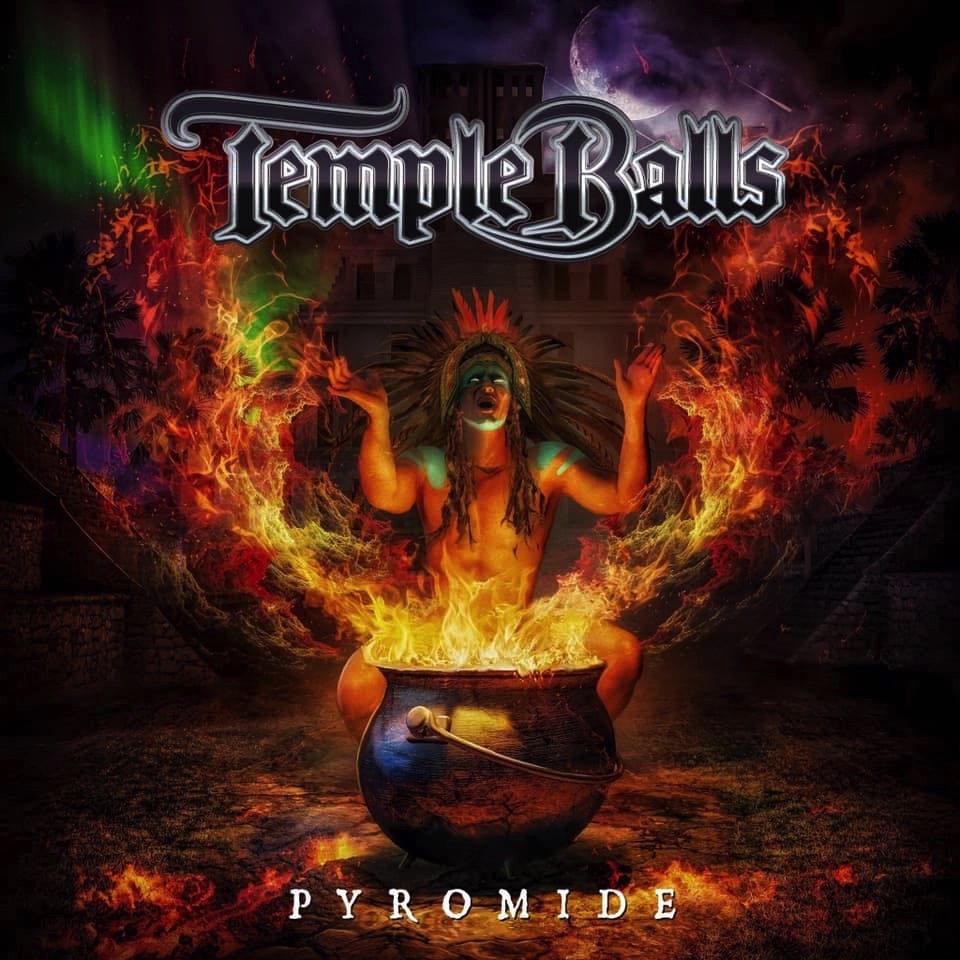 The third album from this young energetic rock band, ‘Pyromide’ is the follow up to the 2018 hit ‘Untamed’ and Temple Balls have enlisted Jona Tee, the keyboard player from H.E.A.T to produce it. The guys have been going since late 2016 and besides playing all over their native Finland, have already toured Japan and the Ukraine. They have supported names such as Queen, Deep Purple, Sonata Arctica and Uriah Heep while on the road and later this year they head out with H.E.A.T for a lengthy European tour, so it’s all systems go for these nordic hard rockers.

Pyromide consists of Eleven tracks and the first single ‘Thunder From The North’ is the opening number. ‘Whoo Hoo’ it’s fast and sleazy with a crashing of riff repeating and screaming vocals from Mr Arde Teronen. So much heavy hitting it’s a stunner and the twin axes of Niko Vuorela and Jiri Paavonaho drag you in their wake. ‘Long Ways, Long Lies’ is on firmer ground and takes the AOR stadium stance and catapults it into the Northern Lights. Lots of fast finger work again from the guitars and the vocals are deeper and have that same kind of attraction you get from Tempest and Coverdale. ’T.O.T.C’ (Thrill Of The Chase) is a pumping rock and roller, with a Skid Row/Monkey Business kind of rhythm. Cheesy chanting and low fret manoeuvres make it one to shout along to and it should prove one of the favourites on the forthcoming tour.

‘Fallen Youth’ takes us on a backwater ride. Sturdy and having an increase in dimension, it gathers like a storm and there are more impressive guitars. The Drums of Antti Hissa are also prolific and I like the way the sticks are really clear in the production. ‘Bad, Bad, Bad’ is a twisting and bending track with a kick Ass attitude and as the title suggests it just rocks, like a real bad boy. ‘As we reach halftime, and ‘What Is Dead Never Dies’ it is evident that Temple Balls, have a variety of noise infused influences and each song so far, has easily stretched them to deliver something different. ‘Unholy Night’ with its sleazy and dirty riffage, is of course, one of my favourites. Slithering along on full pulse, pumping and grinding like a proper bitch of a mother. The messy and succulent guitars are totally amazing and the song ends on rapid firing and then sudden death.

‘Heart Of A Warrior’ lives up to its title, beating heavily with the long march and anticipation of battle. Another that is more in the AOR and epic theme, with an underlying rhythm from Hissa and bassist Jimi Välikangas, enough to penetrate all four chambers of your own internal organ. Swiftly flowing and having a pile of cosmic effects, it is without doubt a massive and complex piece of work, but Temple Balls deliver it with ease. ‘You Better Run’ is another with a great melodic feel and is even more harmonious, it feeds well into ‘If Only I Could’ with its delicate keys and soul binding vocals. A ballad with all the grace and majesty you would expect from a band, who are masters at pulling on the heartstrings. Last on the bill is ‘Something To Die For’ which has some very technical guitar as an intro. Also having a larger than life and dynamic approach, it’s a grand way for the band to see themselves out.

I suppose Temple Balls are pretty much new to most UK ears, I hadn’t heard much of them before this album dropped before me, to be honest. I like the way they stagger the tracks and vary the tones on ‘Pyromide’. The high level of energy comes across on the recording and the production is top notch. It will be cool to see them on tour with H.E.A.T, later this year if possible, although I can’t see any UK dates as yet. This is an album for all of you who love that big melodic anthem sound, tinged with a little sleaze and no sh*t Rock n Roll.

Join Temple Balls on APRIL 15TH at 7PM (UK) for their live stream where you can listen to Pyromide track by track. You can drop a comment (you’ll need Youtube/Google profile to do so) or just watch the stream, the choice is yours

Tracklist: Thunder From The North. Long Ways, Long Lies. T.O.T.C.. Fallen Youth. Bad Bad Bad. What Is Dead Never Dies. Unholy Night. Heart Of A Warrior. You Better Run. If Only I Could. Something To Die For.