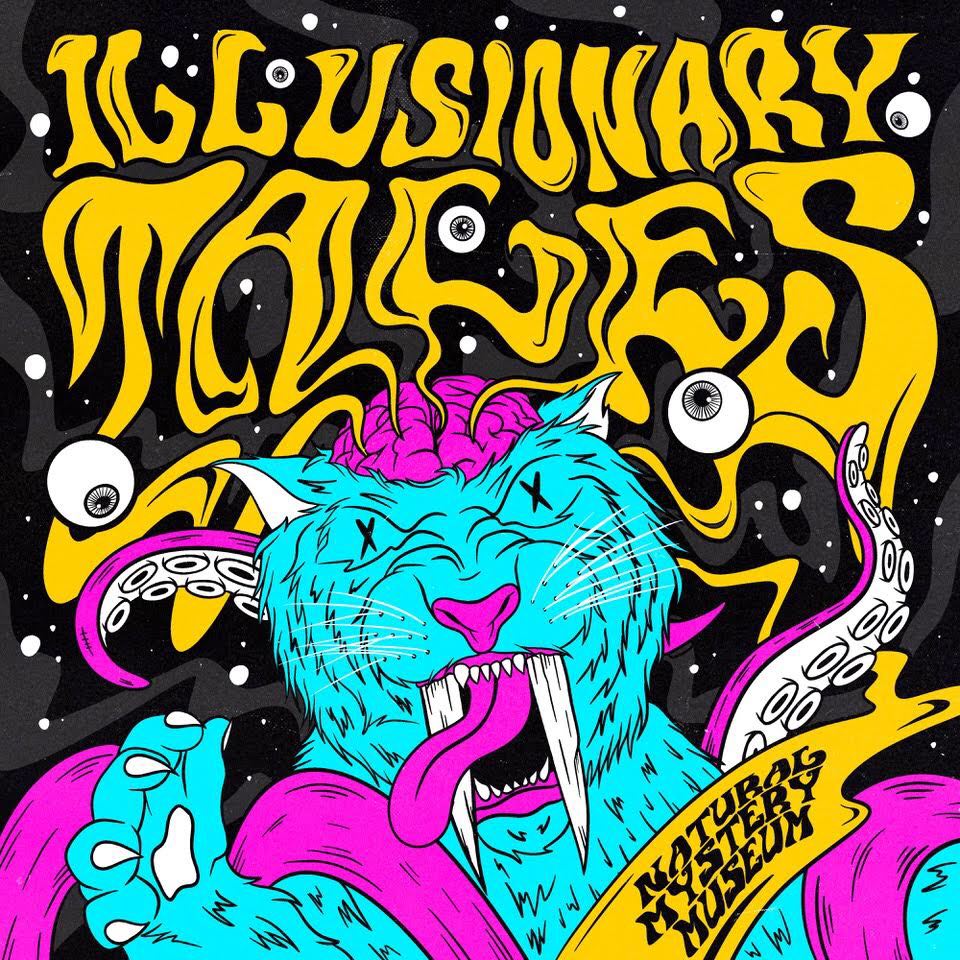 South London trio Natural Mystery Museum’s sophomore effort ‘Illusionary Tales’ comes a couple of years after ‘Volume 0’, which featured ‘Enter the Void’ – picking up an impressive 35,000+ streams on Spotify already. Citing influence from the likes of Jack White, Tom Petty, Queens of the Stone Age, Kings of Leon and The Black Keys, the band suggest a rock sound that will invite a wide potential of fans aboard their ship, although the band demonstrate more than enough character and individuality as to be just ‘another’ British alternative rock band.

‘Sixes & Sevens’ starts the release on a bouncy, explosive rock riff. The verse introduces a rumbling bass with gorgeous tone to accompany the pounding drums that lead into an uplifting, glorious psych-rock chorus. With shades of Muse throughout, Natural Mystery Museum’s modern rock influence is unashamed and direct. A whacky instrumental jam, backed by energetic drumming, falls into the last chorus that you find yourself singing along even before the lines come in. Well-placed vocal harmonies allow it to really stick in your head. The music video to go with it is pure 70s throwback joy, by the way, and worth a watch. ’So Sweet’ has an ice-cool, laid-back vibe that could have come straight out of Josh Homme’s 2000s rulebook. Dripping with swagger and attitude, it has a summery feel to it, although with that magic dose of psychedelic weirdness to really give it some character. It’s hard not to bounce along to it as you listen; this will surely be a highlight of Natural Mystery Museum’s live sets when concerts return. A squealing guitar solo pushes the song through to its close.

The second half of the EP shows off a slightly different side to Natural Mystery Museum. A tender acoustic guitar sees ‘Forget Me Knots’ in on more of a pensive vibe. The gentle buildup and layering of instrumentation is very cleverly done. It has a 60s-esque pop rock feel to it, but far from being ‘stuck’ in this era, some of the harmonies and musical ideas are grungy and could accompany a sunset in the mid-90s. It’s beautifully written, and the music really matches the lyrical themes well. ‘We Don’t Speak’ rounds off the EP on a bittersweet note, as Perry Read’s lyrics wonder if it’s ‘too late to change your mind’, although ‘we don’t speak anymore about it’. The balance of wistful emotion with upbeat indie stylings keeps it from becoming too moody and miserable. Backed with some really tasteful lead guitar licks – both distorted and clean – the instruments tap nicely into the ambiguous emotion of the song.

I really like this collection of songs. All are colourful, breezy psychedelic indie rock bangers, but each with their own character and emotional spectrum. The sound of this band are clear, but they avoid falling into the trap of repeating themselves and flogging a sole musical idea. Although Natural Mystery Museum may be a little way off from standing out from the crowd at this point in time, it takes nothing away from the good, individualist quality of the music on this EP alone. ‘So Sweet’ was my pick of the bunch.

‘Illusionary Tales’ is out NOW