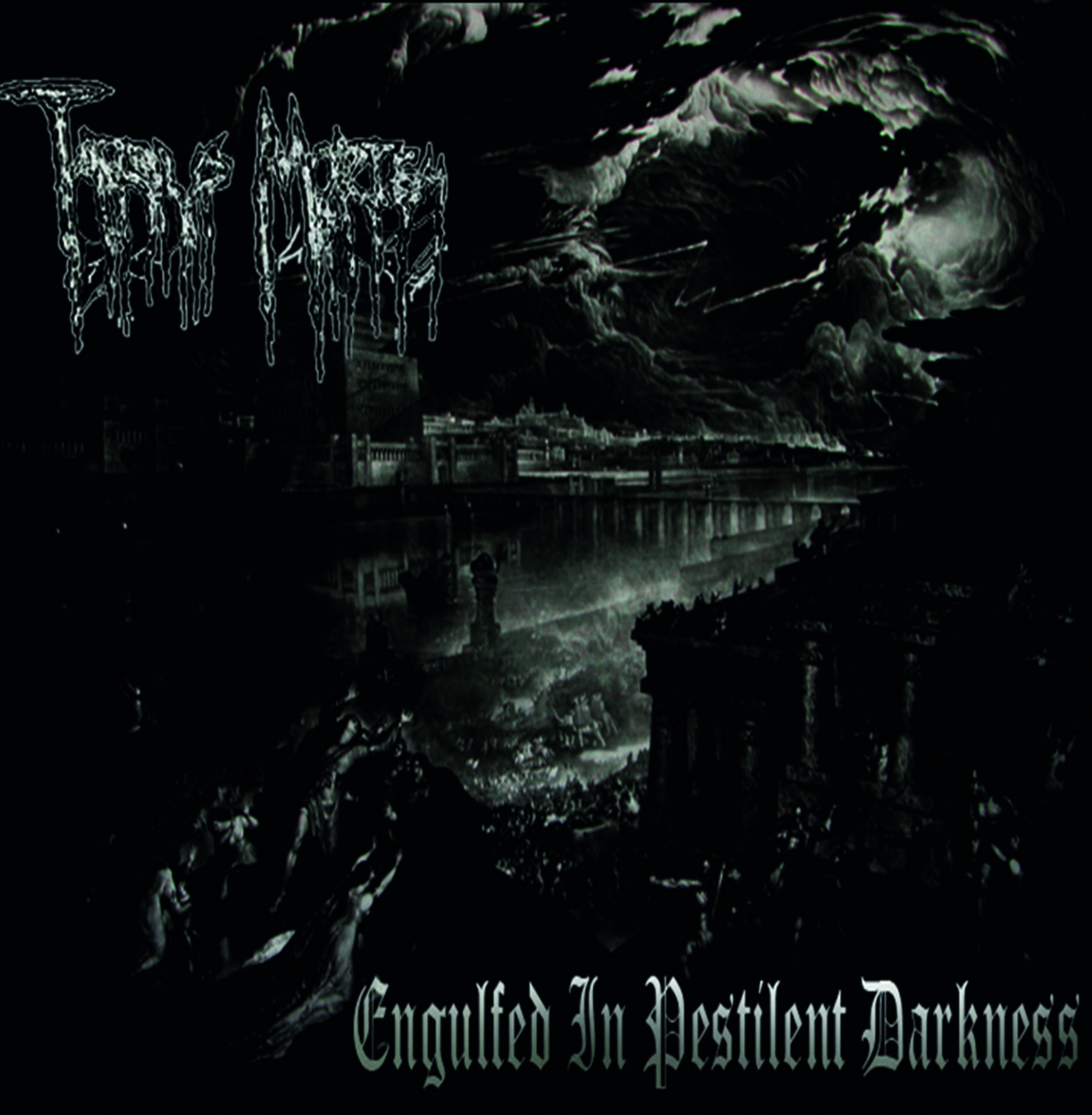 Production is one of the most important but most frequently overlooked aspects of any record. Usually, albums are at the very least acceptably produced so there’s not much to complain about. Sure, I often quibble that certain production jobs are slightly too clean or too nice, or they lack impact, but most of the time one can overlook these problems as the songs are clear enough to enjoy musically. Sometimes a top tier production job really shines, elevating an album to the next level- producers like Kurt Ballou, Brendan O’Brein and Will Yip often contribute to this space. And finally, there are production jobs that completely ruin whatever quality an album may have had- these are the rarest in my experience but when they do appear it is endlessly frustrating.

Given that I’ve started my review of Tardus Mortem’s Engulfed In Pestilent Darkness by talking about the importance of production, one may be given to assume I have a lot to say about how this album is produced. You would be wrong. I don’t have much to say about it other than it is shockingly bad. This album sounds like auditory mush. I don’t mean that this sounds filthy, sludgy, scuzzy or any other adjective that can be positively applied to low-fi death metal production jobs. I mean mush. Everything bleeds together in such a way as to make this album actively difficult to review. The riffs are incomprehensible as soon as the pace picks up, the vocals sound like they were recorded at the other end of a large, echoey cave, and the drums are flat and muted- devoid of life and impact- with cymbals that often are the only element of the sound occupying the treble frequencies. There are, occasionally, guitar solos and lead lines scattered across the album. These are at least clear enough to be comprehensible, but are much lower in the mix than it feels like they should be. The result being one still has to strain to hear what’s being played.

Having said all of that, is there anything of note musically in this album? This is a fairly straight ahead, blackened death metal album. When the pace is slower, there are some fairly accomplished ominous, doomy vibes given off. When the pace picks up however the riffs are- as previously mentioned- lost to the production job. If you struggle through the production and are able to make out a riff, it lacks impact and feels like a stock blackened death metal riff. I hesitate with that criticism a little as it may just be the production sapping any energy from the riffs- there’s no weight or heft to anything, so nothing feels satisfying. As I said, it’s difficult to review this album because of the production job.

Ultimately, I cannot recommend this album to anyone. I really try to find something positive or to identify the target audience for an album even if I don’t personally enjoy it, but whatever redeeming features there may be are lost to the production. I wish I could. I want music to be good, and I want bands to succeed. Maybe next time for Tardus Mortem.

Engulfed In Pesitlent Darkness is out 28th May 2021 and can be purchased here.

You can find out more about Tardus Mortem on: Facebook