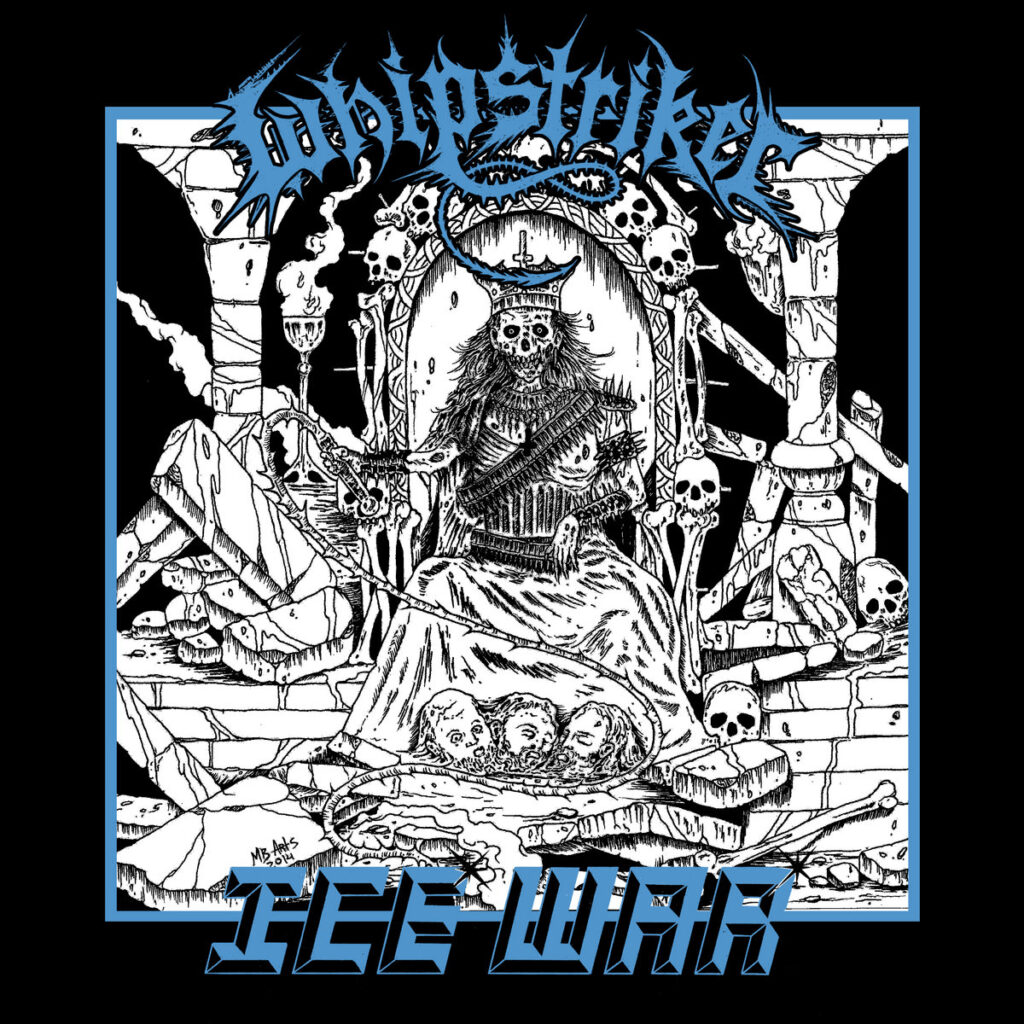 During my time as DJ for MMH hosting the Thrash Bash show, I played Whipstriker a few times so I was immediately drawn to check out this split EP with Ice War. Both bands are excellent homages to traditional heavy metal and bring their own flair of song-writing and approaches to the genre. Both bands feature three tracks on this split and we’ll kick things off with Brazilian based Whipstriker who are by no means strangers to the split EP format being their 24th release in this format, yes that is correct, 24! Since their beginning in 2008 they have had a multitude of smaller releases from EPs, singles and splits and they currently have four full-lengths to their name.

Opener ‘Restless Dogs’ reeks of Iron Maiden during the instrumental introduction part to set the traditional heavy metal theme for the rest of the split. However, when the vocals come in we layer in some of the classic Whipstriker mix of thrash/death/black that culminates in a Slayer/Venom concoction fuelled by the glories and the grit of the 80’s. Whipstriker serves up a shred-tastic fury of tremolo picking and crashing drums that you feel up against the rocks with a stormy sea descending upon you and they don’t let up from here.

Follow up track ‘Rot in Trench’ brings an even more evil atmosphere summoning the essence of bands like Celtic Frost. We also get to see some guitar flare here as the solos that are featured break up the onslaught just enough for you to catch your breath. Whipstriker close out their effort with what feels like an even faster track, ‘Morphine Soldiers’ and is a perfect blending of all of their influences including fellow countrymen Sepultura. There have been a lot of comparisons here, but make no mistake that Whipstiker have clearly got their own style and aggression that leaves nothing wreckage in its path. A superb first half!

Heading over to the Ice War side now, we still get that slice of traditional heavy metal but more so rooted in the classic bands like Accept and Manowar with the production taking a noticeably more raw approach. Ice War opener ‘Warfare Cry’ keeps the tempo high and heads banging with lightning fast riffs and triumphant vocals provided by sole member Jo Capitalcide. Next up is ‘Grip of Death’ which again keeps things moving along quite swiftly. Another strong vocal performance is the highlight of this track with an empowering chorus and pre-chorus that like counterparts Whipstriker brings an essence of Iron Maiden with it.

Closing out the split is Ice War’s track ‘In Your Heart’ which opens with  Metallica ‘Whiplash’ style speed but then merges into a guitar hoo which just seems a little out place, which may be a fault of the production style but it just doesn’t seem to quite fit. The rest of the song however continues with the solid quality presented so far and brings the split to a rapid fire end by maintaining the ridiculous speed both bands manage to harness throughout.

Both bands present a great display of their talents in bringing traditional heavy metal styles to the forefront with their own song-writing flair and aggression. However, with the prowess that Whipstriker presents on the first side is the real highlight of the show here and Ice War coming in at a very close second.

Find the bands on: