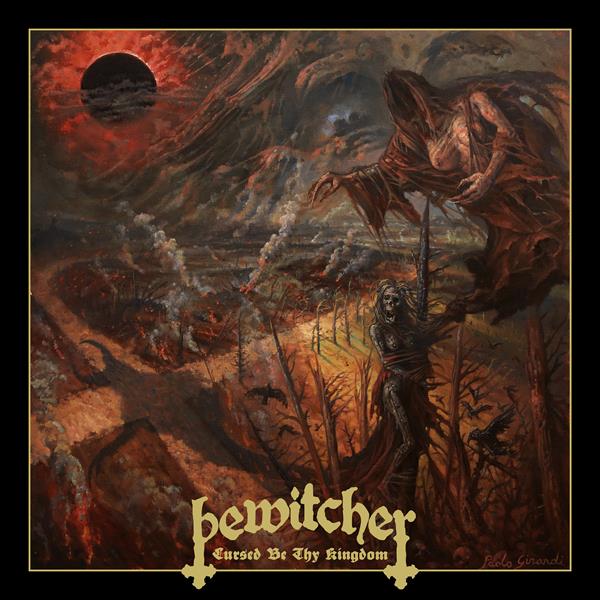 Portland, Oregon based Bewitcher are back with their third full-length entitled ‘Cursed Be Thy Kingdom’ and while there is an occasional dip on the gas pedal, they upped the ante in terms of their creativity, songwriting and fleshing out their style. According to singer M. Von Bewitcher this album has been a longtime coming over the course of two years and a bit of in-house struggles “and it was in that boiling cauldron of high pressure and hardship that ‘Cursed Be Thy Kingdom’ was born” he says.

As a whole, the album seems to be a love letter to classic, fist-pumping heavy metal; if Iron Maiden and Judas Priest merged together and were reborn with some added grit and vigour you would end up with something much like Bewitcher. This record opens with an intro track which can be very hit and miss, but fortunately here it fits smoothly with the follow-on track and is not just some shoe-horned padding at the beginning. Main opener ‘Death Returns…’ gives us a glimpse of the pure heavy metal that is to come which is all gift wrapped in a crisp and punchy mix provided by Cameron Webb (Motörhead, Megadeth). Next up comes the album’s first single ‘Satanic Magick Attack’ and is one hell of a blast with racing riffs and thunderous rhythms that conjure up some nostalgic grooves. This track and the follow-on ‘Electric Phantoms’ are classic Bewitcher through and through and should delight devout followers with full on heavy metal barrage and are certainly going to be a staple of future live shows.

Moving on to another single, ‘Mystifier (White Night City)’ lets up on the accelerator only a touch, but this is where we start to see Bewitcher begin to stylise their sound a little bit with some lead guitar lines and other inflections that begin to build a more mystical and haunting atmosphere. This is where we start to see Bewitcher come into their own and not rely too much on their traditional heavy metal inspirations. Further in this direction, another single of theirs, ‘Valley of the Ravens’ expands on this broody and haunting atmosphere by instead of rapid fire riffs we get drawn out and powerful chords mixed with some cleaner guitar passages that expand the sound. Even the guitar solo on this one is mostly some cleaner and slower licks reminiscent of a laid back blues player noodling away. Both tracks mentioned here have some great dynamism and are a real stepping stone in Bewitcher’s evolution.

From here on out it is back to a good old heavy metal romp with the likes of the excellently raucous ‘Metal Burner’, a blending of brutality and mystical with ‘The Widow’s Blade’ and finally the closing heavy stomper ‘Sign of the Wolf’. Bewitcher have managed to pull off a solid helping of traditional heavy metal inspired music that is sure to get most fans riled up and energised. It is great to see them developing and expanding on their tried and true style by adding in some slight atmospheric elements that builds character and freshens up the overall album experience. Bewitcher continues to provide an excellent source of beer-raising, fist-pumping and head-banging action that I would highly recommend adding most of these tracks to your summer playlists as we can all start to celebrate going outside again!