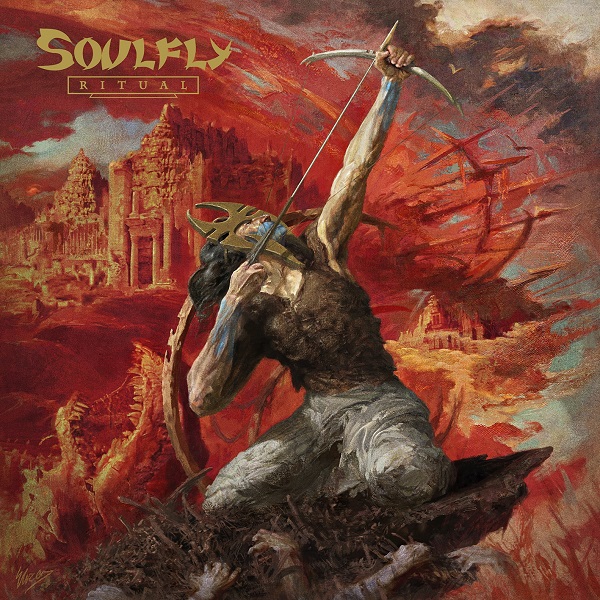 I seem to be losing track of what exactly Max Cavalera is up to. Last year we were treated to the fourth Cavalera Conspiracy record, and in the midst of talk of another Killer Be Killed album, a new Soulfly LP is on the immediate horizon. Ritual is the eleventh full length Cavalera has created for this project, and he is joined once again by longtime guitarist Marc Rizzo, Mike Leon on bass and son Zyon on drums.

A quick word Eliran Kantor’s sleeve art before we dig into the musical side Ritual. It’s another fantastic piece from the Israel born artist, who seems to knock it out of the park every time his skills are called upon. The impact cover art can have on a listener cannot be underestimated, and there’s no doubt his distinctive work is eye catching enough to draw in curious listeners. His contribution to metal this year alone has been staggering; long may it continue.

Talk in the build up to Ritual was of the album being a compromise between Cavalera’s desire to draw from his love of extreme metal, and producer Josh Wilbur’s affections for Soulfly’s groovier output. I’d say that’s probably a fair assessment of the record (but then that could be true of every Soulfly album going a fair way back), although the ratio unsurprisingly leans in Cavalera’s favour. I found this a bit disappointing, as I was looking forward to hearing some of the more tribal influenced jams that were interspersed throughout the early Soulfly material, and it’s harder to integrate that into faster paced music without sounding contrived. “Bite the Bullet” is really the only track to escape any speedy onslaughts, and is all the better for it; the well constructed Chaos AD styled crusher given space to breathe and develop of its own accord. The title track also manages to get by on its simple grooves despite some faster moments, but the song highlights one of Ritual’s biggest flaws early on: Zyon’s drumming. He’s very capable, but he can be very over eager in his playing, leading to some of his fills and beats sounding rushed and clumsy. A stodgy bass drum sound and prominence in the mix don’t help his cause, and he needs to learn to show restraint and subtlety before he can ascend into the same league as uncle Igor.

There’s two notable guests on Ritual in the form of Randy Blythe (Lamb of God) and Ross Dolan (Immolation). Both put in an excellent shift, although the fortunes of their respective tracks differ. Randy’s “Dead Behind the Eyes” is a solid number, with a swift, thrashing chug and an outstanding solo break making it one of the stronger songs. Conversely, Dolan’s imposing bellow cannot save “Under Rapture”, which crams far too many ideas into five and a half minutes. It sounds like a medley of two or three different songs, and although each respective part is good, together they just don’t work. This is a problem that crops up on a few other songs as well (“Blood on the Street” is a glaring example). Max obviously wanted all of these influences to shine through, but he couldn’t merge them in a congruent way.

On the upside, twinned mid paced thrashers “The Summoning” and “Evil Empowered” serve up some excitement in spite of some generic chugging, whilst “Feedback!”’s obvious nod to Motörhead is a welcome change of pace from the largely frantic nature of the record. The latest entry in the “Soulfly” saga is also a captivating piece, with Rizzo’s acoustic motifs pitted against some saxophone lines in a tranquil, closing instrumental. Rizzo continues to be indispensable to the group; his leads peppering songs that sometimes aren’t worthy of his playing (the zany slides and tapping frenzy of “Demonized” a particular highlight).

Soulfly have long been stuck in a rut that has seen them churning out album after album of respectable yet unimpressive groove infused thrash. I’m really not expecting Cavalera to stray too much from this norm, as I imagine he’d start up a new project for any kind of radical departure. These days, the group seem to be good for 3-4 cracking songs on an otherwise pedestrian record every other year, and Ritual is no different. Ask yourself if you like Soulfly, and that will most likely answer whether you should listen to this album.

Highlights: “The Summoning”, “Bite the Bullet”

Find out more on Soulfly here:

Ritual is available on October 19th through Nuclear Blast Records, and can be purchased here.