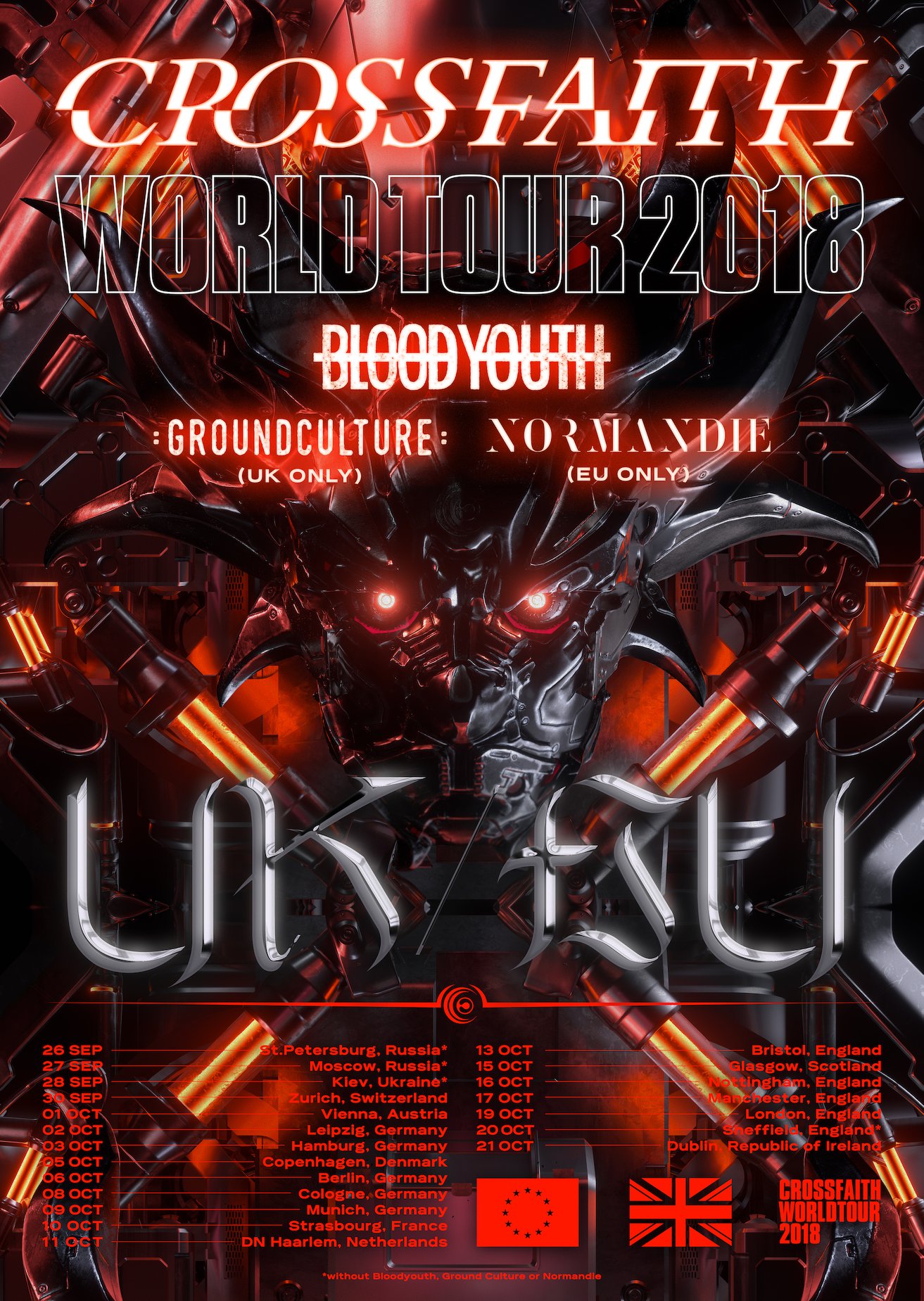 Crossfaith, bringing their unique infusion of metal and dance, were in Nottingham on the 16th (Tuesday), and I had the luxury of being able to see them live along with their support act Blood Youth. Unfortunately I didn’t manage to catch GroundCulture before Blood Youth but as I don’t want to leave you without knowing what they’re like here is a track from their latest album:

Blood Youth were on stage when I entered the Nottingham venue of Rock City but although they only had a short set of 30 minutes that was enough for them to have fun and show their fans a good time. Blood Youth are a relatively new band as they took some time to thank crowd mentioning how after only 3 years they are now playing to fans wearing their merch which to them was incredible.

Near the end of the set they decided to play a new song called “Starve” which certainly grabbed my attention away from making notes. A hard snare drum leading into a heavy beat was all the hook the crowd needed to make the song stand out from the rest of the set.

One thing that I noticed was the excessive use of bright white strobe lighting on the crowd, whilst strobe lighting is nothing new in concerts, the frequency in which it was used made me thankful I was not epileptic as it was definitely seizure inducing as the crowd moved in seeming stop motion. However, if I had to describe Blood Youth I’d say they were a standard Hardcore band in a similar vein to The Plot In You but occasionally had particularly tasty breakdowns and sounds similar to Beartooth.

Crossfaith took to the stage after a relatively brief 30 minute layover opening their set with the opening of their latest album “Ex Machina” leading straight into the first single “Catastrophe” which instigated the first of many many mosh pits for the night. The entire floor appeared to open up (which allowed me to jump to the front of the crowd) and really allowed everyone to get involved and yet somehow not be too “on top” of each other as some crowds can be.

No Crossfaith gig would be complete without the iconic cover of the classic “Omen” by The Prodigy and this gig was no exception, it brought both hardcore Crossfaith fans and new fans alike together as I saw people who I wouldn’t have expected, to mosh. It was an instant hit with crowd and brought the energy in the room from 9.9 to a 10.

The night featured many hit singles from the band which would be expected including “Jägerbomb”,”Destroyer”, and “We Are The Future”. Although through the set there were a few stand out moments, one was a classic “everyone get down” before jumping, another was making the entire crowd be silent before loudly “Cracking open a cold one” (opening a red stripe). But after all this they took the time to thank the fans for coming to the show, as all bands do, but they really put emphasis on how grateful they were, expressing the struggles of how hard it is for a Japanese band to be able to play such shows around the world. They truly believe that “music has no borders”

To “finish” off the set they performed “Daybreak”.

Incredibly after the obligatory “have we gone off stage moment” the drummer, Tatsuya Amano, returned to the stage on his own to begin playing the drums. Except instead of just doing a leading drum beat for the rest of the band to enter to, he started to drum solo for what turned out to be around 5 minutes incorporating fancy drum fills and impressive blast beats. The night finished off with the epic single “The Perfect Nightmare” and the gutturals to follow.

If you want an energetic fun night with a party atmosphere then I cannot recommend Crossfaith enough, they blend the the energy of dance music with the heaviness of metalcore. Although this blend of genres sounds unique and not like the era of music known as “Crabcore” which also infused metal and electronic music.

Recap from last night, Notts!It’s amazing to play at ROCK CITY in front of this crowd🔥 Thanks everyone who were partying with us🖤Manchester! It's your turn! Let's go nuts with us tonight!https://bnds.us/m45jta

Posted by Crossfaith on Wednesday, October 17, 2018

The concert overall was incredible so for that I rate it: