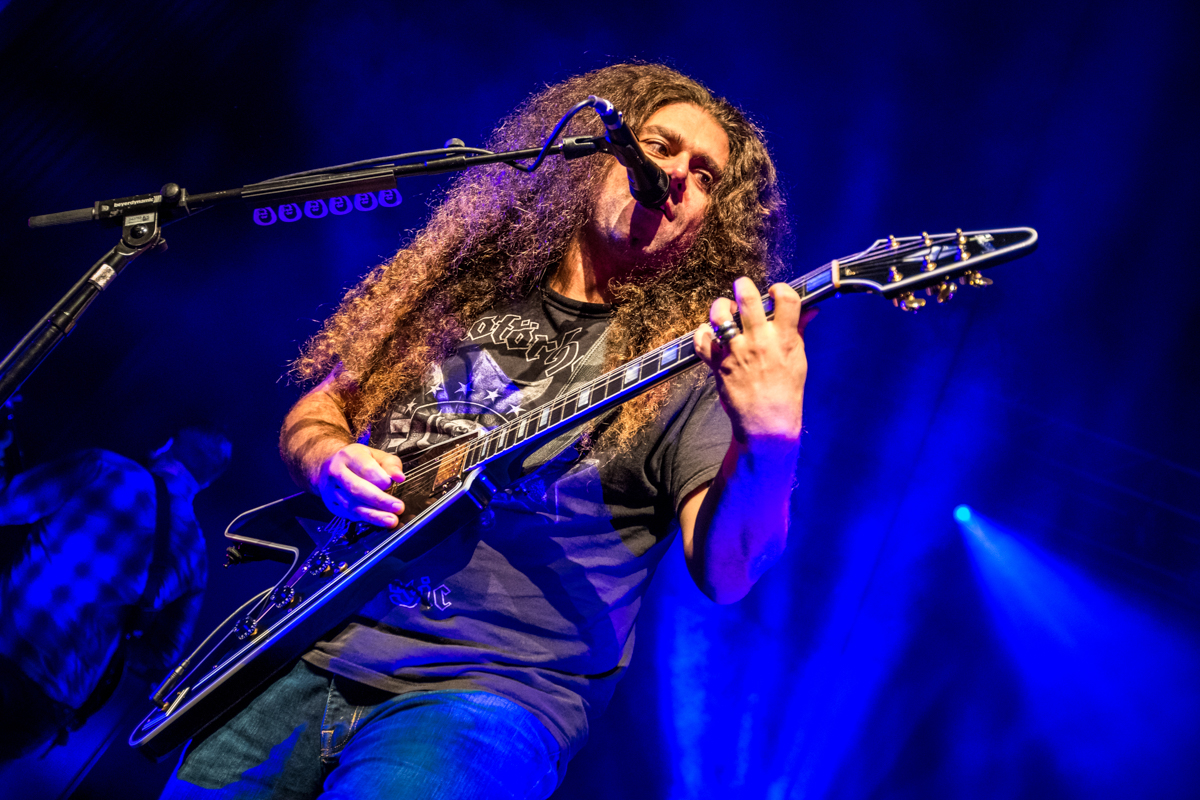 For many, the idea of filling your Sunday evening with two hours of live space-prog-rock might seem a bit daunting. But this is the stuff Coheed & Cambria fans live for. The bands’ latest release, Vaxis – Act I: The Unheavenly Creatures sees the group returning to the sci-fi epic, The Amory Wars: a world that they have been developing since their formation in the mid-nineties. I had never been to a Coheed & Cambria gig before this evening and, going in, wondered whether I would be presented with a conventional rock concert or a more immersive experience based around the album concept. The premise alone is begging for a stage show full of theatrics and visuals, beyond the standard lights and back-drop, to accompany the story telling.

However, before my curiosity could be satisfied there was opening band Chon to see. The group took to the stage with nothing in the way of fanfare and dived straight into their brand of melodious and technical music. Math-rock, jazz-rock, prog-jazz-rock-fusion…call it what you will. It boils down to four incredibly talented musicians weaving their way around a fret-board (and drum kit) with the same level of efficiency and enthusiasm that most people have when absently scrolling through their Facebook feed. Is it any good? If I was in a comfy chair with a beer and a good pair of headphones then yes, I would enjoy listening to the intricate melodies and confounding rhythm changes. But in an O2 Academy on a cold Sunday evening? Not so much. With little in the way of stage presence and audience interaction, it didn’t take more than a few songs before people started craving the main act, despite the incredible level of technical prowess on display.

It took a single note from the opening Prologue of Unheavenly Creatures to elicit a roar from the crowd (alongside the inevitable raising of a sea of phones. It seems you may as well have not bothered going to the gig if it isn’t made official on your social media…). It says a lot about the dedication of Coheed fans than the reaction to newer songs from an album that has only been out just over a week is nearly on par with the reaction to older classics. There are exceptions of course. In Keeping Secrets of Silent Earth: 3 prompted mass hysteria and the first most-pit after several songs of the crowd being fairly static. There was a similar reaction to songs such as Ten Speed (Of God’s Blood & Burial) and A Favour House Atlantic. The running theme with all the songs is the masterful combination of more progressive riffs and rhythms with ridiculously catchy sing-along moments, of which there of course several. Some were in songs already mentioned, although to me the most memorable was during the performance of recent single The Gutter as there is something weirdly comical about a large group of rock fans shouting “CALL YOUR MOTHER” at the end of a chorus. Not that the band required the help of the crowd with any of the singing. Claudio Sanchez’ vocals were note perfect, and he made singing while playing intricate guitar rhythms look effortless. Ironically, the only time the vocals slipped a little was when he didn’t have a guitar in hand and some of the singing got lost while he was wind-milling around the stage. Speaking of the stage, I was a little disappointed at the lack of decoration and props (although with an Iron Maiden show still a recent memory I may have had unrealistic expectations). The light show was incredible and perfectly suited the changing mood and tone of many of the tracks, but I still feel a more elaborate stage show could take the story telling to the next level. This is a minor point though as the music more than spoke for itself, as did the bands’ performance, with all four members, especially Sanchez, all clearly enjoying themselves. Encores are a little but of a farce these days as they are expected and built into set times, but it is still good to hear genuine appreciation from a crowd who want to hear more. Saying that, when you deny your audience a favourite like Welcome Home during the main set you pretty much guarantee an encore either way.

You may have guessed from my admittance that this was my first Coheed & Cambria gig that I was only a casual fan of the band. I’m kicking myself for that now. The band seem to have found a niche point between catchiness and technicality, both musically and lyrically, that makes their music both unique and accessible. I am aware that for many rock fans I am probably preaching to the choir with this praise, but take it as a good omen that this many years (and albums) down the line, the live performance of Coheed & Cambria can still inspire and excite new fans. Now, if you’ll excuse me, I have an extensive back catalogue to explore.