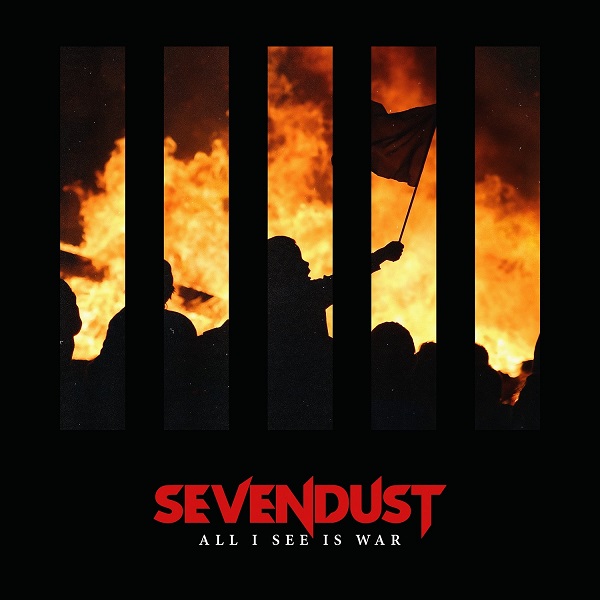 Time has not been kind to many of the alt/nu-metal bands that emerged during the genre’s heyday around the turn of the century. Sevendust are one of the most enduring acts from the scene, having managed to maintain a steady fanbase and a relatively stable line up. This stability is likely a reason for their longevity, with their latest album, All I See Is War, the 11th full length of their career.

Like much of their work, All I See Is War strikes a balance between hard hitting abrasion and soothing tranquillity. Guitar duo Clint Lowery and John Connolly, as well as frontman Lajon Witherspoon, prove that they are more than capable of pulling off this approach, with many moments of perfect poise between the two scattered throughout the record. Morgan Rose underpins this with an accomplished drum performance, with some interesting beats full of little nuances and subtleties.

All sounds good, right? Well, ‘good’ is perhaps the apt word here, as quality wise, that’s as far as the album goes; conversely, it never stoops below middling territory. The biggest issue is there is very little memorability to a sizeable portion of the material. There are some great ideas of course, such as the mammoth, grinding riff that opens “God Bites His Tongue”, the contrast between piano and guitars in “Moments” and the dense, dynamic textures of “Unforgiven”, but they are few and far between, strung together by numerous forgettable sections. There’s a tendency to fall into a safe, familiar groove, particularly with a lot of the choruses – many of which tread similar ground, making them feel interchangeable. This is most apparent with the late album lull encompassed by “Not Original”, “Descend” and “Life Deceives You”, all of which offer little to excite the listener. “The Truth” does close things on a high note, with a heavy stomp that won’t fail to incite movement in the pit.

There’s not a lack of effort though. Whilst there are too few riffs that are capable of carrying a song, some of the more melodic work from the Lowery and Connolly fares better. Rose’s aforementioned drumming is of a high quality, whilst Witherspoon continues to justify his status as one of the most underrated vocalists in the genre, with a rich, emotive croon interspersed with some commanding, grittier diatribes. There is an air of positivity about much of his singing, giving the album a positive energy, even at its bleakest. The flaw is there appears to be a reluctance from anyone to grab these songs by the scruff of the neck and really take lead, leaving many of them lacking that little spark that’d make them better.

I don’t want to sound like I’m too down on All I See Is War. It’s far from a bad effort, but there’s little on offer that will make it stand out from the pack, either in relation to Sevendust’s discography or the scene as a whole. I’m sure fans will enjoy it, but the appeal may not go further than that.

All I See Is War is available on May 11th via Rise Records, and can be purchased here.