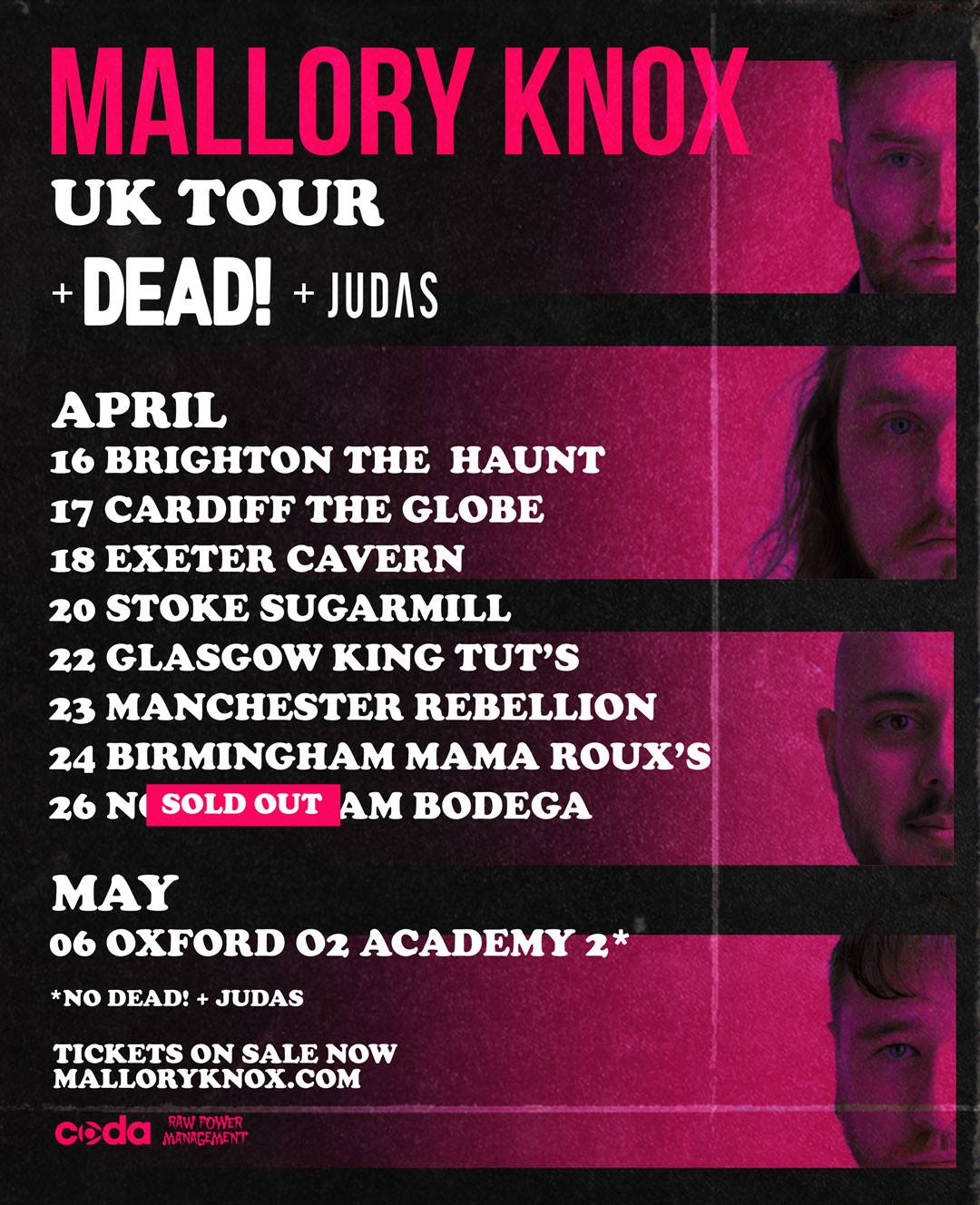 On a tepid April evening I ventured out into the big city of Birmingham only to find myself transported to New Orleans, okay, maybe that was exaggerated. What did happen though was I ventured into Birmingham city centre to the small intimate venue of Mama Roux’s, which has a New Orleans theme. On stage that night was the band Mallory Knox, heading out on their first tour since the departure of previous front man Mikey Chapman.

Sharing the stage with Mallory Knox that night were two bands, Judas and Dead!

Unfortunately I did not manage to catch Judas live, but like the good guy I am I checked them out online so I can still give you my opinion of them. I spoke to a friend of mine who was at the concert and she said Judas are “trying to sound like something that they’re not”. After listening to them I can agree, they have a very strong indie vibe, which will be popular amongst many people, however, I couldn’t help but feel there wasn’t a lot of depth to the music. With the current wave of indie music that is being released with the likes of Pale Waves and Blossoms I am unsure where their place in the scene will be. Maybe they’ll take off or maybe they’ll be lost in the sea of small indie bands.

See for yourself though with their current single: Big Mouth

Moving on to the second act of the night which I actually did manage to see, Dead! The easiest way I can describe Dead! to those that may not be aware of the band is to think of other bands such as Slaves (UK). The overall new wave punk vibe carries heavily throughout the fast paced 30/40 minute set. Almost no talking took place between songs other than to introduce the title of the following song. One thing can be said though, for a support band, there was plenty of action from the crowd; many people were moshing and jumping around, something that I don’t see too often from support artists. Overall I feel that if 90’s-esque London Punk is something you enjoy then Dead! would be for you!

Finally to the main act, after a 45-minute layover, Mallory Knox took to the stage amongst the glow of green lights. Ultimately I feel the green lights were there to contrast the neon pink around their Marshall amps, which was a nice extremely simple touch of stage design.

Opening up the set was Black Holes, the first latest single released, and ultimately the first single since the departure of Mikey Chapman. The crowd enjoyed Black Holes but really decided to get involved once the debut album single Beggars was played live. This staple track of Mallory Knox brought on impromptu clap-alongs and plenty of audience participation, such as belting out “mind” in the later pre-chorus.

Two new songs were premiered on the tour, around five songs into the set the first new unreleased song was played. I didn’t catch the name of the song irritatingly but I have a feeling it may be called Psycho considering it’s mentioned multiple times throughout the chorus. After a heavy intro, which I personally will hope translate to the album, a further 80’s-esque guitar solo was unveiled which hasn’t really been heard on any other Mallory Knox Tracks.

The second track was revealed after announcing their separation from their previous record label and signing on to a new company. The intro riff reminded me heavily of the song Apply Some Pressure by Maximo Park except tuned down. Overall the track didn’t stand out as much as some of their other songs and I’m not sure how well it will be received, however, I would love to be proved wrong if it features on the upcoming album.

From around the two-thirds mark Sam (now lead singer and bass player) took a multiple moments to address the crowd and thank them for their continued support. Sam mentioned how a few months prior to the tour they were unsure if they were able to continue as a band, without explicitly mentioning specifics it was pretty obvious they were addressing the departure of Mikey. During these moments with the crowd Sam began to talk about how he suffers with anxiety, especially now being the front man of the band. Admitting this was further emphasised by the fact that throughout the set Sam promised that his voice would get better; even though it was expressed through comedic tones it clearly showed an insecurity. Ultimately this segued into the song Mother being dedicated to Sam’s parents who were at the show.

After an hour it was time to close off the show with the track Better Off Without You. The set list consisted of songs from all the albums and even their initial debut EP release (No it wasn’t Oceans – Sam stated it wouldn’t be the track you think it’d be). One thing was evident though to me, the earlier tracks granted more response from the crowd, obviously not to the point of the crowd being dead though.

It’d be hard to write a review without mentioning how Sam handled the vocals for the first time. I can honestly say though that he did an amazing job of recreating the same sound that fans were familiar with hearing on the albums. I am unsure though whether this was intentional or not though, I guess only time will tell whether this is a sound he and the band enjoy or whether it was more fan service.

To conclude I would say the show reminded me of Netflix series depicting a millennial local rock concert, a very cliché vibe was apparent. The crowd bobbing around in front of a well lit band underneath hanging stringed lights strewn from wall to wall. The only thing missing from the whole scenario was an underlying love story subplot amongst the band and a girl in the crowd. However, that description aside, the show was extremely enjoyable and I am interested to see what will come next from Mallory Knox. If you were unsure about seeing them live on this tour I can say you should have, the band line up did not change how they played or even sounded on stage.

For the sheer fact it was great to hear Mallory Knox play live again I would give the gig: