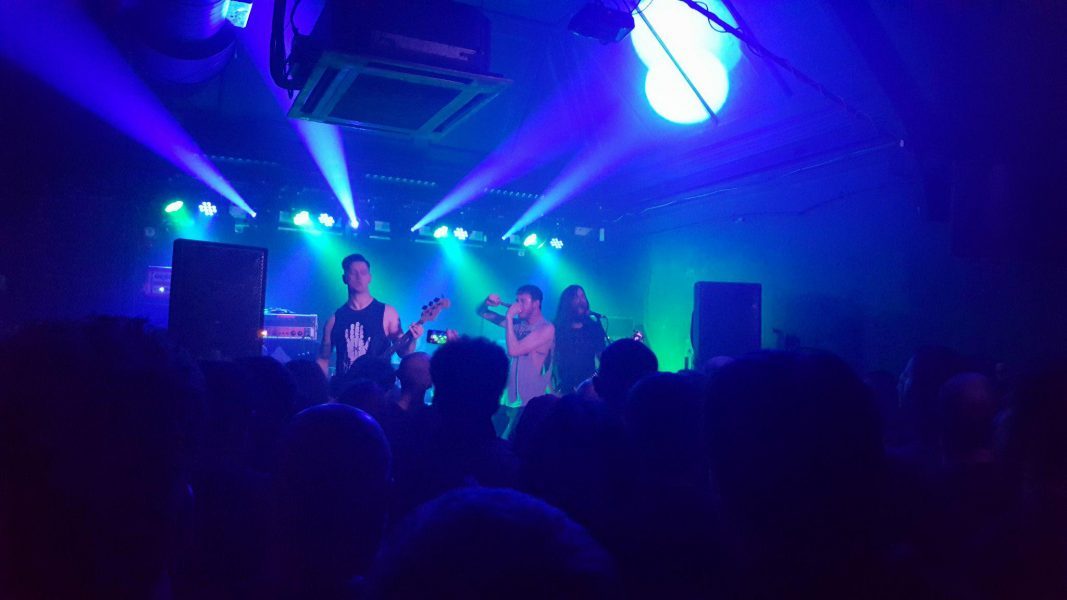 Following the release of the brilliant Braille, Palm Reader’s album release show is a showcase of exciting, British heavy music. Booking the much-discussed Conjurer as main support was a brilliant move. Having Palm Reader acting in the role of the established band giving a shot to the young bloods in Conjurer gave a palpable sense of excitement in the tiny, sweatbox atmosphere of Bodega. But before that all started were Scottish, post-hardcore outfit Toy Mountains.

Toy Mountains had a lot riding on them opening this spectacular bill, and they pulled it off really well. Interspersing angular, complex, heavy riffing with more atmospheric, progressive, melodic sections. Sadly, the drums over powered some of the riffing and interesting guitar leads. However, the band put on a hugely energetic performance when they went heavy and letting the atmospheric sections speak for themselves. The use of a three-pronged vocal approach was interesting, but the harmonies didn’t quite come across as well as one might have hoped. This band have real potential, but their song writing approach seems to be throwing everything but the kitchen sink at a song. They can’t quite pull off that complexity yet, they’d really benefit from focussing on fewer aspects of their sound at a higher standard, then adding more on future releases. All in all, a really solid opening act with real potential. Definitely ones to watch.

Conjurer’s debut album Mire has been causing a lot of buzz even outside of extreme metal circles, and for good reason. Live it’s even better. I felt as though I was drowning in a quagmire of heavy, doomy riffs. Even when they picked up the pace the overall feel was all encompassing and crushing. Despite having and absolute beast of a drummer, the sound problems that cause Toy Mountains so much of a problem were completely absent. On the subject of the drumming, it felt like a masterclass. From that grindcore-esque snare at the beginning of Wretch to the insane fills spaced throughout every single song, it was breath taking and almost became the focus at times. Often when bands play live, synchronised headbanging can look staged and forced but the sheer power of the drums and riffing as well as the overwhelming atmosphere made it seem like the most natural thing in the world. Full of energy and passion, Conjurer put on a masterclass of extreme metal and on any other night would have comfortably walked away as The band of the night.

But Palm Reader were headlining. Braille is a breath taking record and the songs from it sounded absolutely brilliant live. The band were super energised as was the crowd. With not barrier in front of the stage, it was easy for a couple of stage divers to get going and the rest of crowd were also going completely mental in the best way possible. The vocals were fantastic, filled with emotion and fragility, but never becoming soppy in anyway. Instrumentally the band were super tight, and every detail came across well in the mix. The brief moments of chatter between songs were short, amusing and didn’t disrupt the flow of some of the best hardcore songs on the planet. I’ve previously said that Employed To Serve are the best hardcore band in the UK right now, but Palm Reader are putting up a serious fight for it. If Every Time I Die can headline Rescue Rooms I see no reason the Palm Reader shouldn’t be able to, simply based on the quality of their music and live show. To put it simply, you should go and support Palm Reader whenever they’re next near you. This band are really doing great things and we need to support the best bands right now.

Palm Reader are playing shows in the UK throughout May, July and August.