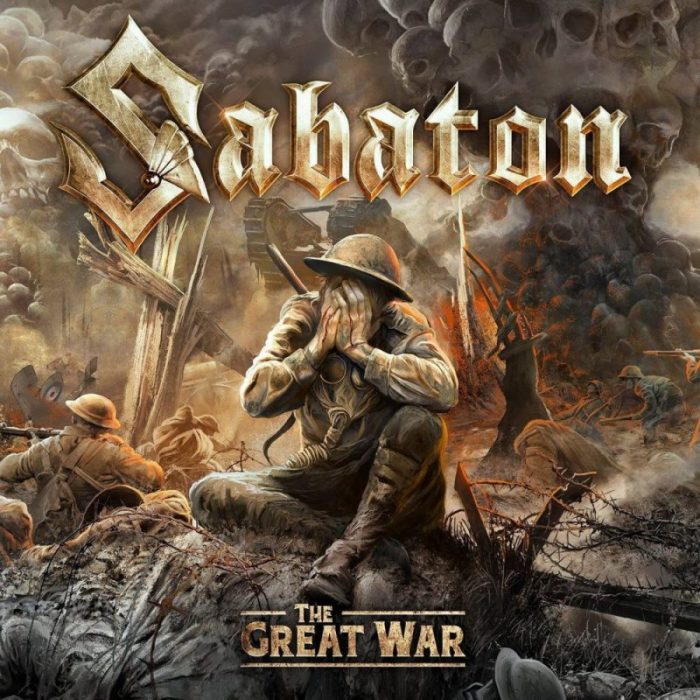 2019. The twentieth anniversary of Sabaton and a one hundred year milestone since the signing of the Treaty of Versailles after World War One. Combining these two elements Sabaton have returned with their ninth studio effort, a conceptual album that tackles one of the deadliest conflicts in history where millions sacrificed their lives in courageous defence of their country.

So, no pressure then.

Fans of their back catalogue of various tales of WW1 and their first conceptual album Carolus Rex will be undoubtedly delighted and rubbing their hands with glee at this monstrous task that the band has undergone. And similarly to Carolus Rex there’s that same level of bombastic power. This time however it’s either elevated, subdued or simply flattened throughout.

The Great War opens with The Future of Warfare, staccato riffs and synths immediately giving a militaristic vibe that propels in adjacent to the lyrical content of the premier usage of tanks on the battlefield. Vocalist Joakim Brodén immediately sets the scene of “a desolate wasteland, inferno depiction of hell.” This is 1916, inhumanity spreading across once flourishing fields that are now transformed into a place of carnage. Musically the riffs and bridge sound like the onslaught of the relentless firing of guns, a clever method that harks back to the days of Metallica’s One. Sabaton have crafted and deployed this technique throughout the years and it works superbly as a sonic enhancer to the intense images of warfare. The synths add another depth to this level of intensity despite their cheesy 80’s connotations. This perfectly encapsulates Sabaton as a whole as they blend the lines of severity with pure unabashed silliness.

The following two tracks are initially rather nondescript but begin to possess a subtle shine after several listens. Seven Pillars of Wisdom follows the classic Sabaton formula of uplifting power metal riffs with a guitar solo that beautifully combines speed and melody. 82 and All the Way begins with a brief and menacing synth before being abruptly interrupted by a riff that sounds far too happy for its own good. It’s undeniably catchy and works well as a simplistic celebration of Alvin York (aka Sergeant York) who was one of the most decorated war heroes in WW1.

The Attack of the Dead Men has a wonderfully deep and melodic chorus with a pace that conjures up depictions of marching. There’s a particularly beautiful slow break from this tempo where the guitars duel and provide a gentle melody with the bass refreshingly audible.

Devil Dogs opens in the same immediate urgency like classic Sabaton tracks such as Aces in Exile from 2010’s Coat of Arms. Again it’s another catchy track that’s pretty standard for Sabaton. Yet there’s an interesting shift in the middle with Brodén embracing a Sergeant-esque interrogative of “c’mon you sons of bitches, do you wanna live forever?” before immediately transferring into another guitar solo that compliments the tribal like drums from Hannes Van Dahl. Naff? Yes. Completely smile inducing and 100% Sabaton? Absolutely.

Focusing on the dreaded German fighter pilot Manfred von Richthofen, The Red Baron opens with an organ segment that wouldn’t be out of place on a Ghost album. This usage of instruments and sounds that are more predominantly attached to other genres is reminiscent of the spaghetti Western opening to one of Sabaton’s most beloved live tracks, To Hell and Back. This level of openness and diversity similarly makes The Red Baron one of the stand out tracks on The Great War. Besides from the organ inducing thoughts of Deep Purple and Scooby Doo, the verse follows a high speed vocal line from Brodén intensified in drama through the addition of a choir. It’s a brilliant song and certainly more memorable than others.

However the full bombastic potential of Sabaton truly ignites on the title track itself. The Great War has a definite Carolus Rex vibe, arguably on the same level or even surpassing. With heavy and palm muted riffs in the verse to elevate Brodén’s powerful vocals, more emotion is injected prior to the outstanding chorus that could be mistaken for a film soundtrack. It’s a truly fantastic and emotive piece that certainly does not trivialise or undermine the sheer significance and tragedy that WW1 inflicted on millions. Sabaton have divided opinion in the way in which they transform war into an art form with some arguing that it’s exploitative for profit and fame. However with particular songs like The Great War, it’s clear that Sabaton craft their material with complete respect and research in order to keep these tales of war and the individuals involved alive. As a result, The Great War is a beautiful and powerful testament to one of the most devastating man made tragedies in history.

A Ghost in the Trenches comes as a sharp anti climax. It’s rather alarming to shift back to drowning in pure cheese after experiencing the goose-bump worthy masterpiece of the title track. Although this is Sabaton after all so it’s to be expected. Fields of Verdun follows in the same vein with a straightforward chorus of “Nowhere to run, Father and Son, Fall one by one, Fields of Verdun.” Catchy yet inevitably lacking in poetic significance, at least it’ll be the perfect sing-along track when performed live.

Enticing the listen in for a slow and moving ballad, The End of the War to End all Wars opens with a gentle piano piece accompanied by violin. And then the biggest plot twist of the album unfolds. With no warning the song explodes into riffs, keyboards and a choir evoking opera worthy drama. It’s complete schizophrenic madness yet it somehow blends together perfectly. This is nothing quite like what Sabaton have devised before as they’ve taken every bombastic element of power metal and combined it with the notoriously dramatic genre of symphonic metal. Quite simply it sounds like Nightwish on steroids. Brodéns voice sounds incredible, low and menacing throughout. The middle section is particularly unique with sounding like a film score taken straight out of a Pirates of the Caribbean battle scene. It’s completely mind blowing to the very end, a truly distinctive and frantically replayable piece that is guaranteed to shock the hell out of first time listeners.

Such an explosive track seems like the perfect end to an album which has dipped up and down like a restless wave. However Sabaton brings the action packed drama down to a raw and richly human level with the beautiful rendition of In Flanders Fields. Originally a war poem by Lieutenant Colonel John McCrae, Sabaton’s version follows the haunting and touching melody of a women’s choir with no musical accompaniment. It’s a moving tribute and perhaps the most respectful way to conclude an album that journeys through sacrifice and tragic loss at the hands of 20th century warfare.

As a whole, The Great War is a definite bloomer. There are tracks that grab the listener immediately and throughout like The Future of Warfare, The Great War and the mouthful of a title The End of the War to End All Wars. Others such as Seven Pillars of Wisdom and 82 and All the Way require a few more listens to develop some appreciation of the music they’re offering. Or perhaps they’re just simply more skippable than others. The ones that are destined to be religiously replayed whilst blossoming into staples of the future live sets.

Sabaton and their brand of heavy metal is undoubtedly a unique and admirable beast. Through keeping these stories alive the band are educating their listeners in the best way possible. It’s clear that Sabaton care about representing these stories in the most factual way possible, to the point of recently creating their own history channel on YouTube.  Despite a few near misses, The Great War is another impressive chapter in their vast collection of war tales, an album that is sure to boost their rapidly growing status as modern metal titans.

Highlights: The Future of Warfare, The Great War, The Red Baron, The End of the War to End All Wars.

Sabaton are a part of Nuclear Blast Records.

For those rabid history enthusiasts, Sabaton’s history channel can also be found here.