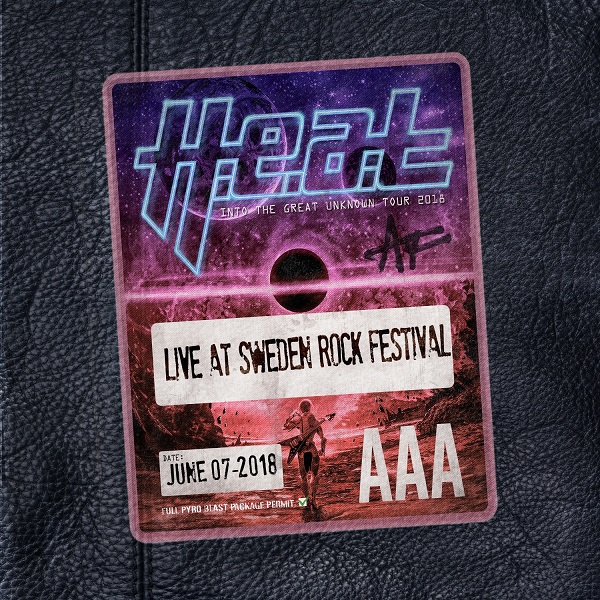 Swedish hard rock sensations H.e.a.t have come a long way in the last decade or so, and their appearance at Sweden Rock in 2018 consolidated their ascent to the top of their field. The acquisition of Swedish Idol winner Erik Grönwall back in 2010 was something of a masterstroke, and the catalyst that really shot them to the forefront of the melodic rock scene. Although his vocals aren’t technically as good as those of predecessor Kenny Leckremo, his charisma and attitude make him an incredibly enthralling frontman, and have given the band the confidence to really develop and broaden their musical horizons. He also enabled them to become a formidable live package, something that is evident on their second concert release, Live at Sweden Rock Festival.

The 13 song set draws from the group’s entire back catalogue, but largely focuses on the Grönwall era, with only two tracks from the Leckremo era. This is a wise choice, as from personal experience, I’ve always felt Grönwall struggles a little on the Leckremo material. Whilst he can certainly carry the tunes well enough, he sounds quite awkward on some of the vocal lines, which really miss Leckremo’s cadence and honey soaked timbre. He is definitely more comfortable on his own material, and putting every fibre of his being into each word. This comes at a cost, as his delivery can be a little rough around the edges (particularly towards the end of the show), but this gives the record that live essence that are part of the appeal of a concert release. I also imagine Grönwall’s on stage antics play their part, and although I haven’t seen the video part of this show, I know from seeing H.e.a.t myself that he is an absolute livewire on stage, and there’s no way you can do what he does whilst keeping vocals 100% on point. Again, you weigh up the costs and benefits, and his stage presence is one of H.e.a.t’s major strengths, so a minor detriment to his singing is an acceptable loss in my eyes.

I do have to question the choice to release a live album so soon after 2015’s Live in London. Whilst we do get four cuts from the latest record (2017’s lacklustre Into the Great Unknown, although they have picked many of the stronger songs for the set), a lot of what you hear on this album is also available on its superior predecessor. I will never complain about sublime, hook laden anthems such as “Emergency” and “Inferno”, rousing singalongs like “Tearing Down the Walls”,  or an effective closing one two punch like “Living on the Run” and “A Shot at Redemption”, but with a catalogue only five albums deep, I’m not sure H.e.a.t are yet in a position to be frequently issuing live releases, especially given how similar it is to the last one. I suppose this is the first chance they’ve put out a pro shot live video, and perhaps they were just taking advance of festival equipment, but I’m not sure that’s enough justification.

With that said, there isn’t really much wrong with the record. The band are on point as always, Grönwall gives his all, and there’s a good energy and flow to the show. You have to wonder how necessary a release this is, but I imagine it’s pretty much aimed at the group’s fan base anyway, who usually make up a significant chunk of sales of these sorts of things these days. One that fans will undoubtedly enjoy, but if you’re new to H.e.a.t, I’d suggest a couple of their studio albums first if you want a better representation of their songs.

Live at Sweden Rock Festival is available on July 26th via earMUSIC, and can be purchased here.