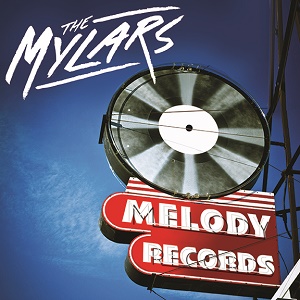 The Mylars describe their music as ‘all American rock ‘n’ roll to warm your heart’ and define themselves as a super charged outfit founded by vocalist/guitarist Danny Roselle and long-time collaborator, vocalist/bassist Quig. Also accompanied by Chris O’Hara on drums, Dan ‘Nashville’ Rainey on lead guitar, and Nick Polito-Hammond on Piano. With a band mission of “It is what it used to be”, The Mylars are a concoction of some of the best 70’s sounds mixed with mild elements of melodic pop/rock, and a modern twist.

Their album Melody Records was released on 15th September 2017 and is a testament to their hard work ethic. It is full of feel good songs that beckon to you to join in, and having two vocalists in the band, means that there is diversity to their sound. Although The Mylars haven’t yet visited the UK, I think we should get to know them a little better, as their album most certainly put a smile on my face as I’m sure it will do to yours.

I was lucky enough to catch up with Danny Roselle who let me in on a bit of the history of The Mylars and this is what he had to say:

“As you could imagine our songs mean everything to us. Every single one of these tracks has a personal back story. I could go on all night, haha. First I’m going to give you the backstory on our debut single, ‘Forever Done’ that I sing and wrote the lyrics on. The reason I want to talk about Forever Done is because it is the actual backstory of The Mylars, and the members of The Mylars. It is our story in a very true sense. I wanted to write a sort of underdog anthem for the band and this one is it. All of the members in The Mylars have been in numerous bands throughout the years, many of which have come very close to what we would consider the brass ring. I’ve probably showcased for major labels a dozen times myself. So close you could taste it, and then nothing. Forever Done is the big ‘Fuck You’ to everyone who counted us out a million times. It’s the song that says, Hey!! Here we are still standing. A lot of the major labels are folding, the entire record industry is on its heels. Because of social media, the playing field has totally evened itself out in favour of the independent artist, and guess what? We’re still standing here, fighting and believing. The line, ‘You are mine, I’m yours, Forever Done’ is basically saying that each of us is stuck together by luck, fate, and everything else good that goes along with it. At the same time it’s saying that we as a group are one in the same with this crazy wonderful life we’ve built up around us. Not because it’s what we do, but because it’s who we are. The Mylars is our big chance to do things our way, and not take one single day or one single show for granted. It’s a song about strength, it’s a song about survival, and it’s the song about The Mylars.”

Now that you have their backstory, why don’t you take a look at these guys in action? Below is the video to Forever Done, take a look:

The album is an all American journey through years of rock n roll. In parts it has some great smooth rock qualities, and in others it has more of a funky pop/rock vibe. The Mylars have clearly put their heart and soul into creating this work, which has firmly stamped their names into the book of rock n roll. Whilst I cannot seem to suggest a British equivalent to these guys, I would say that this is more of a reason to have a listen to them. My favourite tracks on the album are Forever Done, 12 minutes and Betty Buddy and me.

The guitar riff at the beginning of Betty, Buddy and Me will certainly get you bopping around. This enjoyable musical encounter is hands down my favourite track of the album. It’s such a lively tune which is pumped full of good vibes, energy and life. A great sounding song reminiscent of the 70’s pop rock, but with a modern kick to it. Lyrics such as ‘With the radio up and the windows down, ease the seat back, tip my hat as we drive through this old town, white lines are all we see, today it’s just us three, oooh Betty Buddy and Me’ it certainly sends the mind off on a journey of good times. Here’s what Danny and Quig had to say about the song:

Danny: “The second song we’d like to discuss is the song Betty, Buddy and Me. It’s a song sung by my bass player and musical partner for many years, Quig who also penned the lyrics.”

Quig: “One early Sunday morning I was driving on Route 22 in our hometown of Union, New Jersey after getting my morning coffee. I pulled up to a traffic light next to a guy in a red 57 Chevy. He just looked so relaxed to me. When he saw me looking over at him, he nodded and then drove off when the light turned green. I thought to myself, I wonder what his story is, because there is definitely a song here. It took a few weeks of rolling around in my head, but it almost felt like the meat of the song wrote itself. His life story through my eyes.”

12 Minutes is one of those tracks that if you don’t find yourself singing along to it you may question whether there is something wrong with you. I found the lyrics quite intriguing so I asked Danny to explain the story behind the song. Here’s what he said:

“That’s one of the funnier encounters ever put to music so yeah, here it goes……A few years back I received a message through our management in regards to this big fan who was interested in hiring us to play her birthday party. As it was put to me, this girl is truly one of your biggest fans and she would just love it if you would play the party. Being completely flattered I said without hesitation that we would, and then plans were made for us to speak to lay out the details of the party. The following day I phoned her up to get my daily dose of ego stroking and to plan our world take-over of the birthday scene, only to be greeted with, “I am your biggest fan but I was wondering if for my party can you possibly play all Nickelback songs?”. I stared at the phone in disbelief for what seemed like a lifetime, and then after regaining some type of composure asked her “how much money was she offering?, haha…As you can imagine, we were so broke at the time that even a few hundred bucks was worth playing songs from a band that I truly disliked. Sorry Chad.

So the whole song is based on my willingness to sell my soul for a few bucks. I guess Nickelback really got the last laugh because just as the song details, pulling down the road after the gig feeling good and filthy, guess who comes on the radio. Fuck me.”

I can now enjoy 12 minutes knowing the backstory, and sing along with a smirk on my face!

In summary, here we have 5 guys who have worked hard within the music industry over the years, and they have survived some tough times together. Now after all their hard work, they have this fantastic feel good album to show off to the world of rock ‘n’ roll, and I feel that it should be received extremely well in America. Whilst I’m aware that they haven’t visited the UK as yet, I’m certain that they will have a following over here, and I strongly urge people to have a listen to them. I would class their music style as varied, due to some tracks such as Betty Buddy and me, 12 Minutes and Home to You being an American pop/rock sound, and then other tracks such as Let’s Go, Wake Up Virginia and What Do You Got To Lose having a weightier sound which shows the band dipping their toes into a more classic/alternative rock genre. Whichever way you categorise their music, it has its own Mylars twist to it.

I would like to thank Danny Roselle and Quig for sharing some stories with me for this review, and I wish the band all the best with their album and for the future.

Highlight: “An all American journey through years of rock ‘n’ roll”