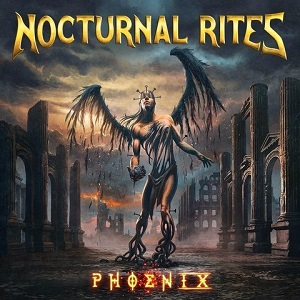 Nocturnal Rites were quite a notable act in the power metal scene around the turn of the century, conjuring up eight full length records after initially starting as a death metal group. The final album of that run, the aptly dubbed The 8th Sin, was not well received, and the band ultimately left the limelight. Ten years on, the Swedish five piece are looking to return and rise from the ashes like the titular creature of their new album, Phoenix.

Nocturnal Rites aren’t trying anything fancy or taking any risks with their comeback here. They opt for a guitar centric Euro power sound, with a big focus on dense, muscular riffs and memorable choruses. There’s still a fair amount of melody and keyboard work throughout the record, but there’s no doubting the group wanted the six string action of Fredrik Mannberg and new lead player Per Nilsson in the thick of the action (perhaps in response to criticism that the preceding album sounded too weak). Jonny Lindqvist’s vocal prowess is also wisely given prominence; his velvety croon possessing just enough grit to match the bombardment of riffs on offer.

Unsurprisingly, the song structures themselves fall in line with the simple, to the point heavy / power sound Nocturnal Rites has gone for. This works as both a blessing and a curse for the group. When they get it right, the songs are exciting and wonderfully engaging. On the other hand, when they’re lacking, there’s very little for them to fall back on, which sadly leads to quite a few forgettable moments on the album (“A Song for You” and “The Ghost Inside Me” being two such examples). This is when Lindqvist’s superb voice comes into play, as there are occasions when his performance helps cover up some shortcomings in the song writing department. This is mostly apparent in some of the sparsely populated verses, which can come across as mere filler sections to build up to the inevitable rousing refrain. His voice is not be the most distinctive or unique you’ll hear in the genre, but the quality and passion he breathes into the songs gives the material an added emotional depth that greatly benefits the record. The decade long lay off between albums has certainly done him no harm, and even at 52, he commands the sort of presence and vigour that some singers half his age could only dream of.

As noted, there’s the the odd lapse in song writing to be found, but the highs are pretty damn high. From the off, “A Heart As Black As Coal” wastes no time going full throttle, with a groove laden main riff and probing guitar stabs in the verse setting up for the catchy chorus. As far as openers go, it does the job well enough, but is soon one upped by the mid tempo “Before We Waste Away”, one of the most melodically inclined tracks on offer. The rock orientated leanings of “Nothing Can Break Me” certainly don’t prove a hindrance; another highly melodic number featuring some wonderful integration of keys into the instrumental playground. “Flames” is one of the more interesting songs (if not one of the stronger ones), with the musical landscape shifting around a keyboard motif played pretty much on loop throughout the track’s duration, whilst “Welcome to the End” is the pick of the double bass driven cuts, closing the album in suitably bombastic fashion.

Although there are some misfires on the song front, I think Nocturnal Rites do just about enough with Phoenix. There’s no twists, turns, surprise tempo changes, lengthy epics or jaw dropping instrumental magic, but I doubt anyone familiar with the band would’ve been expecting them to break new ground anyway. It may not be the remarkable return that fans would’ve been hoping for, but I feel there’s plenty here to satisfy those that have been clamouring for this album for some time.

Phoenix is available worldwide on September 29th via AFM Records, and can be purchased here.