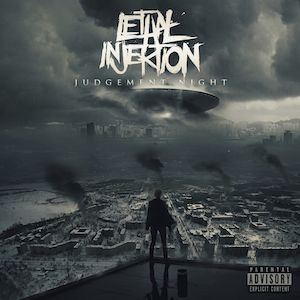 There’s always a gap in the market for a new rap metal band.  The main reason being, that as music projects go, it’s about as difficult as it gets to achieve authenticity while also producing a marketable sound.  Though race doesn’t dictate the music you enjoy, with the foundation of rap firmly within black culture and the predominance of white culture within the metal genre, it is very difficult to combine the two in a way that genuinely and sensitively embraces both backgrounds.  As a result, both the rap and metal areas mustn’t just be comparable to everyday artists, but the best in their genre, in order to be taken seriously.  Well it’s quite the task, but are Lethal Injektion up to it with their latest album, Judgement Night?

First observations of the band are promising.  Despite the image very much of a metal band, the calibre and background of rapper Jacob Ryan (AKA The Raskal) in the hip hop scene does bring with it a certain credibility.  It’s very clear early on that the tempo and feel is very much inspired by classic hip hop, rather than more modern and increasingly popular grime sub-genre.  However, the well-executed, rhythmical lyrics suit the songs perfectly.

It’s too easy with bands of this type to make a comparison to Linkin Park, but, in all honesty, the musicianship of Lethal Injektion is far superior.  This is immediately apparent as the first track, Blinding Light, includes a complex guitar solo and the drums in second track, Let’s Get It, are a real step up, with some complex beats and good double kick work.  Perhaps the synth parts in some tracks, though a nice foundation, lack a bit of fizz and sparkle, but this doesn’t detract from the overall sound.

The early tracks are very much focussed towards making hard-hitting metal tracks.  Driving guitars and the predominance of sung vocals is very reminiscent of tracks where guest rappers are the featured artist.  However, as the album progresses, the hip hop influence starts to take over and in some tracks, for example Unwind, it’s like the reverse with the sung vocal seemingly the feature.  This allows for the rap content to be even deeper and more poetic, which is a development as the album progresses.  There is also a pleasant contrast in Unwind, with an offbeat clean guitar feel.  It is the most gentle track on the album, but also one of the best.  It just sticks with you as something a little bit special.

The record is an album with lots of contrast, although the flow of the album really works and maintains interest from start to finish.  It also has to be noted that there are sixteen (yes sixteen!!) tracks on this album.  That’s a lot of lyrical content to accumulate and none of them are lacking substance.  The big question is, has the most difficult of tasks been successfully negotiated?  In a word, yes.  The integrity of both the rap and metal genres is there, as is the quality.  I may not be an expert on the subject, but it all just sounds so cool.  I would go as far as to say Judgement Night is easily the coolest album of the year and, in fact, Lethal Injektion may be the coolest band around right now.  If you want to impress your mates while driving around, this is the album to put on your car stereo.  Immediate respect.  I seldom give a 5/5 rating, but I have no choice here.  It really is that impressive!