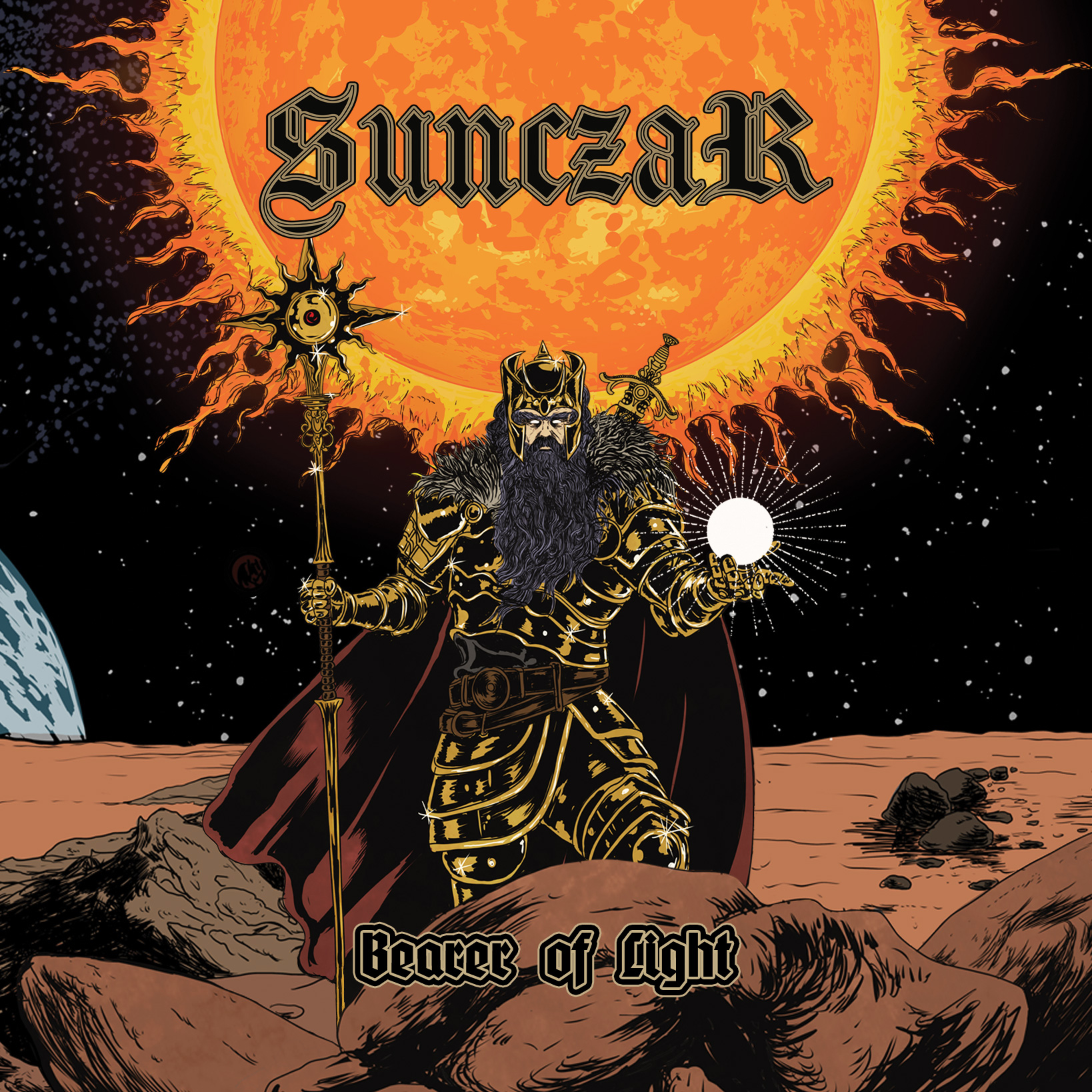 Frankfurt-based stoner sludge mob Sunczar will unleash their full-length debut on Argonauta Records next week. It comes just under two years after their first EP, ‘The Unveiling’, which was pretty much released just as the world began to close its doors. The plague hasn’t stopped the band in its tracks, though – with this eight-song statement of intent, Sunczar have made a positive start to the new year. A balance of hard-hitting grooves and a deep-fried, Southern-style approach sets out a very distinctive quality to their music that will appeal to many sludge metal fans, although Bearer of Light still knows how to strut its stuff, have fun and rock out when the time calls for it.

‘In Lux Veritas’ introduces the album in just under 100 seconds, setting the tone with powerful, melodic, sludgy riffs before picking up the pace to drop into the title track, pre-released as a single back in November. A midtempo stomp, it makes the most of heavy riffing, but with a laid-back quality to it, allowing you to either succumb to its force or relax as you wish. Sunczar energetically pick up the tempo to go into a headbang-worthy midsection in an exciting way, with tightly-controlled, precise instrumental work giving a real touch of flair. The chuggy breakdown at the very end is also great; Sunczar’s undeniable sense of groove is inextricably part of their sound. ‘Apathy of the Forsaken’ has an infectious Children of the Grave-style swing with a few subtle hints of modern groove metal heavyweights such as Lamb of God or Machine Head, although with a different style of intensity compared to those two. Later on, it develops into a brilliantly crushing Crowbar-style breakdown that would make even the most hardened of metalheads’ faces contort. The swaggering ‘Heresy’ follows, with a blistering guitar solo and a fun, catchy chorus making it memorable.

‘Blackness’ is possibly the heaviest song on the record, with hard-hitting guitar lines accentuated by Dimebag-esque squeals and pinches by axeman Alexander Vogt to add a nice bit of flavour to the track and some soul to its core. Sunczar tease the listener with a highly effective, slightly faster run, before bringing it back to the familiar groove to finish the song off. ‘Behold Your Saviour’ follows in this vein, with more monolithic Southern grooves and dynamic vocals keeping the ball rolling. It’s over ‘Through This Hell’ when Sunczar begin to show some sonic experimentation – the mournful clean guitars and clever tomwork on the drums create an undeniable atmosphere. Contrasted with a chorus that’s more uptempo, but no less moody, it certainly helps the song to stand out on the tracklisting. Featured on their 2020 EP, it’s understandable why Sunczar have opted to bring it back for their full-length, presumably to be heard by more people than last time. The second half of the record, for the most part, takes on a heavier tone to what precedes it, but final song ‘Back In Shadows’ – also originally premiered on ‘The Unveiling’ – re-injects a fun sense of heavy stoner rock into the record as it draws to a close. Distinct from what’s immediately before it, this change of tone again highlights the track. With infectious, feel-good vibes, it almost has shades of Buckcherry if they were a little more metallic. You ultimately end the album with a sore neck but a smile on your face.

The band’s sound, both vocally and instrumentally, unashamedly nods to the deep, New Orlean grooves of Crowbar and Down. Krsto Balic’s gravelly, distorted vocal style follows the path laid out by Anselmo and Windstein but matches it nicely with Sunczar’s style and individuality, which takes a bit more from heavy rock, rather than just ‘copying’ them completely. Similarly, the guitar riffing transparently descends from the Kirk Windstein school of playing, although Alexander’s playing style certainly has a unique sense of flair. This comes out a lot over the midsections of some songs when Sunczar switch up the sense of time or rhythm, with such deviations often being short but sweet. These changes to the formula arguably contain some of the best moments over Bearer of Light. Sunczar’s influences will be fairly clear to any seasoned metalhead, but they do show off with a few brilliant moments of real uniqueness. It would be exciting to see how they could run with those a little further next time around. Still, this is a good effort from the quartet – I can only imagine how well these songs will go down in a live gig setting. Hail.

For fans of Down, Crowbar, Pantera, and southern rock – preorder here