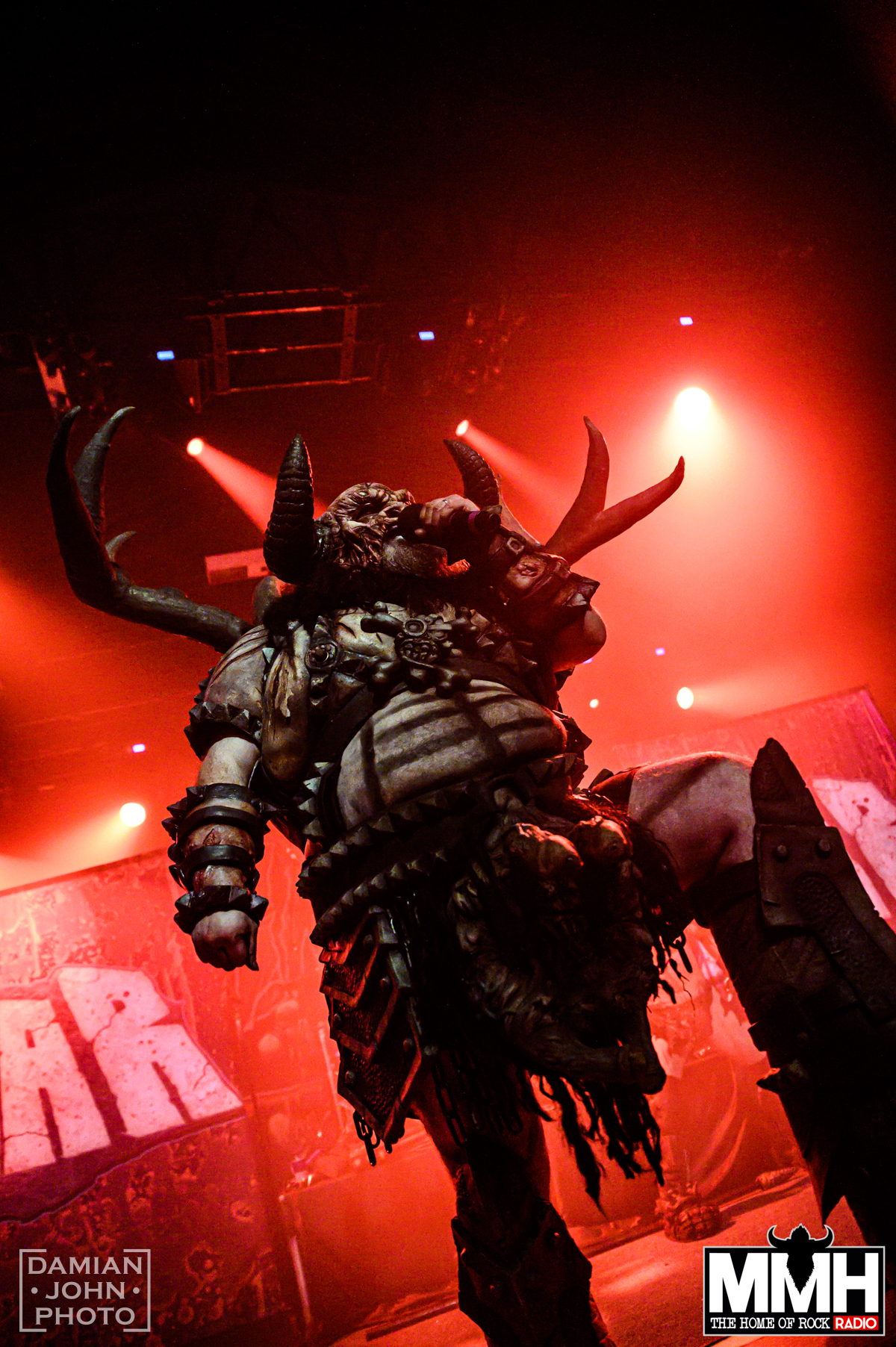 Let’s be honest ,currently there is little to raise  a smile with what is going on across at the globe at this time. A big thank you is required to The United Nations for inviting those Intergalactic Scumbag warriors GWAR to Earth to tour their new album Blood of Gods bringing with them in their wake their own unique message of love, peace and total human annihilation.

Childrain started the 3 band evening off with their Spanish twist of thrash metal touring the UK for the first time supporting their 3rd LP The Silver Ghost released this year. Brothers Ini (vocals) and Iker (lead guitar) blend vocals well and the bands style is much in the vain of Sepultura and they hit their heaviest point when the tracks slowed down.

Canadian thrash stalwarts Voivod are celebrating the 35th anniversary of their debut and groundbreaking album War and Pain and during that time only drummer Michel “`Away” Langevin has been the constant, Singer Denis “Snake” Belanger is close behind minus an 8 year gap in the late 90’s.  Age has not diminished the foursomes aggressive and off kilter approach which in places is avant garde to the point of being a punk jazz metal infusion. The band are touring their 14th longer plyer The Wake. I have never found them an easy listen but the faithful displaying the band’s name on T-shirts suggested that their fan base is still as strong. The final track of their set was the eponymous named first track off the said debut album Voivod which sounded as fresh tonight as it did the first time is saw them way back in the 80’s. Many a young band should look at these thrash veterans as a lot can still be learned as they are still relevant today as they were in the 80’s.

Voivod had mostly filled the hall during their set and by the time the headliners got on stage the 800 capacity ground were awaiting in equal measures of nervous excitement, anticipation and trepidation. The stage monitors, security and the poor souls in the photo pit were covered in protective items for they knew what was about to take place. Most of the crowd, especially up front it appeared did not. No one seemed to heed the warning at the entrance of the auditorium announcing that varies types of fake bodily fluids would be copiously distributed throughout the evening. This was not a health and safety announcement, it was a fact.

GWAR is more than a gig, it’s 60 minutes of intergalactic showmanship with heavy music interspersed with pantomime. If you look at GWAR in one dimension you have already missed the point. This is escapism, this is a release from the pressures of daily life. It is fun. Whatever your experiences of GWAR live are there will always be one irrefutable fact, and that is that you will never forget it, and can that be said about every band you have seen live? A show that appears this amateurish is in fact a well-oiled blood spurting professional machine, the musicians are not exceptional, but they are competent and to play any instruments in these conditions of nightly carnage is no mean feat. If the music needs to be discussed it was basic, brash, in places brutal but well executed, the riff assault of I will be your monster is pure rock n roll and is possibly the best song post 1986 Motorhead never wrote.The theatrics involve decapitation & disembowelment of world leaders, blood spirting crowd drenching on a biblical scale from alien creatures with oversized warped genitalia and self mutilating monsters. It is as subtle as a shark bite but less attractive but this is has always been GWAR’s battle plan.

Go and see GWAR at any cost as at the very least it will brighten up your human lives for a brief moment in time & keep your local launderette in business for a lot longer.

A contender for gig of the year

Listen FREE via the web site or our own app!