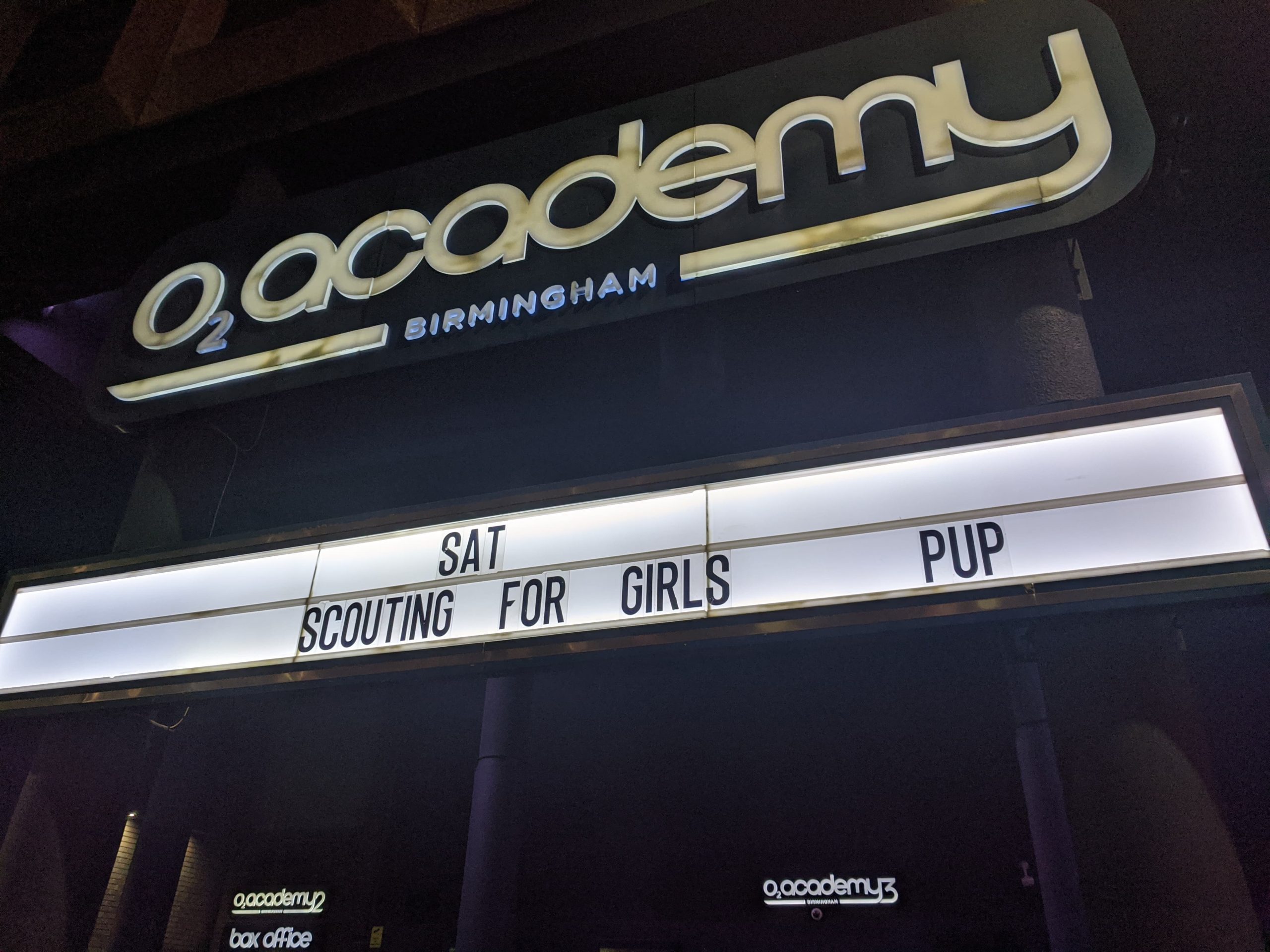 A rainy cold night in Birmingham did absolutely nothing to dampen the spirits of the droves of fans who turned up to see the pop punk Canadian quartet in the Academy 2. While the venue itself may be second billing, as are the acts who play it, there was an aura of anticipation and excitement for this show which was sold out well in advance, speaking to the loyalty of the fanbase of PUP. While Scouting For Girls played their mild mannered, radio friendly setlist to a crowd of casual music enjoyers, Fresh, Slotface and PUP were tearing through their vocal chords and guitar strings to a packed out, and very cosy room next door.

Fresh, a four piece from London led by Kathryn Woods perfectly warmed up the crowd with their upbeat, melodic and impossible to resist toe tapping tunes for an almost already packed out venue. The quartet were charming and funny, and make a real connection with the crowd early on in the set with some quick quips and introducing themselves as Scouting For Girls, a running joke amongst the showgoers in the queue beforehand, pointing out the vast difference in the appearances of those waiting in line for their respective shows. While Fresh kept things light, Slotface blasted through their 45 minute set with a grungier, heavier tone, by which point most of the crowd was already drenched in sweat and the room was starting to become rather sauna like.

A smoke break was needed, and while I stood outside I listened intently in to multiple people’s conversations. Most people had tones of pleasant surprise as to just how good both Fresh and Slotface were in their sample sized sets, a great advertisement for upcoming bands both led by two very talented women in Kathryn Woods and Haley Shea. I wouldn’t be surprised if their Spotify stream numbers received a bit of a spike following their performances here.

This is where the review becomes difficult, I tried my utmost to remain impartial as the four Toronto natives took their place on stage to headline, but as soon as the opening notes of Morbid Stuff rang out that went out the window. The crowd was hot all night, but when PUP stepped out and started playing, they were treated like mega stars by this Birmingham crowds. The 75 minute set flew by, and from the ferocity in his voice, you would have never guessed that Stefan Babcock was at one point advised to quit music altogether after severely damaging his vocal chords in 2015. The small venue lent itself perfectly to the atmosphere of this gig, which was quite unlike anything I’d experienced before. This felt like more than just a show, it was almost like a family reunion, and PUP were the sibling who we hadn’t seen in months returning home. The energy was chaotic and yet, friendly. Everyone was out to have a good time and even the mosh pits, while they looked a bit hectic, were kept safe at all times by everyone involved.

Just when it seemed as though things were winding down, and the crowd was gearing up for the end of the show, everyone received a massive second wind once DVP was revealed as the final song of the show, everyone knew that the next 2 1/2 minutes or so was going to be 100% limbs from everybody involved, and it did not disappoint. If you ever get the chance to check out a PUP, Fresh or Slotface show consider this a complete endorsement from me and every single person who was in attendance on Saturday night. PUP may have titled their sophomore album The Dream Is Over – but for these three bands it seems as though it’s only just beginning.