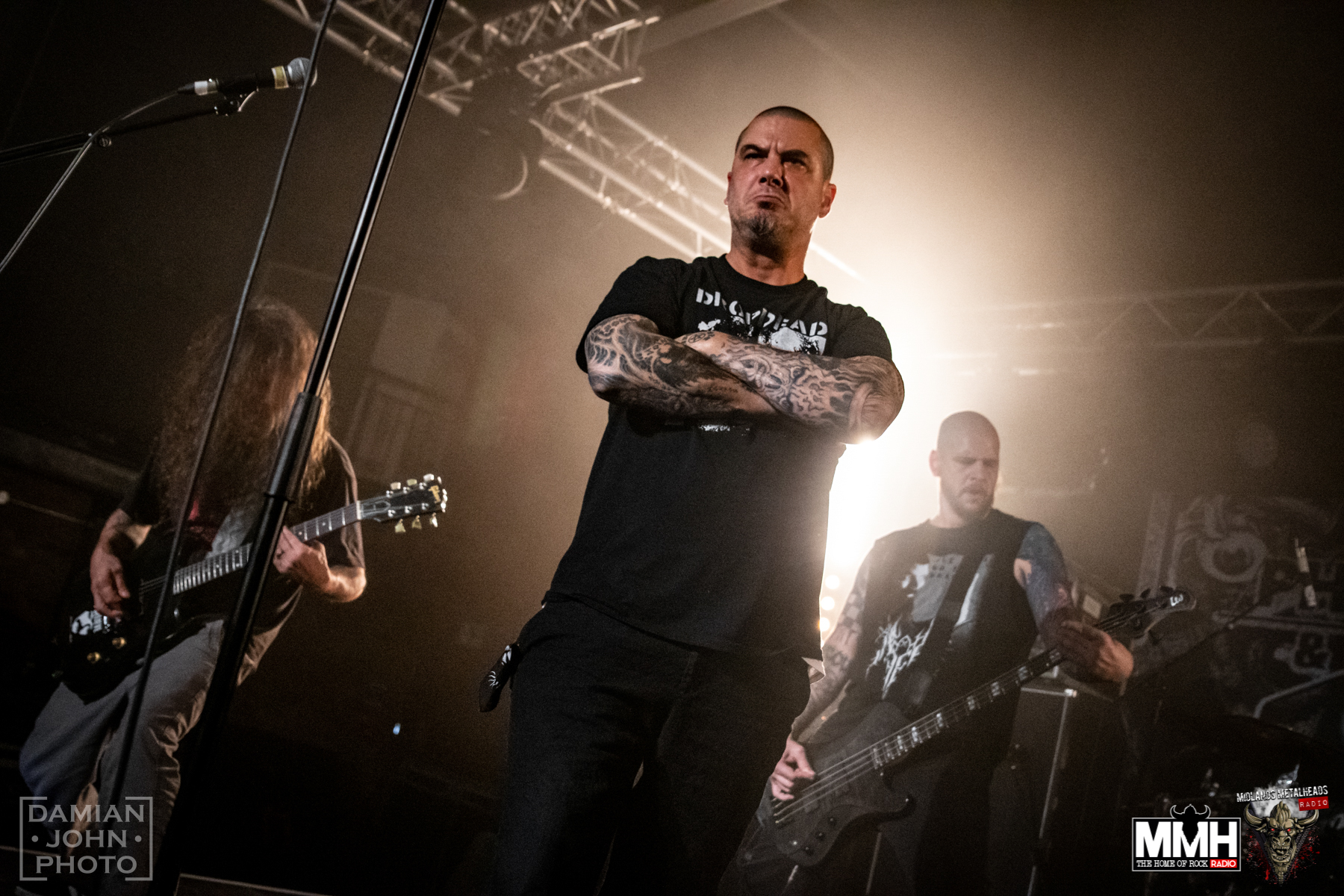 My instinct told me it would be better for a non mosher to take to the balcony tonight. The Mill has a decent amount of floor space but I didn’t think I would escape being hurled around it. It was a wise decision and there is a great roof garden, so I was able to grab some fresh air during a really hot evening.

Support tonight is the mighty Corby based Raging Speedhorn. Going back to 1998 this stalwart, pounding metal outfit are definitely the right choice to start proceedings. Straight in with ‘How Much Can A Man Take’ Frank Regan and John Loughlin, who share vocals, are staring us right in the face. ‘Redweed’ has those low infectious guitar riffs and ’Superscud’ is a mental metal rap. The band called it a day in 2008 and there was a long silence until 2014 when they reformed, now reunited with guitarist James Palmer and adding Dave Leese also on guitar, the sound is as formidable as ever. ‘Motorhead’ from the 2017 album Lost Ritual, has a more rockin theme and punctuated lyrics that make it a headbanger of a song. If you compare the older numbers like ‘The Hate Song’ from 2003 and ‘Thumper’ that was on the self titled 2000 release,  there is a  slight difference, maybe less angry and distorted, but still recognisable as Raging Speedhorn. They end with another from Lost Ritual, ’Ten Of Swords’ it’s slower and a hell of a mood swing. Andy Gilmore on bass and drummer Gordon Morison complete the line up, their heavy presence felt throughout the show. Raging Speedhorn have comeback from the grave reborn, with more energy and passion than ever.

Sadly the band had to pull out of the last show, the next night at The Underworld in London, as James ‘Jim’ Palmer was suffering with pneumonia. The good news is he’s on the mend and will be fit and well soon.

You can see them later in the year at the Bloodstock and Damnation Festivals.

The Mill is tightly packed as the main band appear on stage. There’s a massive cheer as Phil Anselmo acknowledges the crowd and then they dispense with formalities and dig right in with ‘Bed Ridden’. The band have released 2 albums ‘Walk Through Exits Only’ in 2013 and ‘Choosing Mental Illness As A Virtue’ last year, so we hear quite a lot from these. ‘Little F**king Heroes’ and ‘Choosing Mental Illness’ are put to the test and the moshers start to collide. It’s a mass of bodies down there, my instinct was right, but they are thoroughly enjoying it, I haven’t seen an audience so totally together for years. ‘The Ignorant Point’ is a jumble of noise, a mixed up experimental and ear ripping sound, like the dead screaming from the other side. The title track from 2013, ‘WTEO’ and ‘Mixed Lunatic Results’ follow on and Mike DeLeon on guitar is in his element, stomping the floor in wild abandon. Damian my fellow Metalhead is helped up onstage at one point and gets some photos from a different angle behind the band, awesome.

Of course the show has to include Pantera numbers, Anselmo’s well loved old project, so an encore of magnificence contains ‘I’m Broken’, F**king Hostile’ and a combination containing ‘Damnation’ and ‘Hollow’. Phil pays homage to those lost members of Pantera, brothers Dimebag Darrell and Vinnie Paul, before the last song, which can be no other than ‘Walk’. The place is storming, absolutely brilliant.

The tour continues around Europe this month.