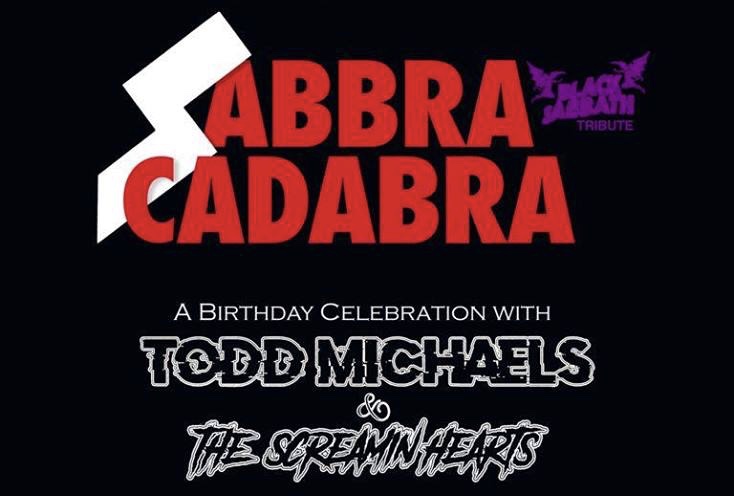 On the hottest day of the year Midlands Metalheads headed down to Scuffy Murphys celebrating the end of what has been an awesome week, crammed with Black Sabbath festivities. On Tuesday we were invited to the museum to get a preview of the Exhibition and take part in the press conference and Wednesday we witnessed the Bridge and Bench being named in their honour after watching the Sabbath tribute band, Sabbra Cadabra play on the canal island. So to cap it all our team, led by Stephanie Ingram and the Scruffy Murphys staff, organised a celebratory salute to Birminghams godfathers of Heavy Metal.

Downstairs MMH DJ Mitz gets things started by playing a mixture of classic tracks and the atmosphere begins to heat up. The room is filling up with punters as the multi-talented Pete K Mally, another of the MMH team, delivers a marvellous rendition about the world of rock music and some of his experiences, Pete is also our compere tonight. After interview’s with the popular MMH Lexi Frances, it time for the bands to start playing. Our award nominated photographer, Lisa Billingham is soon down the front preparing to shoot the pics included in this article.

TODD MICHAELS AND THE SCREAMIN HEARTS

It’s all about hair metal as the adorable Todd Michaels takes to the stage, with his band The Screamin Hearts. The Scruffy crowd see the Nottingham based sleaze lovers, whip through their performance, adding glamour and killer licks in the form of Patrick Van Der Vollering on Guitar and groove laden lines by Keri K Sim on bass. Playing all 4 tracks from the Debut EP and more, it was a packed audience, loving every bit of it. Jonny Sparks, was celebrating his birthday in true style, impressive guitar and vocals from the local guy. Dan Brown on drums was hardly visible as the faithful shuffled to get a good view, in the limited space available. Must see these again, they revive that time in the 80s when your man stole your eyeliner and best scarf. Damn good to watch and hit you hard with their present day, heavier version of glam and sleaze.

The tribute band from Manchester, SABBRA CADABRA met their idols on Wednesday, when Geezer and Tony arrived alongside their makeshift stage on the canal island, in a narrowboat. They made headline news for being chosen to perform in perilous conditions, with the wind blowing the banners down and ‘Ozzy’ struggling to stop them falling into the water. Tonight Kevin ‘Ozzy’ McGillian who is a barmy character on and off stage, has us in stitches with his antics and contributes to an already fun evening. Of course they play a monster of a set, 16 of Sabbaths best loved, ’Symptom of the Universe’ ’Snowblind’, ‘Killing Yourself To Live’ ’Sweet Leaf’ ‘The Wizard’ ’NIB’ ‘Iron Man’ ‘Fairies Wear Boots’ and War Pigs’ among others. All original Ozzy era stuff from between 1970/1978 and I liked the way they included more obscure numbers. Dressed in black with a cross around his neck, Neil Priddey who takes on lead guitar as Tony Iommi, is as cool and collected as his idol. Sabbra Cadabra are not your average tribute or cover band, they don’t play anything other than original Sabbath and keep it true to form. So it’s as near to watching the original band as you can get. The crowd increased as the music could be heard upstairs, everyone joining in and singing along. A successful and wonderful evening all round, hats off to everyone one who helped organise it.