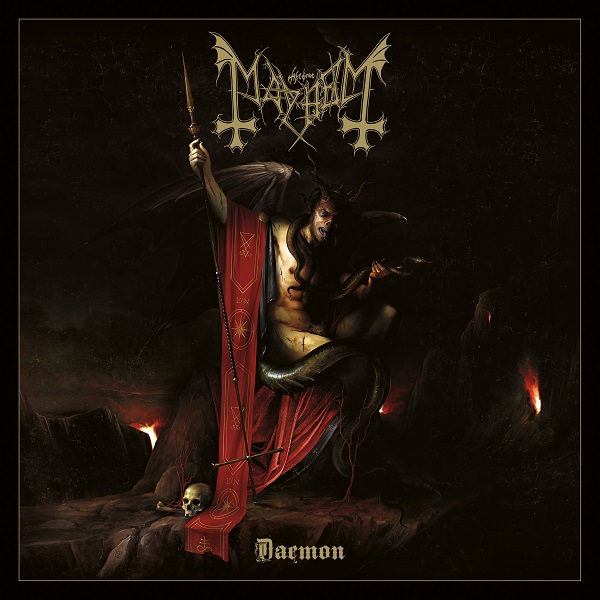 Mayhem are one of the world’s most renowned black metal bands, although some will say that their status is as much to do with the actions of their members in the early ‘90s as it is their creative ventures. Their output after 1994’s De Mysteriis dom Sathanas has been sporadic – Daemon is only their fifth full length in the 25 years that have followed their highly influential debut – but what they’ve lacked in quantity, they’ve made up in quality. Mayhem always try to instill a distinctive flair to each of their records, and this one is no different.

Both pre-release singles (“Of Worms and Ruins” and “Worthless Abominations Destroyed”) indicated that Daemon would be a blunt, to the point black metal affair, but this is not the case. It is certainly entrenched in the genre, as strains of the style run through every track, but it’s not your run of the mill release in the style by any means. It’s quite a busy record, with a fair amount of shifting tempos and layers to the music. It’s not as daunting a proposition as it might seem however, as although it will likely take a few listens to really grasp what’s going on in many of these songs, they’re all engaging enough the first time round to draw you in.

Whilst I find little fault in the traditional black metal material that Mayhem present here, I found Daemon much more enthralling when they move beyond these boundaries. “Agenda Ignis” exhibits some obtuse riff structures as it rattles along at varying speeds, with “Malum”’s slow and expansive introduction giving way to a black ‘n’ roll style bounce. Bonus track “Black Glass Communion” is of a similar ilk, but both tracks are caped in a wicked darkness that deflates any buoyancy that some might associate with such a tag. And that really is where Mayhem are most successful on Daemon – when they cloak the music in a dark, hellish atmosphere. “Aeon Daemonium” and “Invoke the Oath” are towering compositions, slowly building like the soundtrack to a grand, ritualistic incantation, with both settling into a mid paced black metal charge thereafter. “Daemon Spawn” is the best of the lot; a dense musical smog that smothers the cavernous backdrop and sees Attila unleashing a demonic entity from his throat. The venom with which he delivers his vocals is frightening at times, with his attack as diverse as it is convincing.

It would be unfair to single out Attila for praise, as all involved do a good job. Guitar duo Teloch and Ghul’s compelling guitar work is anchored by the formidable rhythm section forged by Hellhammer (drums) and Necrobutcher (bass), whose tasteful playing never strays into extraneous showboating. Hellhammer is one of the most reputable drummers in extreme metal, and he drops in some interesting beats and cymbal work between the sort of blasting and battery you’d associate from the genre, whilst Necrobutcher plays some nice patterns that deviate from the root notes you might expect. The bass is surprisingly clear in a well balanced mix, where everyone is given plenty of room in a sonic space that never comes close to feeling cluttered or claustrophobic.

I mused earlier about the impact past controversies had on Mayhem’s reputation, but their standing within the extreme metal scene is undoubtedly warranted based on their catalogue. Daemon is another successful addition to their relatively modest discography (numerically speaking), but if it takes Mayhem four or five years each time to consistently meet this sort of standard, then it’s difficult for me to complain.

Daemon is available on October 25th via Century Media Records, and can be purchased here.