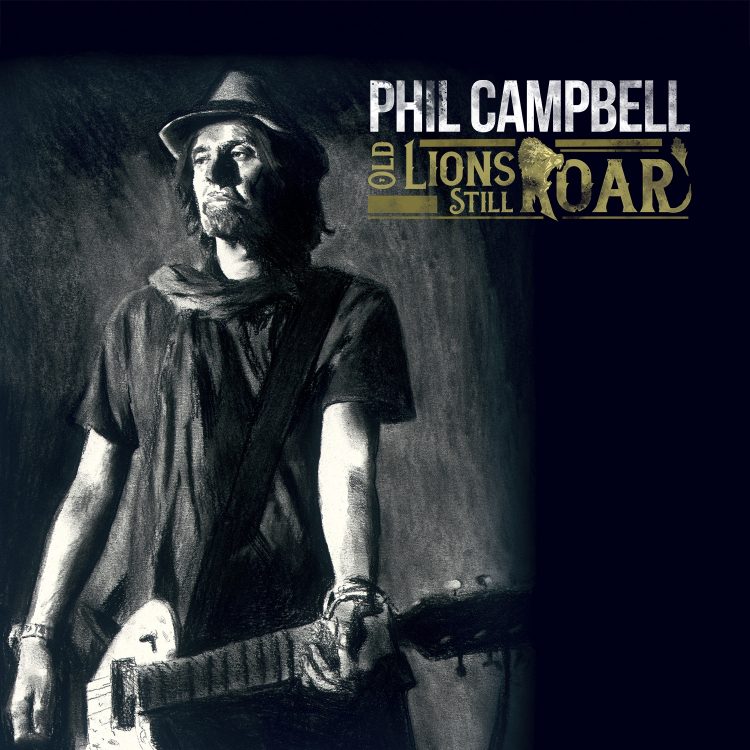 Phil Campbell has been musing over a solo record for the past twenty years. Whilst in Motorhead, Lemmy frequently encouraged Campbell to pursue this need for further creativity yet this never came into fruition due to Motorhead’s relentless touring schedule. With tragedy, there’s always a chance of regrowth and nothing says this more than Old Lions Still Roar rising from the ashes of Lemmy’s death and the disbanding of Motorhead. And there is absolutely no doubt that Lemmy would be proud of the exceptional breadth of creativity that this album showcases.

The opener is completely unexpected and refreshingly so. There’s no instant onslaught of classic rock riffs and wah infused soloing, although this rightfully emerges plenty of times throughout the album. Instead Rocking Chair is stripped back, content in its acoustic tones that possesses a bluesy and country – esque edge. With this relaxed back drop, there’s plenty of room for The People The Poet vocalist Leon Stanford to explore gentle tones and emotive moments. Musically its beautiful yet this beauty is emphasised further when focusing on the story telling lyrics of Campbell’s life, ranging from birth to the present day and his consistent determination to not sit “in no rocking chair, I’ll be playing in this rocking band.” It’s a stunning piece and truly heart-breaking when focusing on his relationship with Lemmy and the raw simplicity of lines such as “I want my best friend back.” Whilst listening to Rocking Chair and its informal nature, it feels like such a privilege to be given such a deep and personal access into Campbell’s thoughts and past, something which is not achievable through guitar alone. It’s a wonderful example of the beauty of musical sentimentality and the emotions that can be mutually shared by the creator and their audience.

Straight up immediately abandons any possible chance of acoustic playing with the tone shifting into Campbell’s speciality of classic rock riffs that prove difficult to forget. This assurance of memorability is intensified with the Metal God himself on vocals. Like Campbell and his acoustic country playing in the previous track, its so fresh and interesting to hear Rob Halford draw back from his realm of heavy metal and sing on a track with a hard rock flavour.

Swing It has such an explosive attitude from the very beginning, both through the swaggering hard rock riffs and that intrinsic Alice Cooper snarl. It couldn’t be further away from the following unapologetic ballad Left for Dead featuring Hands of Dimes vocalist Nev MacDonald. With its acoustic guitars mixed with wailing solos and the merest hint of an organ, MacDonald is given full reign on exuding his passionate vocals which simply sounds immense in the chorus. It’s an impressive shift from prior tracks but admittedly more skippable, especially with the following track being such a fine exhibit of metal and it’s menacing qualities.

Walk the Talk is simply fantastic, featuring the unforeseen fusing of Danko Jones on guitar and Nick Oliveri of Mondo Generator on vocals. The opening riff is slow, low and heavy with fuzzy distortion, kicking off into an increased tempo alongside Oliveri’s emphasised vocals. The vocal melodies are so unexpected and brilliant in the chorus, alternating between soaring highs and lows whilst becoming more unhinged as the song progresses. Oliveri practically descends into insomniac insanity with one of the final lines of “Another night without sleep, oh I think it’s been a week.” With the middle section being pure instrumental bliss intensified by pounding drums and superb soloing from Campbell, the whole song is charged with complete and utter adrenaline throughout.

As the first released single of the album, These Old Boots features a masterclass of talent from Dee Snider, Mick Mars and Chris Fehn. With Campbell leading the way, it’s a fantastic mash up of ex Twisted Sister, Motley Crue, Slipknot and Motorhead combining as one. Dee Snider is another fine example of heavy metal pioneers refusing to slow down as his vocals sound strong and empowered throughout. The song itself is brilliantly infectious and features subtle rock n roll twists such as the cowbell in the intro and chorus. Mick Mars delivers a fantastic melodic solo that adds a unique and fresh twist to a song that exudes the talent of every individual involved. It’s simply bad ass and like Walk the Talk, it’s a true highlight of the album.

As Old Lions Still Roar begins to reach the end, Campbell still continues to maintain a consistent high level of quality and surprises. Dancing Dogs (Love Survives) is another great metal track with an explosive middle section where Campbells vibrato and prolonged notes creates a psychedelic vibe that perfectly parallel’s with Whitfield Crane’s slow and ascending vocals. Dead Roses is the biggest revelation of the album, a piano led sorrowful ballad with delicate vocals from Benji Webb, completely removed from his traditional vocal style in Skindred. With the song focusing on desolation and missing someone close, Webb is incredibly emotive and vulnerable throughout, intensified further through whispering backing vocals and subtle melancholic guitar from Campbell. It’s a truly beautiful piece and emphasises the sheer talent of the two for effectively stepping out of their comfort zone with resounding success.

The final track Tears from a Glass Eye is as stunning as it sounds. Led by guitar virtuoso Joe Satriani, it’s a nostalgic acoustic instrumental that’s beautifully calming whilst encouraging escapism. Its a wonderful and perfectly fitting conclusion to such a richly varied album.

That’s what makes this solo record so brilliant – the sheer breadth of variety. Campbell’s talents are demonstrated across a vast range of styles, some that audiences have rarely heard Campbell play. For this reason, Old Lions Still Roar is a fantastically engaging journey as the listener is unable to anticipate the exact genre of the songs and so every track is fresh and exciting. There’s no doubt that the classic hard rock and metal tracks are brilliant in their own right yet it’s the addition of ballads and country style acoustics that not only elevates this album but solidifies Campbell as a richly varied and talented guitarist.

With this debut solo album and talk of a new Bastard Sons album in 2020, Campbell is far from slowing down and instead proceeding to roar with the heart and soul of a fierce and sagacious lion.

Phil Campbell is a part of Nuclear Blast Records.